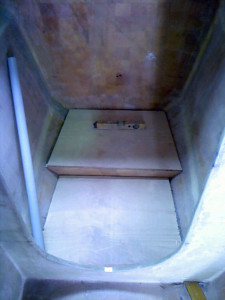 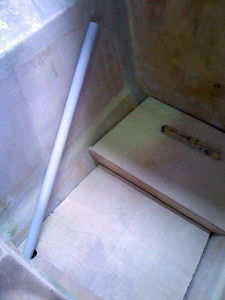 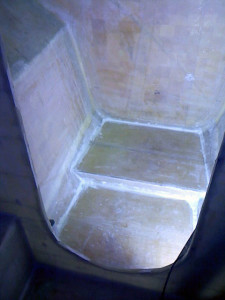 In the meantime, with the shower pretty much finished except for glassing that last panel in, then the fairing and painting of it, and of course the fitting of the shower rose and mixer tap, I moved onto the laundry floor. I was originally going to leave this section without a floor but the narrowing of the hull meant I needed some elevation to get the width back for the washing machine base to sit on. So I put a floor in. Again I was going to take the easy route and put a single ply sheet in with some webs under to support it and then thought, no, why give up the head room un-necessarily when a change in the height of the webs and cutting the ply sole in half and I could keep the headroom and elevate for the washing machine, so we now boast a split level laundry, 70’s style! I intend to build a small cabinet to hide all of the wiring and plumbing that will eventually cross this little room, and because there is now room, I will put a laundry basin in too. But wont come back to that until all of the wiring and plumbing is in.

So with the shower floor in and the laundry floor in, the only section of the boat left with a floor not glassed down is the bathroom. (There is only one section of the boat that has no sole that is open and that is under the aft bunk in the starboard hull, there are other sections that dont have soles, but they are not accessible inside buoyancy areas.) But the bathroom floor is one very busy section. I have decided that the port sump ought to have the through hulls inside it, so that should they ever leak, they are easily accessible and more importantly they are inside a watertight compartment with a bilge pump constantly active, so if the leak is slow, the pump would handle it and expel the water, via the holding tank, back overboard. So there are a lot of pipes coming and going. And just to complicate matters further, the toilet is on the opposite side of the hull to the passing power, water and holding tank so all of this has to cross the floor, under it because I want it hidden, but able to be accessed should it ever need to be replaced. It took a lot of thought but it all came together.

The first pipe into the sump was the shower and laundry drain. These went in when the shower floor want down. Then I drilled the various through hulls. There are 3. One is the waste water (both black and grey exit through the same through hull via a T join above the through hull) one is salt water in, again I have split it with a T join over the through hull, one side goes to the toilet intake, the other side goes to the watermaker and deck wash which would be on the rear steps so running past the watermaker. I intend to run the toilet with fresh water but I will have a Y tap and allow the toilet access to salt water in case at any time we are running short of fresh water. Its a contingency and probably wont ever be used but its better to have the option than not. The third through hull is the transducer for the depth sounder and speed and temp log. This had to go in the middle of the hull. The reason I covered earlier. The speed log wheel needs regular cleaning and the method is to unscrew it, pull it up into the boat which instantly starts sinking your boat, you then put a plug into the hole while you clean the wheel of growth and weed, then you reverse the process. In order for this to be as smooth an operation as possible I wanted the transducer in the middle of the sump lid opening. Ideally you want your waste out and salt water in as far apart as possible but because I want both in the same sump I put them as far apart as I could, but putting the waste out on the angled chine, and the fresh in on the keel board. I will have a strict rule that you must close the waste seacock before operating the watermaker, that way if anyone uses the toilet the waste is held until after watermaking is completed.

One other problem I had was that I might want to close off the black water but the grey is fine to keep going overboard (in some places grey water can still go directly overboard and only black must have holding tanks) so for this reason I did not put a single stop cock directly on the through hull. In retrospect I wish I had an additional tap directly on the through hull as an additional back up but its done now and its not a critical mistake. I have pipes running off the through hulls, under the floor to the outboard side where the grey holding tank is (behind the daggercase) and the pipes under the sole is below the waterline, so because there is no separate stop cock on the through hull these pipes will always be flooded. And these pipe are running through the sump wall into the next chamber which is sealed for buoyancy. The pipes are pvc. I am not happy with pvc pipes being permanently open to the ocean and running through a dry section but pvc is the only material you can glass to. Epoxy wont stick to either poly pipe which is semi flexible and does not crack when it moves but epoxy wont stick to it so as it goes through the watertight sump walls the seal through the bulkhead has no integrity. The same is the case with any of the metals. Epoxy will not stick to it well enough to ensure that it wont lose its seal through the wall, so if the boat flexes at all the seal breaks and your sump is no longer watertight and worse, the place the water goes is glassed under the floor and there is no access. Unless I have access ports on them and I dont want to do that. So PVC is the only solution.

The runs are very short, no longer than 400mm before the next point they run through another wall and are glassed in so to be absolutely sure of extra strength and watertightness I double piped them all and glassed the outer pipe. So the actual pipe the water runs through is inside another pipe so it has movement and the outer pvc pipe is glassed along its entire length. I cant imagine this could ever leak unless something enters that cavity from outside the hull, and if that happens then I have a hole in the boat anyway and the pipes wont be my major concern! Still I probably should have fitted a stop cock on the through hull. I figure a leak if it occurs is happening inside a cavity I cannot see (I will see water in the cavities themselves should a pipe ever leak because I have left inspection holes to each side but cannot see the actual pipework but with the inspection openings on each side I will also be able to insert a bilge pump hose and pump water out of the cavities) and that being the case, if you cannot see the leak and have a stop cock on you would have it open anyway, the point where the stop cock becomes handy is if you discover the leak and want to repair it, but that would involve ripping the floor up and if it ever happens then that will be the point where I have to dry dock, pull the through hull out and replace all the pipes, and at that point I will add a stop cock at the through hull.

With so many pipes going through this section in front of the sump it became easier to glass some of the pipes to the underside of the floor before the floor is glassed down. This ensures they sit exactly where I want them. One such pipe is the first section of toilet waste from the toilet across the floor and emerging inside the vanity cabinet. I have made the underfloor section as short as possible so that should it ever block I can reach from one side to the other with a pipe unblocker. The next section that attaches to the underfloor I have made so it can be unscrewed to give access to that one underfloor section easily. From the top of the pipe that can be unscrewed will be attached a removable hose for a meter, then through the bulkhead by pvc pipe again (pvc and glass layers) then up another meter to the U turn at the top of the tank. Each section is less than 1 meter and can be unblocked along the way. The total travel of the toilet waste is about 3.5 meters, of which about half is up (1.6 meters from under the toilet to top of the tank and I am assured the pump can lift that far and that high). The final pipe into the sump is the bathroom vanity waste and the kitchen waste joins it. But I want the kitchen waste to go directly overboard wherever this is permitted. In other words I only ever want to send the kitchen waste through the sump when I am in an area that strictly forbids any discharge (nil discharge such as Great Barrier Reef Marine park) because kitchen waste often contains scraps of food or food particles that rot and smell when trapped in the sump. As it is I am putting stockings as filters over the exit pipes into the sump to catch body hair so as to minimise maintenance of the sump pumps and sump cleaning but food particles add another dimension if it is not compulsory to trap it. So the kitchen (and dishwasher) waste will pass through a Y valve, one way through will direct it straight overboard via a through hull above the waterline on the chamfer panel, and if I must trap it, the other side of the Y goes into the sump waste pipe and below the Y valve the bathroom vanity sink waste pipe joins the pipe on its way into the sump.

From the sump up to the grey holding tank is a flexible hose attached to the pump, then through a through bulkhead fitting, then another section of the flexible hose connects the other side of the through bulkhead fitting to the top of the holding tank. I had to use hose rather than pipe because I fitted the hose after the daggercases were in so I could not get into the space to glass pvc in, and this way the hose can be removed and refitted if need be.