A full 8 hour day today and it was hot and hard work. I managed to get the keel panels glued and have got the next 2 hull panels (3 & 6) which are the first angle from the keel, you could call them bilge boards, fibreglassed ready for gluing tomorrow. Brett suggested a great method for gluing the panels which also is a great method for anyone (like me) that has to work alone. Instead of temporarily attaching all the panels and then removing them to glue them, I attach the panel in the same way, with just screws but no glue yet, then remove all the screws except the ones into the 2 mdf temporary bulkheads at around the centre of the boat (tbh2 & tbh3 which are between b/h5 and b/h6, the saloon space) which will keep the panel in place but away from the bulkheads for gluing.

You then work from the centre out to the bow and stern one bulkhead at a time, which means you can work at a less frantic pace. You don’t have to glue all 9 bulkheads before attaching the panels. Which is a great thing. I mixed enough glue (resin, hardener and microfibre blend 403) for what I thought would be 3 bulkheads, only 2 pumps of each plus filler, and I barely got 1 done and the glue was already going off and I managed 2 before it was gone. So there was no way I was going to be able to glue all the bulkheads before attaching the hull panel.

As I have mentioned there are a few minor errors in the kit cut all minor and fixable, the first was the addition I made to bulkhead 8, there is also a problem with the chamfer panel (I don’t yet know the extent but hopefully Brett is going to help me fix that one) and there is also a gap between the keel panel. To fill it I will cut up off to shape and glue them in. No big deal, this is just a core and the whole below waterline section will be over glassed inside and out. The gap is no more than an inch as the pic below shows. You may recall I placed timber blocks at the bow because I didn’t think the screws would hold in balsa because of the load, well they wouldn’t pull down enough into the blocks and the screw heads pulled through the keel panels. I used ratchet tie down strap to hold it all in place which the glue sets overnight and I also made some fibreglass webs as an addition to hold the bow down. It looks messy but I will grind it flat. The timber pieces are washers to stop the screws pulling through. 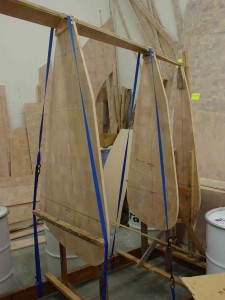 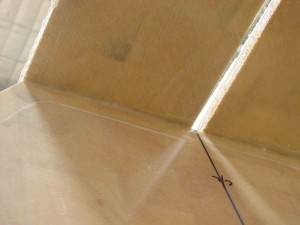 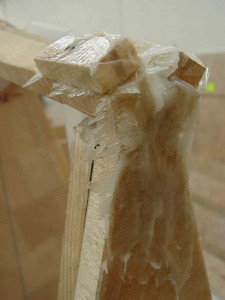 After the keel panels were secured, I went to work fibreglassing the inside of the next 2 bulkheads, (the bilgeboards). First I removed the peel ply from where I needed to attach glass or glue to bulkhead. Then I cut the glass to size from the roll. Then I mixed just resin and hardener and brushed it onto the panel, placed the glass on and “wet it out”. This means that the glass is completely soaked through from top to panel. You can see the cloth change color from silvery white to an opaqueness that takes on the color of the board behind. The change is clear. You can see the change in the pictures below. The trick here is to put just enough resin on to wet it out without putting too much on, it all adds weight and is not necessary. More does not mean stronger, just heavier.

I try to keep the glass inside the perimeters of the board because any overhang will need to be ground off when set. It is not hard but more work. And be careful of the overhang when it is set because the glass is as sharp as needles and it is like a saw edge and can tear you open if you rub against before you grind or cut it away. 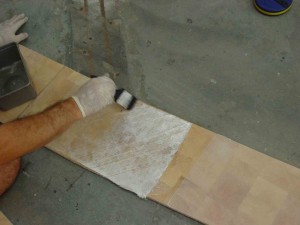 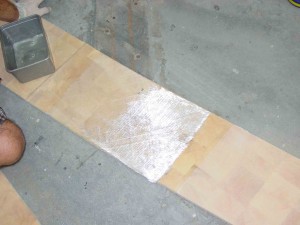 One final note. I went through 5 brushes today. The glue was going off faster than I could clean them anyway. I mentioned earlier that it was better to buy quality tools as it ended up cheaper. Not true in all cases. I buy cheap brushes from the Warehouse at .50c to $1 each and throw them away rather than use Acetone or thinners. The acetone is $40 for a 5 litre can! Its cheaper to throw brushes away than try to clean them. Jim in the US tells me that vinegar makes a good solvent. I will give it a try.