On Thursday I was invited to sail on Warren’s 40ft Crowther cat from Swansea (Lake Macquarie, NSW Central Coast) about 60 nautical miles down to Woy Woy, just north of Sydney. The forecast was for NE winds 10-15 knots for most of the day (perfect for our trip south) swinging to SE later, but we would be close before it swung around. Unfortunately there was little or no wind most of the day (even after it swung around) and we motored all the way on 1 9.9 outboard at about 6 knots and the trip took us about 10 hours instead of the planned 5 hour sail (you do the math). I had a ball regardless. I have never been out in the ocean before so had never experienced swell, and whilst the sea was glass flat most of the time and I understand it wont always be like that, it was a nice introduction to coastal cruising. We tried the spinnaker early but there just wasn’t enough wind to keep it up. The wind did add a knot to our speed, with no sails we were making 5kn and with sails around 7kn most of the way. 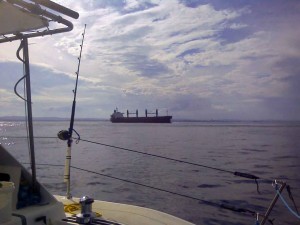 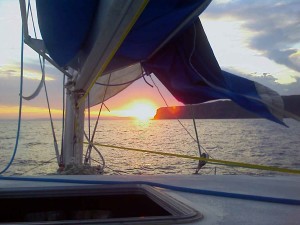 Today I finished the planking of the port bow and glued it. I started early (about 8am) to get the work done before the shed heated up for the day and entertained visitors for an hour (entertained means one of my favourite pastimes, talking about my boat and boats in general). As is usual with everything done the second time on this build, I was faster and neater and overall did a better job on this panel than the Starboard one. 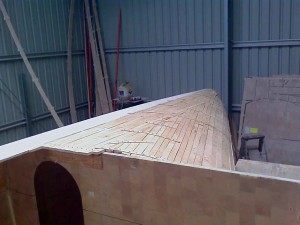 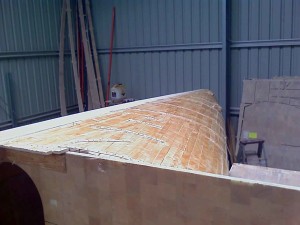 Tomorrow I will sand this panel and glass it. I will then have to remove both panels to sand and glass them on the inside and return them to the boat to set. Once done, I can start on the forward deck turn planking. On some builds this panel is made by kerfing a flat duflex panel or 2 halves joined in the middle but I don’t seem to have panels like this so I will be planking them.

If I don’t get a chance to post again in the next 2 days, have a happy and safe NYE and I hope 2008 is happy and productive for you.