When I left off in December last year I mentioned we were struggling a bit. Well it got worse before it started to get better and is still no better than it was in December but things are finally improving. Its fair to say that I gave up hope for a while there, but thankfully I have a lovely and loving wife that encouraged me to keep fighting. I also have a number of friends, most I have never met, that sent encouraging emails to keep going. Some sent pictures of their launches. They helped, (sometimes it was hard not to feel jealous that they had made it to the end and I still have not), in that most have been building for as long as I have and I have known them for their entire build so that helps in 2 ways, it says I am not alone and that others have taken just as long so dont be hard on yourself and it shows that keeping at it will yield results. So I have kept at it.

Sadly I have not been posting the small jobs I have completed over the past year. Because they have been small jobs. But I have been taking photos so I will endeavour to bring the blog back up to date. And will try to take Jo’s advice and post more short blogs rather than less but longer ones. Money is still preventing anything really exciting from happening. Every now and then I get some savings together to buy something needed to complete the build, such as recently I had a run of work and found myself with an extra and unexpected thousand dollars, so knowing these opportunities have been few and far between recently, I immediately used the money to buy hydraulic steering. As has become customary, I bought the system in the US, where pricing is about 30% less than here. I would have liked to buy Hydrive but the Uflex system I bought in the US was $1600 delivered compared to about $2400 for the local equivalent. Without getting into a whole sociological discussion about the reasons for it, until local manufacturers and importers and to a lesser extent retailers come to terms with the now global market for goods and services they are going to continually lose out to self importers via the internet. It’s just a fact of business life now.

Until the boat is completely constructed, fairing will not commence and whilst we are close, the stern is still not yet closed up. Its pretty much all that is left externally save for the mast post and sheeting position arms and the ply pads for winches and blocks. I still have no idea how I am going to finance the mast posts. They come to about $8000. In the past (when we first started building) that was 2 months savings. Now for example, in the past year and I could barely save $2000 so you can see part of my current bind. What I think might need to happen is that we finish the boat without a rig and launch with outboard power only, and maybe after a year or so on the water, not having to pay the shed rent, I can save some money and pull her out again, fit the mast posts and re-launch. Dont even want to think about the masts themselves.

So what have I done in the past 11 months. Each has its own details so a blog on each will follow. Here is a list.

De-cored deck skin and replaced balsa core with solid glass under the bow and midships deck cleats. (Stern cleats will get mounted when rear steps are made).

Cut portholes out (including de-core and backfill with uni rope)

Cut escape hatches (including uni rope backfill) and build fairings around them.

There were also a number of small jobs that needed finishing such as the plans call for a ply pad between the ends of the forebeam and the inside of the hull panels. Many of these were so small that I cant remember them, just that they were done as I thought to do them.

It doesn’t seem like much work when written as a list. I didnt even turn up at the shed for Jan and Feb during my having given up hope stage! And I didnt have money for resin until May. I did a few things that didnt need resin or other material I didnt have money for, but it was difficult to maintain motivation when it seemed hopeless. But that changed and work progressed slowly. I have also helped a friend glass and bog his 36ft Easy cat. Sounds like I am trying to justify my time. I’m not. The boat progresses albeit slowly and whilst I wish it were finished I am happy all the same. One day it will be finished. Hopefully by me! In the next few weeks I will start posting blogs on each of the listed jobs and more as I start to finish them. 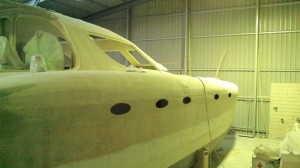 For those rejoining the blog thank you for sticking with me, for new readers, welcome, hopefully you will see me through to launch from here.