I didn’t do much on the boat today. I wandered in mid afternoon primarily to check that the highbuild was setting ok and to change the wheels on one of the cradles. The wheels I originally put on were supposed to be rated at 65kgs each so 4 should have given a nominal load rating of 260kgs and the weight of the hull spread over 2 cradles should have been capable of 520kgs. I guess it doesn’t work that way because the wheels on the forward cradle collapsed almost immediately. I didn’t worry about it too much as I don’t need to move the hull around much but I had some time today and decided I wanted to solve this issue. I bought 4 more wheels rated at 75kgs each to try. The 100kgs are much bigger again, which isn’t a problem but they raise the hull off the ground further and have a huge footprint that I thought they might be too big for the cradles I have but if these fail then I will have to go to them. We will see. 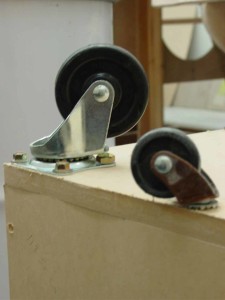 I am very happy with the way the resin and highbuild has gone and the tapes are a lot less visible through the highbuild this time than last time which gives me hope that the sanding will be a little easier. All I did to the hull today was to remove the skirts.

So the hope now is that I can get this coat of highbuild sanded during this week, last time it took about 4 hours per side of the hull, so if I get 3 or 4 nights in where I can sand for a couple of hours each time I should be applying the second coat next weekend. So I don’t think the hull will be finished this month but it should be finished early next month. The Schionning Muster is mid month and I hope to have both hulls finished by then.