Working on bits that hang out over either end of the boat. The davits hang far enough out over the stern that sanding them after they are glassed in would be very difficult if not impossible given their curves and edges. I have run bog over them and sanded it back a couple of times, then spot filled to finish them off ready for highbuild. And just as with the bog, it will take a number of layers of highbuild to get the finish required.

The finish required is top coat quality. Because once these overhanging parts are glassed in the only other work to be done to them is actually applying the top coat. In other words, other than the type of paint used, the final layer of highbuild has to look as though it was painted with top coat. The difference is just the paint used not the finish. The difference in the paint is that highbuild has a high solid content designed to be sanded back off again whereas top coat is designed with the properties of a paint system that will have to stretch and contract each day as the boat heats and cools, withstand sun (UV) and salt and retain its finish whether that is high gloss, satin, or whatever.

The davits have an axle at the end that will have 2 sheaves on it. The hole was over-drilled then back filled, including a de-core under the skin using a 90 degree fine point scraper, back filled, then re-drilled in the correct size into the resin. 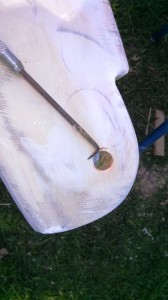 A well finished surface will look like it. And that takes a few coats and between each coat is another sand off with ever finer paper (most boats are sanded between 5 and 7 times in all, that’s a lot of sanding, every part that’s painted, sanded 7 times!) The first thing that becomes obvious is that the white paint, even though its not top coat (or glossy), immediately shows out every little blemish you are hoping to hide. 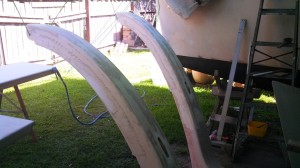 One of the major problems with epoxy bogging and fairing is pinholes. As you sand they fill with dust and become almost if not completely invisible. Until you blow the job down with compressed air. Then the dust is removed from the pinholes to reveal just how much work is still needed. There are numerous ideas on how to deal with pinholes and if you only have a few left filling them with highbuild might work, but with the number I have only another bog run, albeit really really thin and not all over but just in areas that have the pinholes may be the only answer. There are way too many to fill them one at a time. The great thing about highbuild and epoxy is that they are essentially the same chemistry so you can bog over highbuild and highbuild over bog. 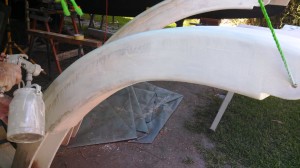 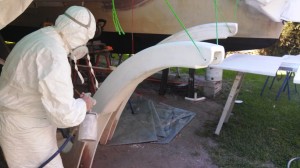 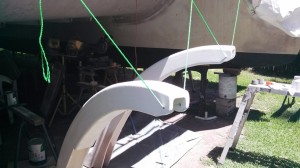 So having sanded and shaped the davits to the point where I thought they would be ready for highbuild I took them to Terry’s to have him spray them along with jobs he has ready to highbuild. I am going to have to get my own highbuild soon, buying in bulk is much cheaper than buying small quantities. But for this small job Terry was kind enough to do them for me. 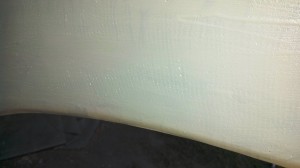 So next task is to sand them again, this time with about 120 grit paper. I started sanding the bog with 40 grit, then on the second bog pass I used 80 grit. After this sand is another coat of highbuild and a 240 grit sand and hopefully then it is ready for top coat.

Whilst doing the davits I have also been thinking about how to solve a problem I have been trying to solve for some time. I have been wondering how to hinge the ladder over the forebeam. I have always pictured how I hoped it would work and in the end the solution was pretty much how I had envisaged it all along, except I thought I would have the brackets made from stainless steel. In the end I decided that I could make the side connection brackets from solid glass and they would be strong enough.

The ladder connects to a 12mm stainless steel rod that also acts as the axle for the bow roller. The forebeam has 3 plates attached to it, one on the left of the ladder, one to the right of the ladder and another about 100mm to the right of that to house the bow roller. The bow roller will only ever be used when attaching to a mooring or when the emergency anchor is deployed, as the actual every day anchor comes up through bottom of the catwalk.

The ladder sits below the height of the top of the forebeam when stowed (under the actual catwalk) and must be able to hang down at 90 degrees to the catwalk or 270 degrees from its stowed position, when in use as a ladder. And must carry the weight in the vertical position. But most often it will be a gang way to jetties when in nose first. This is 180 degrees from stowed and will have to carry horizontal weight. 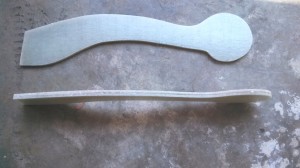 I think the solid glass brackets I made will handle the load. After all, the most actual weight they will ever be asked to carry would be about 100kgs. Not a lot of weight for 2 brackets each 14 layers of uni glass and a 2mm chop strand middle. They have ended up 12mm thick, solid glass. I experimented with about 10 different cardboard templates before I settled on the final shape. 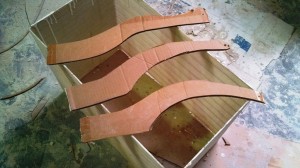 When I had a shape that did everything I needed I cut 28 strips of 457g uni glass (24 running fore and aft, 4 running top to bottom) and 4 layers of 457g double bias and laid them in a pancake on a layer of plastic sitting on a smooth piece of mdf , with the double bias on the very outside of each plate, then 7 layers of uni varying slightly the direction of the strands with each layer to spread the load, then another layer of double bias, then the 2mm chop-strand plate, then another double bias, 7 layers of uni again and finally the last double bias. To finish, another sheet of plastic and slab of mdf and then placed 2 x 24 litre drums full of resin on top to flatten them as tightly as I could short of vacuum bagging them. I regret that I did not use peel ply on each side as this would have finished them beautifully.

When set we cut them with a jigsaw to shape. I am really crap at jigsawing so Terry volunteered to do them. To compensate for my crap jigsawing I usually over cut them and grind them down to the line, but Terry cut them so well no grinding was necessary. All I need to do is sand each face and round the edges.

The reason for the shape chosen is directly related to the shape of the forebeam, where the ladder rests when stowed and what it must clear in the horizontal (swung over 180 degrees as a walkway) and vertical (hung over 270 degrees as a ladder) planes, mainly this second one. The front edge of the forebeam cannot cause the ladder to stop rotating until at least past directly below the beam, if it stops it any sooner then all the weight of the person on the ladder is pressing very hard against the beam rather than hanging from the steel hinge bar. That explains the earlier and deeper curve along the top of the bracket compared to the shape of the bottom of it. The top of the bracket becomes the bottom and then the back of the bracket when swung all the way over and the deeper indent is to allow the bracket to clear the forebeam when hanging from the front of the beam. The large round front is to give the front plenty of meat in it because this is the area through which the 12mm stainless steel axle goes through and will take the most stress and risk of breaking.

So next step is to drill the axle holes in the beam plates first. The holes must align with the steel axle level and uniform distance from the front of the beam. Then once they are drilled I can drill the holes in the ladder plates. Once this is done the ladder can be attached to the plates, with screws at first to align everything and make sure it all works, then once satisfied with that, glass it all in. And whilst all that is going on, sand the forebeam, and glass the rudder tubes into the sterns. Rudder tubes must be glassed in plumb and square and at the right height (height not so critical).

So I have a bit to go on with over the Christmas/New Year period. Jo and I are not that much into these holidays, she likes Christmas (mostly for the Carols and the crap TV) I dont, I like New Years (mostly because each NY I promise next year will be the one!) she doesnt, but we can take them or leave them, they are just days. One thing is true though, lots more nutters on the road and shopping malls are a nightmare, so stay safe all.

Thanks for hanging in with us this last year. Is next year finally going to be launch year. I have thought it so many times I am not willing to call it. But after the rear steps go in, there really isnt much else to build. It becomes mostly cosmetic from then on. And whilst fairing is a long, slow, painful process, really? how long could it take?