Another 6 hours of sanding today and I have now faired half the hull, the outboard side. Well almost. I still have some low spots to fill in and re sand but overall I think the bulk of the work on the outboard (and most visible) side of the hull is done. I will also build the chine in the middle of the hull above the waterline a little further so that I can fair this line properly. I have not yet hit the hull with the long fairing boards. I will do this after I have filled the low spots and built up the chine. I don’t think there is much to do, it looks and feels quite fair.

A further note on the Bohler, because of its super slow rotation speed it seems to create far less dust in the air than a regular orbital, and the bulk of it goes into the dust extractor or falls to the ground. With a regular orbital, the disc is rotating so fast that it propels dust off into the air at a higher velocity than the suction of the dust extractor. Dust in the air means dust on everything because it eventually falls and settles on everything.

As I did yesterday, I took the thick high spots down with a regular orbital, then used the Bohler to obtain a flatter surface, almost fair. Here and there I have some low spots and after cleaning off the hull (with water) to see and feel the hull without the dust I noticed I still have a few higher spots too, that could do with a touch more sanding, but I will do this with the torture board. 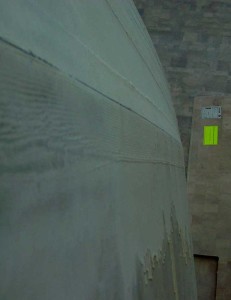 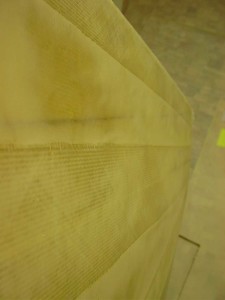 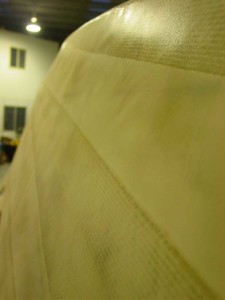 It sometimes appears from the size of the lip caused by the tapes under the bog, that I would need extra filler but because the bog flows over the tape and basically is the same thickness all over and when the thickness over the tape is removed the hull is getting close to fair. I have taken about a millimetre off the tape but only a tenth of a millimetre from the valley leading up to it which results in a smooth transition.

There are 2 ways of achieving a fair hull. One way is to fill the void between the tapes so as to end up with a completely flat surface from tape to tape (high to high). This would be the most accurate or aesthetically correct way to fair. The other method, (the one I prefer) is to fill for about 250mm from a tape edge and feather the bog out to remove the lips. This creates in theory a slightly concave panel between the tapes. However there is only one tape that is visible above the waterline on the outboard side of the hull (the bottom tape on the upturned hull which will end up about 300mm above the waterline) and the rest are below the waterline, and the inboard side of the hull is underneath the bridgedeck and also hardly visible (except at the bow and stern). The size of the gap between the visible tape and the next tape that ends up under the waterline is about 600mm at the centre of the hull, tapering to about 150mm at the bow and about 300mm at the stern. If you fill this area so as to be level tape to tape you add a lot of bog. But the gap is so large that it is impossible to see that there is a slight concave surface and as I said the bottom of the concave panel is below the waterline. One final note is that the gap between the tapes on the middle picture above will eventually be covered with antifoul paint, which is a thick uneven paint anyway. So there is much less need to be super fussy on these sections of the hull.

The different colours in the pictures above is because some were taken after dark under the lighting in the warehouse which effects the color balance. After I had finished sanding for the day I decided to wash the hull down so that I can get a better idea of how smooth the hull is without dust all over that gives the impression of smoothness. I can also see the highs and lows that need more sanding or filling (then more sanding!).

By 5.00 I was finished sanding for the day so I used the spare time to vacuum and generally clean up. The dust is not Jo’s favourite part of the job (in fact she hates it) so the less dust around the happier she will be tomorrow when she has to work in the warehouse. If you cannot stand dust or at least tolerate it for a while then you are going to find building a boat difficult.

Well it feels like I am about half way and I get to rest for a week (work feels like rest by comparison) and I should be able to get the other side of the hull done next weekend. At this point the sanding is as bad as I thought it would be. I don’t like it at all. It is harder work than I would like to be doing on a regular basis (or even every now and then!), luckily you only have to do sanding for about 5% of the time (my guess) on the whole build or about 200 hours including the interior. I wonder how I will feel once I have finished the hull, maybe I will think it wasn’t that bad after all, who knows? Having said that, it is very satisfying to have a smooth hull.