After the successful nose job last month I finally got my hips reduced. Turned out to be a bit bigger job than I had hoped, at least with the port hip, but now its done I am quite pleased.

And with the rear steps final shape created, the hips not only became more visible but their removal made more sense and all the more pleasing once it was done. That and finally getting the transition to the flat step top from curved side deck shaped in, it all has fallen into place exactly as I envisioned.

So first, perhaps a photo of a Schionning with the look I was hoping to achieve. I took this just a few weeks ago at the Gold Coast marine expo that I visited on my way home from picking the outboards up (thanks again Wazza). I mention it because my vision for the steps is many years old but often its easier to achieve something with a reference point such as proper plans or photos of the finished article than just ones imagination. Until I saw this boat I was winging it. (Its also very satisfying to see the finished article of something that until then only existed in your mind and comforting to see someone else has the same ideas.) What in particular this image showed me was how to transition from the highly curved hull to deck panel to the flat step side top, which in this example is almost identical to mine in both the curved area size and the flat area size.

But I couldnt really get that transition right until the hips were removed, because the heights all need to blend into each other. And in the interest of full disclosure, my eye for such detail is not so good so Terry shaped the last of the ever-decreasing curve section for me, after I had removed the hip bulge. There is still some shaping to do but its almost there. First task was to grind away all of the bog and glass to expose the strip planking. At this point the patch is about 500mm wide and about the same high in an oval shape. This is what I originally thought would be the extent of it. I was quite careful in removing the glass using a 180mm polisher grinder rather than my usual 100mm angle grinder. These larger machines are much heavier and require both hands rather than the single hand held angle grinders but because of the larger disc size, it is easier to maintain a fairer surface. The larger discs also dont rip into the work as well so as a result the going is much slower.

The glass is quite tough. But once I finally got some off I feared the core would rip away too easily. I need not have worried about it. First there is a 1mm layer of hoop pine veneer on the duracore strip planking and this too is surprisingly tough. The flat panels of the boat are duflex, the strip planking is duracore. Both are a balsa core made by the same company, the difference is duflex comes pre glassed, duracore does not, so it needs the pine veneer each side so it holds its form when curved whereas balsa on its own would be too fragile. But once the pine was also removed, the glue lines act as hard barriers slowing down the process of removing height from the panels. Without them the job would have been done much faster but the risk of grinding holes would have been much greater.

Besides my own eyes (which as previously mentioned, dont always see these unfair bulges, lets face it, if they did I wouldnt now need to grind them off again!) I have a long piece of aluminium inch square bar as a batten to show the unfairness level still to go.

Once I was down to balsa I had nothing to indicate depth. The bog (applied when I originally glassed the panel to save on peel ply and get a chemical bond) is about 1mm, the glass about 1mm and the pine another 1mm, so 3mm so far ground off. A check with both naked eye and batten revealed 2 things. First I still had a long way to go, and second because I still had a long way to go the patch needed to be much bigger. So to give myself a depth guide I cut saw cuts using a hand saw to about another 5mm over the highest area (especially visible with the straight edge which pivots on the high). Then, grinding until the saw cuts completely disappear informs me I have ground another 5mm. Without the saw cuts there is no way of knowing how deep I have gone, which of course is limited to the thickness of the panel, which in this case is about 20mm, the duracore panels are 18mm including the 1mm pine veneer, so 16mm of balsa.

It turned out, my port hip is about 20mm high. I kept grinding an ever deeper and ever larger patch until eventually the pine veneer of the inside skin started to appear. I could keep going resulting in a hole I would need to patch from the inside but decided I could fair the rest of the lump out by bogging the rest of the panel up to the high. This was always an option as I mentioned in my last post, the solution was likely a combination of grinding down and bogging up, but with the other skin only 3mm thick I figured it was enough. I will still need to patch the inside skin to add back some thickness, I figure I need at least another 5mm, easily enough if solid glass. The thin area is about a 200mm radius. Having said that, the panel does not “give” at the low/thin point. I cant feel any weakness by pushing on it, but for piece of mind, an inside patch, in the laundry section of the boat is an easy fix. From the image above you can see the patch is now about 1800mm wide 500mm high and you can just see the pine veneer starting to show right in the middle. At that point I have taken nearly 20mm off the height tapering out to nothing at the edges of the grind. When I re-glass then bog it I will be putting about 1.5mm back on. To completely fair the lump out I will probably be adding about 3mm of bog, maybe 5mm at most to the lows out for about another 2 meters maybe 3 meters at most and about 500mm top to bottom. 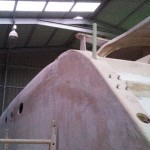 Once I had ground away as deep as I dared, I hit it with a long board to round the curve off and I re-glassed it using 600 gram cloth (the original glass is 457 gram). I peel plied it ready for bog next. As you can see from the pics above the bump is mostly gone. In order to ensure a good adhesion of glass to balsa and to fill any holes where hard glue had chipped out or any discrepancies or unfairness of balsa to pine heights I smeared a slurry of very runny filler over the ground area first then laid the pre-wet glass sheet over it and used a consolidating roller to press the glass down into it. Before glassing, Terry hit the high spots on the hull curve to step side transition with a plane (I had a 9mm ply top to round over and a plane was faster than a grinder) to round the shape for me and I bogged the lows spots to create close to the shape needed. A little more bogging for shape and fair will happen when the new glass is bogged. I think the pics speak for themselves. This wasnt cosmetic surgery it was corrective. And the starboard hip was much smaller requiring only about 10mm height removed and a re-glassed area of about 1 meter by 500mm. I am so pleased I decided to fix them rather than ignore them. All up, from first grind to removing the peel ply was about 10 hours, 6 on the port hull, 4 on starboard. I still have a bit more filler to add to fair the curve hollows out. Its hard to get the fill right in one go as each pull on the trowel disturbs fill I was already happy with. One other pleasing thing was the way the glass had adhered to the planking. Tough to get off meant a strong bond. No bubbles or voids where de-laminating could occur, just a uniform well adhered glass to substrate. I now assume the rest of the strip plank glassing to be of the same quality, which is reassuring, I base that on a fairly substantial sample size on both sides of the boat.

The thing that intrigues me now is the actual cause of the bumps. Of course raising the final bulkhead height is the primary contributor and caused the problem on both sides, albeit to varying degrees but ultimately it has to have something to do with the position of the next former, which was an mdf temporary bulkhead. I cant remember if it was at its plan designated height (which assumes a lower height for the final bulkhead) or if I adjusted its height to suit the now raised final bulkhead. And if I did I must have raised each side to slightly different heights which may account for the slightly less prominent starboard hump. I guess it doesnt really matter now. I just have the davit step top to glass on (which first requires me to fair the place where the U bolts go in including to high build stage because once the top is glassed on there is no way to get to the nuts on the U-bolts so they must go in before the tops are glassed because fairing later with the U-bolts in would be quite difficult) and the rest of the step sides once I have the shape right, and a few pads for the winches and deck fittings and the helm station to build and that’s it for construction. Its all bogging and sanding for a few months after that. I will probably punctuate fairing with some inside work like wiring in lights and switches etc, just to break the monotony. So so pleased with how she is starting to look. Its very pleasing to see a tangible manifestation of the images I have been seeing in my mind for so long.