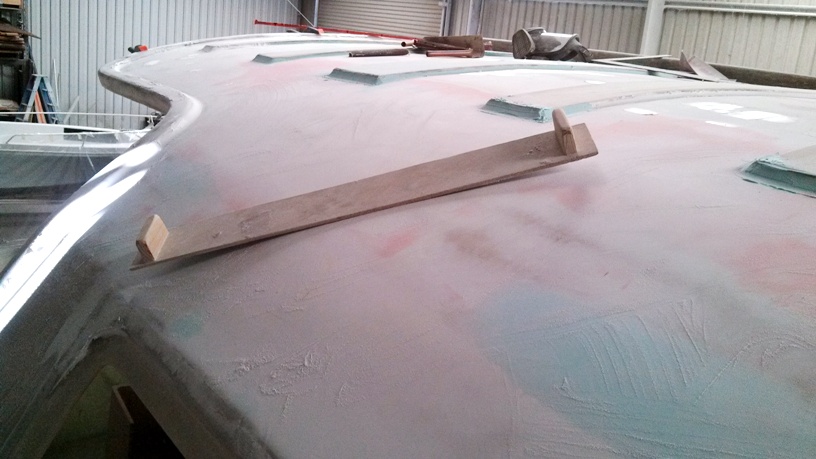 Not yet. Again I decided I was not ready to be happy with the roof so I filled spots, cove filled and re-sanded large areas. It is getting to be very close, but I wont know for sure until I get a coat of highbuild on, especially while it is still wet and take a good look at a glossy white roof. Gloss has a tendency to show you all of your shoddy work. 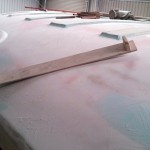 So I got out the flexible board and sanded some more, spot filled some more, sanded some more. Then just for the heck of it I sanded some more. The sides of the cabin roof where the sanding board is above, is still not as smooth around as I would like, there are still some “chines” I can feel (cant see them though, you can see that the bog is sanded through on them but not that they still have hard edges) but this area will be under non slip gritted paint so wont be so highly visible as it would be under a gloss smooth surface, so I think I can let these slide. 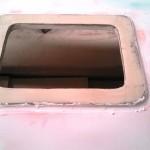 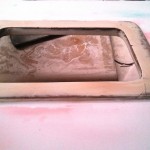 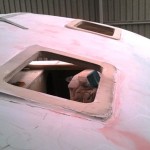 Then I sanded around each cove and window/hatch frame and solar panel pad. Re-coving in places before re-sanding it again. This also threw up some more imperfections that needed more work. Here is one that came up around one of the hatch frames. The first pic shows a corner cove that wasnt deep enough so that when sanded there is still a malformation of the shape. From a distance these things dont look so bad but up close they instantly cause the face to contort with that soy milk after taste face. There is no way you cannot fix these, with gloss paint on they would light up brighter than a hong kong christmas tree. I used bright blue bog to do a lot of the touch ups more so that they would be highly visible so I could find them to sand them again, white on white is sometimes hard to find. May have made the corner fix a bit too blue though, hopefully its color is hidden by the highbuild and not still visible through the topcoat white. 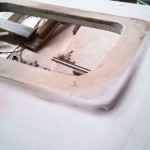 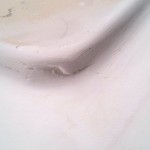 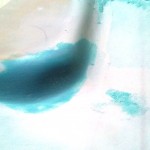 The coves along the solar panel pads I didnt get too fussy on so as a result they are not as consistent (same radius shape) along their entire length. I was very careful on the front edge of the front pad and the rear edge of the rear pad because these will be visible with the solar panels in place, all other coves will be hidden under the panels. I was also a little more careful for the first 200mm or so as the ends of each pad will also be visible. 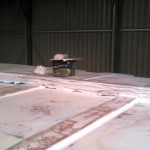 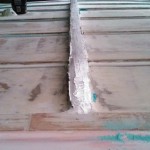 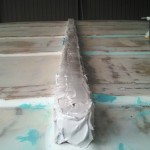 And then when I had it as close as I thought I would (I could get it better but I cant keep fairing this roof forever, I have the rest of the boat to do!) I then agonised over the beam running down the middle of the roof. Ironically, it will be one of the few still visible parts of the roof and incredibly I considered NOT fairing it. How did I ever think I would allow myself to get away with that? So I buttered it up with bog and sanded it down to a much fairer surface.

I also ran a batten around the rear edge of the roof and found it was not a nice curve either. I dont have a pic of the batten against the edge as I had no way to hold it there (each end is 2 meters apart) and take the pic and no way to hold the batten there on its own. But what it showed was the edge moving ever so slightly in and out so that the edge touched the batten along most of the length but dipped in here and there but mostly that the middle meter or so protruded a few millimetres further than it should and distorted the curve a little. So I buttered the edge up, shallower in the middle to remove that stick out to restore a more even curve. 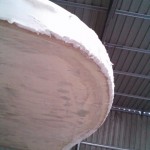 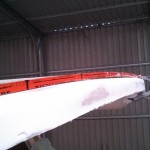 When sanded most of the bog on the edge comes off again but because you cant see where it is high or low with the naked eye (or how deep the hollow is) the only way is to bog the entire edge and sand it fair again. I marked the hollows when the batten was down and how deep they looked with batten in place (2mm or 3mm) but it was just easier to bog the entire edge to be sure. I also have a slight flat spot across the middle of the top of the roof edge. This I guess should not be surprising, the roof itself (as indicated by the shape of the bulkhead below) is flat across the top, so why would I think the edge should be a constant curve when the roof isnt nor meant to be?. So I wont bother trying to add height to the edge to make it curved as it is almost invisible without the batten anyway.

There are still a couple of areas around window edges I am not happy with but I will fix them later, once the roof is all white and I have a better idea of how much other work I still have to do on the roof. The areas I am concerned about are the ones where there is quite a build up of thickness leading to a window edge in the corner of the window but not so much of a build up (of thickness) further along the window toward the middle of it. The issue is one of consistent shape. Because of the build up the window recess now becomes deeper, by as much as 10mm in some areas but not so much deeper in the other areas, so how to shape it so the edge is a consistent shape despite the depth being deeper is my problem. If I gradually slope to near the correct depth the over deepness is less noticeable but the shape of the rounded edge changes as it transitions from middle of window to corner. If I keep the build up depth all the way to the edge of the window frame then just round it in the same way (same radius size) that the middle of the frame rounds from the roof to the pane the shape of the round (radius) changes as it nears the corner to a completely different radius at the corner, but this method shows the stark difference in pane depth.

I have also yet to properly fair the bottom of each pillar and under the windows where the sides meet the deck. I am really just concerned with the actual roof at this stage. Get that right and I will then finish the cabin sides, a relatively quick couple of days to a weeks work (at the pace I am going, probably only a days work for someone else) and it is then on to the decks.

I also still have to sand the beam and cove the edges of it. I again wont be too fussy about those coves because they too will be hidden by the solar panels as I plan to mount them hard up against the beam.

So other than that, I think this roof is fair enough. I am particularly pleased with the shape of the front corners, where the brows used to be. Even the way I have managed to keep the sharp line where the curve of the roof meets the flat of the pillar. Its such a small thing, but it reminds me that I rescued a mistake to make it look like it should have all along but in doing so I gained some internal volume but more importantly a feeling that I can fair, because after all, fairing is changing a wrong look to a right one and I think I am achieving that. 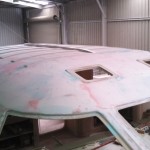 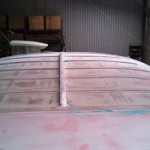 The next post will hopefully include some pics of a glossy white roof. Glossy because the highbuild will still be wet, and also if you apply highbuild thickly enough it does dry with a gloss sheen to it. Of course I will then need to sand it again, but the shiny surface will also inform me as to whether the roof is close enough to fine sand the highbuild and apply another coat of it and even finer sand that ready for top coat. In other words, the first coat will show me if I am fair enough. Fair enough?