For those unfamiliar with how a modern kit catamaran is built, ours is made from pre-fabricated panels called Duflex from a company called ATL composites which is balsa wood core fibreglassed both sides at manufacture in 2400x1200x16mm panels (the thickness varies with the requirement, bulkheads are 25mm) which then have computerised router cuts in them that form full boat length hull panels when the sheets are glued together along the 2400mm edges. The panels have “scarfes” of fibreglass that extend 11mm past the edge of the balsa on each edge so that when the 2 edges (1 on each sheet, 1 top 1 bottom of join) they form a “z joint”. The various hull or bulkhead panels are held in place in the sheets by 1 or 2 inch unroutered tabs which you cut out with a jigsaw once the sheets are glued together leaving you with correctly pre shaped panels that all fit together and have been computer designed. The benefit of this method is that computer cut means accuracy and also saving because the computer software also nests the panels so that the maximum useable parts are made from the minimum number of sheets. For example 10 sheets glued together gives 3 or 4 nested 12mt panels and some off cuts in between them that is surplus/waste, but there is very little waste.

One other and probably more important advantage of this system, besides being a much easier, faster and potentially cheaper method (due to labour and material savings) is that the correct mix of cloth to resin is achieved in the ATL factory resulting in a much lighter but stronger panel, and far less likely (if at all) to delaminate. Often past methods have involved a manual application of the inner and outer glass (called a lay up) to the core material used when the boat is made. If not done correctly the outer fibreglass layer comes away from the core, seriously weakening the skin and also likely to take on water and eventually rot the core (further weakening the structure) and if delamination occurs on both sides of the hull then it will eventually leak. So instead of a solid and strong 16mm hull you have a thin fibreglass layer, then an layer of core (balsa, foam, cedar, etc) then another thin layer of fibreglass but none are attached to each other in places, seriously compromising the strength and integrity of the structure. Nasty! With a factory made panel the resin is sucked deep into the pores of the balsa (I think it is formed in a vacuum) to ensure delamination is near impossible.

The glue is a 2 part resin (105) and hardener (206) epoxy (West System) and a powder is added to change the composition. Click here for pictures of glue being mixed. For structural gluing a powder called microfibre blend 403 is added that makes the glue bond better. A 2 step process is used, on one edge a mix of just the resin and hardener is brushed, and on the other edge the microfibre mixed resin/hardener is brushed then the 2 edges are butted together tightly and screwed down whilst they cure overnight (full curing takes over a week) but after 4 or 5 hours the glue is set strong enough to unscrew the sheets and cut out the panels). To make fairing (smoothing) compound or bog  a powder called microlight 410 is added to the same resin/hardener mix, this powder is a different color. A third powder called Microspheres 411 is added to make a filler for filleting edges, etc. but like the microfibre blend this is also white, so be careful which powder you use as a mistake is easy to make as you will read next!

I decided once I had made the strongback that I would have some tutoring from one of the Schionning crew (Jeff Schionning is the designer and his son Brett is a troubleshooting boatbuilder), so Brett came down and gave me a few pointers. I figured that the gluing of the sheets was a crucial element of the build integrity and a little insurance from an expert wouldn’t hurt and at worst I would pick up some time (and money) saving tips. Well it turned out saving me the entire cost of the boat (well the materials so far). I decided to have a practice making up some glue and read the West manual and it said to mix resin, hardener and microfibre, so I looked at the white powder bag and it said microspheres (at this stage I didn’t realise there are 2 different white powders!!) so I grabbed the sawdust looking powder without reading the bag (figuring the white one was not the one I needed so this must be the one) and mixed up some “glue” with it. I glued various bits of wood together and left them to cure. They glued together pretty well I thought. I showed them to Brett when he arrived, fairly pleased with myself and he told me I had “bogged” them together (with the Microlight 410). So here is another valuable tip, if you can get some expert advice, GET IT, it could save you thousands of $$$ or at least save you time, or read instructions and the contents of each item carefully.

The recommended method of gluing the sheets together is to place mdf or other timber strips under and over each join. Tape the strip with stickytape (packaging tape rollers make this task simple) to stop the glue that seeps from the join from sticking to the board. You then use the strips as clamps that pull the joint together and hold it there whilst the glue cures by screwing the 2 strips together through the panels. Brett suggested it is sufficient to only use the strip under each join as a flat surface along the entire join and just screw the sheets to the boards using 25mm screws (panel is 16mm, strip is 16mm so they wont go all the way through). The benefit of this is that you can see to place the screws in places outside of the actual hull panels to save filling the holes later and also with this method we screwed it all down first before unscrewing it again and gluing it so we were not under time pressure with glue going off and made sure it was all lined up correctly first. The panels have z-joints of fibreglass top and bottom. A good tip here is to mark each joint with 2 texta lines before unscrewing the panels for gluing, this will help to line up the panels once you glue and replace them. Once the panels are screwed down and marked you can remove every second panel (leaving every alternate panel screwed firmly in place) and apply the glue a few panels at a time, then replace them and the screws to hold it all in place and pull the joints together and remove the excess glue with a trowel or scraper. A tip to help speed this process is to use different colour head screws on the ones to be left in place and the ones to be removed to apply the glue, to help you not unscrew the wrong screws, I used bronze and zinc) but I found after doing a few sheets, I could easily see which panels to unscrew and no longer needed to use different colored heads.

The way to glue the panels is to mix up a batch of resin/hardener only (the mix is 5:1 resin to hardener but the pumps automatically apply 5:1 with one pump of each) in a takeaway food type plastic tub and apply it onto all the edges of the panels that we left screwed to the strongback, with a 1″ paint brush to one edge, and a mix of resin/hardener/microfibre blend is applied to the edges of the now loose unscrewed panels (the opposing edge of the joint), also with a 1″ brush (you can use the same brush). When mixing the resin/hardener you will notice that it is a bit milky at first and you mix until the milkiness disappears and the mixture is clear. This usually takes about 2 minutes of whisking. I find that on my own I can do a length (10 sheets) in a day, and the first thing I do the next time I work is to cut out the panels with a jigsaw and glue another length. I can generally do about 4 joins at a time before the glue starts to go off. So a tip here is to mix about 4 pumps of each of the resin/hardener and this will be enough for all 4 2400 edges, then I mix about another 3 pumps of resin/hardener and about a level 1/4 cup scoop of the microfibre blend powder but don’t put it all in at once because it is so light that you will lose a lot of it into the air as you try to fold it into the mixture and wet it before it does. Because it applies thicker this will be enough for 2 2400 edges (each side of the panel that will fit back into the void between the 2 edges of the panels stilled screwed to the strongback) which you can then put into place, screw down and squeegee out the excess back into your mixing pot before making another batch for the other one still waiting to be glued. Then move onto the rest of the sheets in this way. Another tip here is to wear gloves and a breathing mask (I am starting with the paper disposable ones but plan on getting a better mask). Many builders have grown allergic to the materials used and the allergy is cumulative so whilst you may feel nothing each time eventually it may start to affect you, so it is wise to wear the protective gear all the time.

Once you have finished one length (10 sheets is 12 metres) you can start the next length on top of the one you have just finished, it is screwed to the strong back so it wont move. You can use longer (50mm) screws for the sheets that will stay in place to attach it to the panel below to ensure it cant move but the downside is you may put a hole in a panel that will need filling later. One final tip on this matter, the sheets are designed to be glued together in one long sheet length which may be 24meters long, but because of space many cant do this (I just have 15meters), so where one set of hulls panels ends and another starts may be in the middle of a sheet. Where this happens you can end the strip there and start another length and glue the smaller pieces to the ends of each hull panel after they are removed from the last sheet but I think it is better to cut the parts out as one piece where possible and then glue the whole piece to the next sheet (as the first sheet of the next strip). This method ensures that each piece is glued on straight and it is all done in one go rather and a lot of smaller gluing jobs. 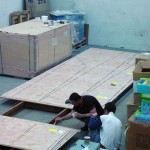 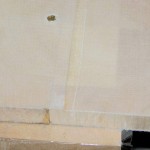 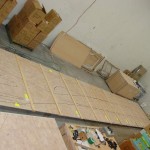 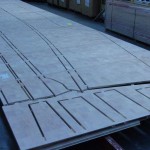 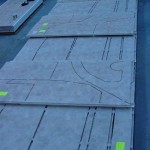 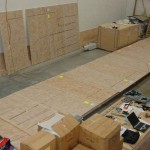