With the duckboard braced to level it and the rudder tie rod glassed on and curing, I could not work on the boat for fear of disturbing the level set of the conduit. If the conduit moves and sets unlevel then the tie rod may stick. I have received emails asking me if I am concerned the tie rod may stick when underway in a heavy sea due to flexing of the boat. I am a little. But when you take into account the massive rigidity that will be built into the duckboard when the hatch dividers back and top are glassed on, it will become like a massive box section girder. I will also be glassing on another conduit so there will be the bulkhead, 2 conduits and then the duckboard vertical panel (the back) so that is a massive amount of stiffness built into the boat. I doubt it could flex enough to bind the tie rod. I tried bending the conduit with the tie rod in it and moving the tie rod through it and it still moved freely. The only other option for a tie rod that could not bind due to flexing would be underslung under the duckboard. The tie rod would need to be much heavier to avoid bending under rudder load and would look a bit ugly but it could be done fairly easily. So if I ever have any trouble I can change it but I doubt I will.

The tie rod only protrudes from each side about 150mm and to it will be attached with 2 12mm bolts one vertical one horizontal, a stainless steel connection bar shaped like a Z. The top and bottom parts will be 25mm rod and the connecting section 50mm x 10mm strap. The 25mm rod at the top will be welded on and go inside the tie rod and be bolted, the rod at the bottom will be attached via another bolt as a hinge point and have a thread tapped and a turnbuckle attached and to the other end the mini tiller is attached which is in turn directly attached (welded) to the rudder stock. 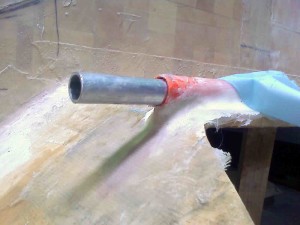 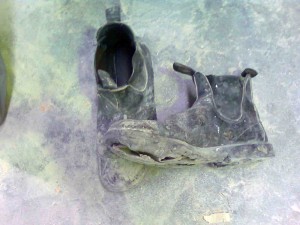 So today I glassed the inside of the steps. This section is kerfed. I have pre glued one of the steps so the inside kerfs needed to be sanded before glassing. The other step I glued and kerfed wet on wet. Let me tell you, anywhere you can glue and glass wet on wet, do so. It beats the hell out of sanding. The right angle joins also required coving. So as to cover the cove tapes and the kerfs I decided on 250mm tapes overlapping in the middle of each step riser. I had briefly thought about glassing in one piece but decided against it for 2 reasons. The pre glassed duflex of the treads does not need another layer of glass, and it is difficult enough taping around curved corners without adding in the complexity of multiples. Don’t get me started on how frustrating getting peelply on around curved corners is. You need to have a lot of patience and slow hardener. At times I wondered what was worse trying to get the air bubbles out of the peelply or sanding them later if I gave up on the peel ply. I almost did! 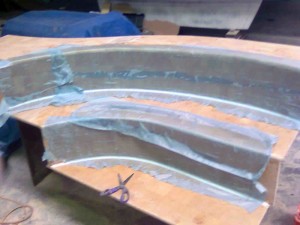 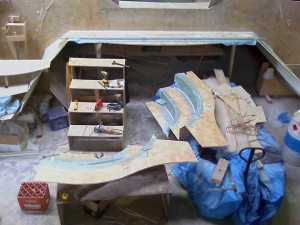 Once the rear steps are cured, the next step is to fair them on the outside. The inside will be finished in a coat or 2 of white epoxy, but I have a fair bit of work to do before I get to that. I still have to cut a lid for the engine room out of the steps, and before I do that I want them faired on the outside. The method for cutting the engine lids out will be to decide on where I want them cut, then route 2 channels separated by 1mm of balsa and fill them with fibreglass rope, it does not need to be uni, although I will probably use uni then re-glass the top of the groove and fair it. Then once fair I cut along the 1mm balsa between the 2 uni rope slots leaving both sides of the cut, the lid and the steps pre edged. Then to the underside of the steps, a plywood frame is glues and glassed so as to act as a stop for the lid into the steps and to that once painted I could also fit a rubber seal to keep water out, although this is not critical as the motor well is a wet area anyway, that is there will always be water inside it so keeping water out wont be a major issue.

I had a small ceremony for the final pronouncement of death of my Blundstone boots. I have had them for about 15 years so it was sad to finally kill them but the sole (or is that soul) of the right boot was near totally off. So into the bin they went. I had hoped they would see the build out but alas it wasn’t to be.

I wont get much done this week due to another Melbourne trip, but hopefully I can get a lot done over Easter. I am keen to get this section of the build finished, for 2 reasons, the first is I seem to have been working on these steps forever and am looking forward to the change in appearance the boat will have once they are on, and second because I am keen to get inside the boat and start on the wiring and plumbing before tackling the furniture. And along the way I also have to make and fit the rudders and rudder boxes.