Glassing inside of planking

After getting the sanding of the inside of the panel done yesterday, today I filled the remaining gaps in the panels that I had not already filled. I decided not to bother filling the plank gaps from the inside of the boat as I originally glued them as I felt I could better achieve it with gravity on my side when the panel was off the boat and then glass onto the fill wet on wet. I found that sanding the pre glued sections was actually easier than sanding the non filled sections and that filling and then wetting out as I went was a lot harder than I thought. I used a roller to spread the resin and I cooked 2 rollers in the process as the resin went off in the roller while I was filling the next section. Usually you would use the Kinetics resin which had a longer gel time but I am running out of that so I used West which sets faster. It was easy to spread resin with a roller but I only had 2 so when the second one started smoking before I finished (I was about 2/3 of the way along) I had to use the squeegee to spread the rest of the resin around. 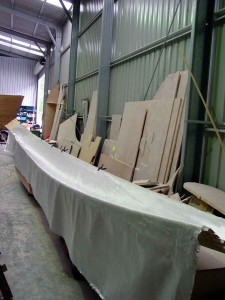 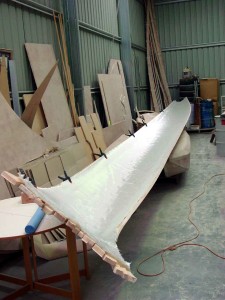 So the procedure was to lay the glass out on the panel, trim it to size and roll it up again, then I start to fill a 2 meter section at a time, filling the gaps with thick glue. Then I rolled out the first 2 meters of glass and wet it out. Then filled the next 2 meters, then wet out the glass onto the glue wet on wet and so on until I had done the whole panel. At about half way I used the squeegee to squeeze out excess resin and the roller tool (I forget what its called) to press out any kinks or air bubbles. And so it went until I had the entire panel glassed. It was hotter today than I thought. It was raining but humid so it didn’t feel hot until I started working. Then it felt hot and the resin set fast, especially the wool rollers!

Once I had the panel glassed it was time to put the panel back on the boat to set. The reason for doing this is that if you don’t the panel can set out of shape and later when you want to fit it to the boat it will not fit and mean using more force to pull it down and possibly break the glass or using more bog to fill any unfairness, but I guess most importantly because it is harder work! You can see from the last picture that just being off the boat 2 days and only glassed on one side the panel had changed shape slightly and a 40mm gap would have been the result. While the glass was only set on the outside the panel was easy to pull down to the bulkheads (imagine if it set the other way, too small to fit back on!) and when the inside glass sets it pulls or pushes against the glass on the outside and sets to a rigid shape that will hold its shape off the boat for as long as I need it off.

Putting the panel back on the boat was a lot harder than I thought it would be. There were only 2 of us and we just could not lift it back on without a third person, so I had to run next door and get a helper. With a third person we were able to lift the panel back on. It is not that it is so heavy because it isn’t overly heavy it is just so long and awkward. I was relieved to have the panel back on, I then replaced the holding screws on top and bottom of each bulkhead to pull the panel back to the correct shape.

After the panel is set I need the temp bulkheads for the other side and I need the panel off the boat for fitting the dagger case and also some more internal glassing on the bulkheads. I can then replace the panel and glue and glass it on.

So on the weekend I can start to set out the temp bulkheads on the other hull and perhaps start on the planking on that hull.