Last weekend I made the panel that would become the bathroom sidewall and ceiling and the back of the kitchen cabinets that will run from the main bulkhead to the stairwell/bathroom front wall and doorway. It is made up of 2 pieces of plywood and a quarter of a pvc drain pipe to form the curve, instead of trying to kerf a panel or settle for a square corner this ended up being a very efficient way to make the curve. Next step was to get the now single curved panel into the boat and fitted. In the end it was somewhat easier than I thought it was going to be. I had made it a little tight so I ground it down but left it sufficiently tight enough that it needed to be cajoled into place with a hammer and then once in place stayed there for me to glass it. 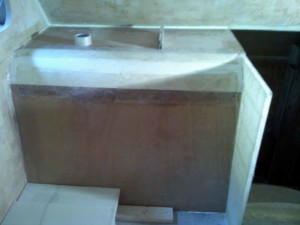 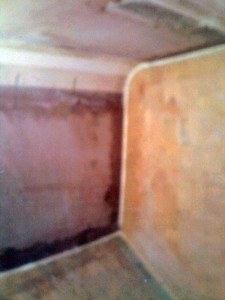 I had a particularly difficult compromise to resolve with the placement of the curved panel. I have 3 competing space issues. Firstly the deeper I make the cabinets the more space on the bridgedeck I use up and the tighter the room and walkway into the hulls becomes. That’s issue one. Then down in the bathroom, we have decided on placing the port hull escape hatch on the chamfer panel in the bathroom but so as not to impinge on the space the escape hatch needs to be safe and functional (uncluttered exit area, there is no point having an escape hatch if you cannot escape through it) the back wall of the cabinets cannot extend past the chamfer to bridgedeck join, which has been possible in many of the other cabinets that extend from the bridgedeck over the chamfer panels and into the hulls. So that’s issue two. Then finally I needed at least 400mm depth in the cupboard so as to have a functional cutlery drawer. The cutlery draw is at the top of the cupboard and the curved back helps in this regard but what also helped was to angle the panel from the chamfer edge slightly into the bathroom space so that the cupboard was deeper at the top than the bottom. That got me to 450mm which is enough for a really good cutlery draw. The cupboard depth at the kickboard is only 400mm so the angle over the 900mm height is very slight.

Then another problem surfaced. The brand of convection oven we want is 480mm deep. We dont really want it protruding 50mm from the cabinet. So I am going to have to cut a square window into the back so that it protrudes into the bathroom 40mm (10mm is the width of the ply) and figure out how to hide it late. We will have a mirror over it and I am confident I can get around this one. The LG model we want has a fold down door (hinged at the bottom rather than a swing door that most microwaves have) so that it feels more like a traditional wall oven and it is a great compromise size, we like the 42 litre Panasonic but we just dont have the space for it and the normal 25 litre or smaller (we have a 17 litre at home but we never actually cook in it. The model we like is 34 litres. Big enough to roast a chicken in. Another thing we (well I,) like about it is that it has a number of heat elements of varying power, a top element for grilling, a fan forced bottom element and also a halogen lamp as well as the microwave function. The maximum ongoing draw is 2100 watts (at 240v) so in conjunction with a small generator and a decent inverter we could use it at full power for the hour or so a roast would take. I am told that they roast much faster than conventional ovens so 90 minute roast would take less than an hour.

Another issue is that the model comes in either on top of bench or under-bench variant, but the under-bench model has a trim kit that adds 50mm to the width which we just dont have, and the trim kit has venting which keeps the unit cool. My solution to this problem will be a bilge blower that I will wire in so that it extracts the heated air from around it and deposits it in the cockpit outside the boat. I will also line the inside of the cabinet with insulation foil. This will keep it cool and safe.

The space available in height of an under bench is 750mm (the top is set at 900mm, and 150mm is kickboard and bottom shelf) and I need 400mm for the microwave, that leaves 200mm for the pot drawer below the oven, not very deep but we probably wont have too many pots to store, maybe a frying pan and a couple of pots and 150mm for the cutlery draw of which about 100mm is drawer and 50mm above it void that the front rail uses and the drawer front abuts. So with these measurements settled and the back in the rest of the construction can take place. I have run out of polycore for now, having used the last of it I had on the 2 shelves in the other part of this cabinet against the bulkhead that will go in after I finish this end section. (I will need about 4 more panels to complete construction and will get them next year) so I am building the rest of this cupboard out of ply and another quarter of pvc drain pipe as the corner. 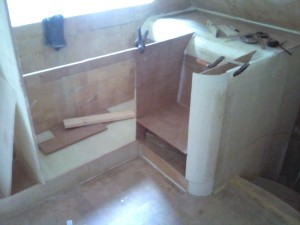 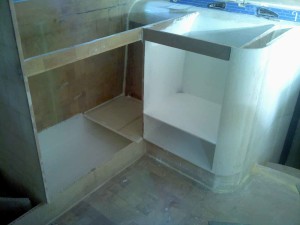 Last week I cut the parts to size and had them dry fitted, so this week I glassed them in. This was a quite simple task. I had worried about how I would glass an 8mm pvc pipe wall to a 19mm polycore panel. I had considered de-coring and inserting the edge or gluing additional thickness to the inside to bring it up to 19mm for a butt join but in the end, it was easy just to make a filler cove and glass the inside of the join keeping it flush on the outside (and in place with clamps until it set) and then giving it a grind to make the outside smooth and glassing it. Epoxy and glass sticks to the pvc with mechanical grip when you key it. First I did the kickboard curve, coved and glassed each side, then when set I glassed the kickboard front on. Then on went the ply bottom shelf, shaped to the curved corner and having it in place first provided a platform for the bottom of the curved pvc pipe to sit on. I clamped it at the top to hold it tight edge against edge, ran a cove of filler and applied a pre-wet glass and let it set. Then I filled what little gap was left at the outside edge and when set sanded it and glassed the outside of the join. Then the middle shelf, which is the shelf the microwave will sit on went in and the top rail. I had considered fitting the pot drawer before the microwave shelf but there is plenty to room to get in there to do it later. So to finish it all off I gave it all a coat of white epoxy. Ply should always be sealed on all edges and faces to ensure it cannot swell or rot.