Get ya bearings right

Poured bearings are easy to do, so easy I got mine done on just my second attempt, well third if you include the practice one I did.

Terry’s method of aligning the bearings on the shaft before pouring both, worked very well on 3 of the 4 bearings. We had the incredible situation where the one bearing that was perfectly formed and needed no sanding at all to rotate freely on the plastic bearing was also slightly out of alignment so although it worked at single bearing level, it needed some sanding to re-align it to work with both bearings inside the rudder tube. The process we went through was to first get each bearing rotating freely on just its bearing, then to get both bearings to work together.

The uhmwpe bearings still needed to be tapped off with a mallet to initially free them, but initially 1 out of the 4 worked perfectly with no further action, 1 of the 4 required just the lightest of sanding to free it up and 2 needed just a little more sanding to free them up for full rotation with minimal binding and tightness, but more importantly, the rudder shaft now push up into each bearing inside the glass rudder tube, albeit with a little force at first until we sanded the various highs out and got them to the stage that the rudder could be inserted and removed by hand. So with those tubes glassed into the boat the rudder shaft will push up into the bearings and function properly when connected to the tillers and hydraulic rams and be able to be removed again easily. 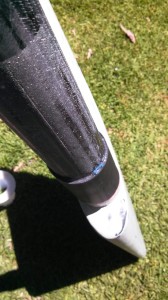 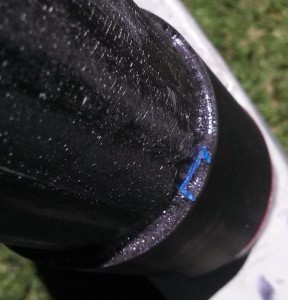 The reason sanding was required is the uhmwpe bearings were ever so slightly not perfectly circular. It appears, from the points where the bearings are binding, that the manufacturer used a 3 pronged lathe chuck to grip the uhmwpe rod when turning out the shaft hole that may have ever so slightly deformed the bearing walls at these points because there appears to be 3 high points (and 3 low points that cause the high points in the poured bearing and when they meet the opposite high point in the plastic bearing you get a tightening and then loose again when in the trough again) that seem to correspond with where the lathe teeth would be. Bear in mind we are talking about the high points being 2/10s of a mm so we only need to remove 1/10 of a millimetre from each side of the poured bearing for the high point to be removed. But in order to find exactly where the highs and lows are Terry suggested an interesting method. Toothpaste. It is slightly abrasive whilst at the same time lubricating and visible all at the same time. Another friend has suggested that for slightly tight bearings I should use valve paste also known as lapping paste, used to free valves in valve seats in motors. However, the issue might be that I may not be able to fully clear the paste once the bearing is sufficiently freed, and the abrasive paste will continue to abrade until the fitting is too loose. So we used an extremely light sand using very light paper, which takes a little longer, but the alternative is that you go past the point you should and end up with loose fittings. Best to be patient and do it very gradually. 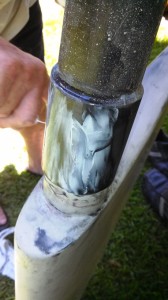 After the toothpaste is smeared on the poured bearing and the reinserted in the plastic bearing, a few twists later and then removed again and the high spots on the poured bearing are revealed as shiny spots, being where the bearing faces are in strong contact with each other and the lows, not being in strong contact stay dull or have the sanding marks still visible meaning they have not contacted at all and that the highs are keeping the lows from touching. Where the highs touch, the surface smooths from rotation erasing the sand marks and shining the surface. It acts like a guide coat revealing the points of contact. Each time we remove the bearing and spot the highs we hit them with 240 grit fine paper for just a few rubs and then went through the process again. Each time we did this the shiny areas get smaller and smaller until eventually they disappear and the bearing is free through a full rotation. Not that it has to fully rotate, it will only ever work through 70 degrees (35 degrees either side of centre). Once the high spots are gone the contact of each surface becomes full, 360 degree and freely rotates. Ironic, as the full surface area contact would offer more friction, however, even the slightest binding of high spots is felt in the rotation in your hand.

Having said that, my hydraulic rams can push up to 1000kgs of force. So even a very tight bearing will still rotate on my boat with no trouble at all. In fact, we stopped sanding whilst there was still just a hint of tightness so that if anything when they loosen up through wear they will still be a nice fit.

Once we had the uhmwpe bearings rotating freely on its poured bearing mate, the moment of truth. Were the bearings in line? A straight edge suggested they were but the true test is the fibreglass rudder tube.

And they work. The second one is still a little tight, we think because the rudder tube is a little tight and might be deforming the uhmwpe bearing ever so slightly. It turns out it is the uhmwpe, the bottom bearing on the second (which will turn out to be the port, for no other reason than we had to mark one from another and called one rudder and its bearings and tube port and the other starboard, it does not mean they have to go into that side of the boat, but most likely will) is slightly larger than the other 3 bearings. We measured and it was 2/10’s of a mm larger than the other 3. So by reaming out the tube we got the bearing to fit easily into the tube and took a little off the top bearing and we freed it up to the point I could easily fit the rudder in and out and rotate the rudder tube on the shaft by hand.

That’s the minimum test, that the rudders rotates inside the bearings inside the rudder tubes with just hand holding the tube, if I can rotate it in this manner, the hydraulics will have no trouble in the boat. (On 9lives the other cat built in my shed, the rudders were so tight we needed to jack the rudders up into the bearings using a car jack, and it steered just fine with a lesser steering system than mine). With that done we trimmed the rudder shaft to length so that there was a millimetre clearance at the top when the mini tiller touched the uhmwpe flange. Then we drilled out the timber dowel and I will fill this with epoxy, this will seal the shaft from moisture. We were going to drill the hole in the shaft to attach to the tiller but decided to wait until the rudders are hung in the boat and pushed up as high as they will go once all glassed in. Yay! Another tick off the list. Soon they will be hung in the boat and connected to the hydraulics and steering wheel. So next job is to glass the tubes into the boat.