Get on with it 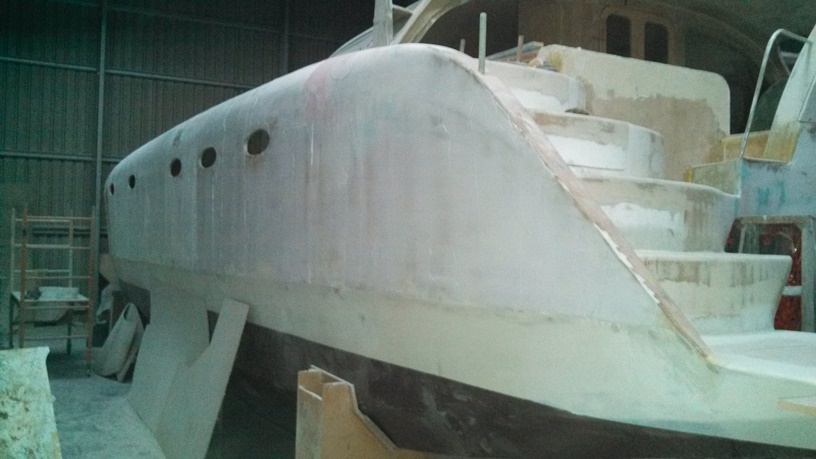 Last month, Terry’s cat moved to my shed to be sprayed. The under bridgedeck and inside hulls were done first, then late last week the hull sides were sprayed. Before that, another couple of coats of high build and guide coat were sprayed on and sanded off again. The results speak for themselves. Good fairers/painters are not cheap but their results are stunning. 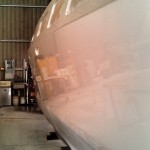 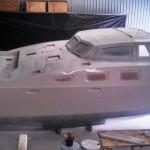 I get a lot of time to think in my stunningly boring job. The hulls were sprayed last Thursday so all through my shift that afternoon I swung between jealousy and determination.  It is hard to be a slow worker and watch now as 2 catamarans have been sprayed in the shed along side my snails pace build. I guess it is human to wish it were my boat finally being painted. And looking like Terry’s (and Dennis’s Nine Lives before this) and to feeling a little sorry for myself.

I snap out of such doldrums very fast though (ashamed of my self pity). Lets face it, there are people out there, some may even read this blog, about to stand their first bulkheads. I bet they wish they were as far along and as close to finished as I am. (and to further shame me, there are people on boats as we speak fleeing repression and war and about to be treated as criminals by governments like ours and locked up in detention centres for years as their prize).

Less than 6 months ago Terry’s boat was at about the stage (externally) that I am at. I know, because I helped him first glass the hull sides less than a year ago and we bogged the glass wet on wet, then helped him fairing earlier this year. So it is easy to see how far or how little I have to do to be where Terry is now. So get on with it right?

So instead of wallowing any longer (one evening!), I decided the sooner I bog the hull sides the sooner it will at least start to look like it is getting near to paint ready and the sooner I will feel like I am making that progress toward finally painting my boat. I had been shaping the hull to step transitions for weeks and it seemed little or no progress was being made. Truth is at a millimeter or 2 per couple of days its no wonder it took a while to finally achieve the final shape. (I still have some sanding to remove a little more hip from the port side but other than that no more filling other than further along the hull is needed on the rear step transition, which is what I am working on now and it is already making the hip look smaller).

My thinking is that I have about another 6 weeks of wintry cold left before spring heat starts making vertical fairing a living hell. At least if I have the hull sides (and the curved deck sides) done, the next step is the decks, then the cockpit and rear steps which are mostly horizontal or the verticals are small hand board size not long torture board size and I can at least keep the fairing progress over summer. 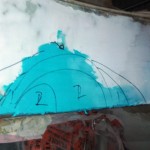 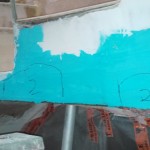 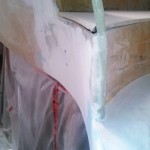 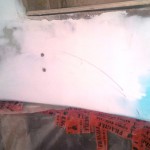 So back a couple of weeks as I worked on the hull to step transitions and the aft panel under the davits (the curve from the steps to the back). I needed to finish the back panel fairing so that I can glass down the davit step top, as this is the only section of the entire build now that is not sheathed by glass and bog as I have also glassed the step side ply with 200 gram plain weave cloth (OK I still have to resin coat and paint the front door).  I have the section faired now but it took a few screeds. I just need to run some highbuild over it to finish the job before I can finally bolt the rear anchor points in and glass the lid down.

As is getting quite normal for me and fairing or at least shaping because of my poor lack of vision for such things, it took a few more bog runs to finally get the hollows out of the hull to step curve right. In fact on the port side I now have a little too much bog on but that is now a matter of sanding it down again (the hard work part). I still have a slight hip on the port side, you might recall I stopped grinding the hips out knowing there was still a little of the hump to go, but that will lessen with the bogging of the hull to deck turn with a little more height added from the forward edge of the hip to the spring line cleat amidships. Even as I added the initial screed to the hull sides the hips started to lessen. 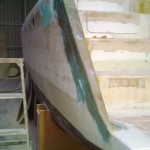 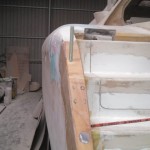 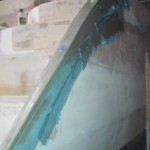 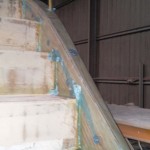 In glassing the step sides and top I glassed straight over the cleat bolt holes and fishing rod holder hole. I will remove the glass over the holes just before I bog (so that I dont lose the holes, I did not re drill the rear anchor U bolt holes and only found them because one hole site luckily remained visible so I could remeasure for the other 3, had I bogged over that hole too it would have been guesswork finding them remembering that I have to re-drill the holes in the centre of the oversize glued holes, miss them and I no longer have the core protection in place. There was no point continuing with the shaping before this glass was on because it added a millimeter to the height that would need to be faired back in, and that millimeter added height behind the lumps which helped me fair the lumps out again. 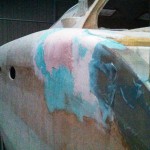 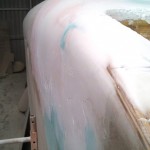 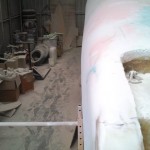 I am pleased with the transitions, the curves are as natural as I think I can make them and except for the port hip the shapes are about right. I still have more fairing to go but that includes the hull side fairing that is about to start.

I started today applying a thin layer of bog to the hull side panels. These panels are fairly flat already, so the bog screed is thin, to fill the weave and cover the joins of each panel to the next. There is also a slight curve to the hull fore to aft but little if any top to bottom, just the tapes (2 layers) joining the hull sides to the curved hull to deck panel. I have already faired to just above the chine including to high build stage, but in order to fair the sides I have to re-bog to the chine and sand back down, in effect re-fairing that 300mm section. 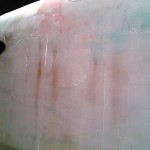 To get the bog on I troweled a much thinner bog layer roughly onto the hull side to get it on as fast as possible, even in winter the bog goes off in the pot if you dont get it within 20 minutes or so. After its on, I pull a tight screed with a metal straight edge, like a trowel without the handle. The runnier bog pulls quite well, but if its too thick it gets more difficult to pull cleanly and referring back to the haste in getting it from pot to panel, the longer it goes from mix the harder it gets to pull. What starts to happen on both thicker mixes but more specifically on half hour old mixes is that the pulled bog gets a leathery grain to it, which will make sanding more difficult. In fact, dont bother trying to re-do or touch up bog over 20 minutes old. It makes more of a mess than you started with. Better just to leave it to set then fill any hollows, holes etc later. The screeding process also results in ridges caused by the edge of the tool, even if you could run a meter wide tool you would still get the ridges, but they will just sand out later. Its a process that will end up taking a few runs over with bog before it is fair enough to high build. Also being a thin coat there are high points where there is little or no bog that shows through as the duflex color below, also quite normal, it wont look like a single white color until the highbuild goes on, and even then will be sanded through again, right up until the final sand of guide coat before top coat goes on.

But even with just a thin layer of bog on the sides, being whitish now, already are starting to look fairer. The bog is not uniform in depth, some places it is barely visible, other places as deep as 2mm (of which most will be sanded back off again) but on average and on most of the flat hull sides) the depth is 1mm. I have also faired in the raised cleat platforms and am pleased with how it all blends in, even before the long board sanding starts. The port side, having the hip is the harder of the 2 sides to fair, so I decided better to do the difficult side first.

And so glad I got a start on the fairing. As readers would know, I dread fairing. Even though the roof is now done, and it was the biggest of all repair jobs and although time consuming, it worked out well, I still dread the hours and hours of work still to be done. But I fear having to sand the hulls in summer even more, so I am glad I have got the job started. I am now a big step closer to finishing, if not physically certainly psychologically.

I still have 6 ply pads to glass on, but they can go on after the decks are faired, that will make fairing them (the decks) easier without the obstructions getting in the way of long board strokes. As far as construction goes, there is only the steering station and finishing the radome stand to go (it is mostly already made, just not glassed yet) and then just a small section on the underside of the cockpit cabin roof that is awaiting me running all the cables through before closing that up and fairing that strip in.

Getting there folks, getting there. Dont be afraid to let me know what you think of how it is looking.

3 thoughts on “Get on with it”