I glued the ply web parts together yesterday so that today I could glue the web into the beam. I simply applied some glued to the plates and screwed it back together to set overnight. It took less than 15 minutes to mix the glue and screw the plates back on. Today I removed the screws and then placed the now one piece web into the beam. I marked the correct position and screwed it into place. I marked each side of the web so that I could see where I would need to place glue. I then removed the screws again and piped (remember the piping bag method I used on the hulls) glue along the lines ready for the web. I placed the web over the glue and screwed it into place. I then smeared the excess along with my finger, filling any voids and creating a small cove either side of the web. 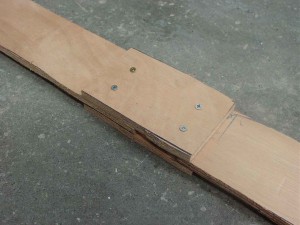 Once the web is set it will be coved and glassed in but before I do that I will plank the top half of the beam. To do that I have mdf molds that sit in the bottom half of the beam either side of the web, but in order for the molds to sit in place I will have to make the top half before I cove and glass (or else I have to take a piece out of every mold so they sit over the cove). I have glued the planks with scarf joins ready to plank tomorrow.

I will be gluing the top half of the beam onto the bottom half by gluing the first plank to the edge of the bottom front plank, this will save me having to fill the shape in at the front in the void that would be left if I start planking from the corner edge the way the back will join. I will then round off the sharp front edge with a router before glassing the beam. At the back edge I will be gluing in a 1/2 inch (12mm) electrical conduit. It fits perfectly as does the planking, the back plank finishes corner to corner if I start the front one flush along the face of the front bottom plank. I couldn’t have planned it better! The electrical conduit is for the trampoline to attach to and fills the void perfectly. After I have glued it in I will fill and sand it smooth ready for glassing.