Today it was a 40 degree C (about 104 F) day. Regular readers will know that on really hot days my work rate halves. And I also cant sustain a long work day. To compound matters Jo and I woke early and went for a walk along a local beach and I forgot to wear a hat and I think I got a little sunstroke. Anyway I managed to get the temp molds in place and planked the top of the beam. I had also intended to glue the planks together so that I was ready to glass it inside next but the heat was too much for me to continue.

I also trimmed the ply web so that it is the width of a cedar strip (12mm) shorter than the temp molds so that after I glue a stringer of cedar to the web the top face of it will be at the height that I have planked to. The purpose of the cedar stringer is to increase the surface area that the top can be glued to. The top will be glued to the stringer on the web and at the front and back. In the trimming I also cleaned it up so that it is a lot more even than it was so that the stringer will have a better surface to adhere to.

Once I had the ply web trimmed I attached the temp molds to the beam. I simply used sticky tape. This held them in place while I screwed the planks to them and also ensures that the top beam can’t stick to the temps when I glue it. Then I can easily remove it, turn it over and glass it inside in the same way that I did with the bottom of the beam. I can sit it in the jig to do that but I will have to rearrange the legs. I may just sit it on the drums. 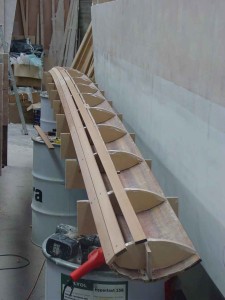 As I mentioned yesterday, I started the planking with the forward edge of the first plank flush with the front face of the first plank on the bottom half so that they glue to each other and the front edge of the beam will be the rounded edge of this first top plank. I will round it with a router. I then planked the next 2 planks in the normal way. So that the planking ends in the exact position I need it to so that the gap that is left is the correct size to glue the conduit into I planked the last plank next and then worked back towards the middle, spacing the planks as I went to ensure even spacing between them. These planks were not as tight up to each other as they were in the bottom half of the beam but it wont matter. Glue will fill the gaps and then the glass on both sides will complete the structure and such gaps wont matter, in fact some builders use icy pole sticks to deliberately keep the planks apart so that glue can properly penetrate the joins.

The beam is now the shape and size it will be when complete. It is satisfying to build another part of the boat and have it looking like it should and like all the other beams out there on Schionning cats. This was my first attempt at strip planking and it has worked fairly well and it was another of my fears before starting. I am sure most first time builders reading will be a bit daunted by strip planking so it was nice to pass another hurdle.

As I didn’t glue the planks today I may get a chance to do that tomorrow. This is a relatively quick job, maybe an hour. Then once it is glued it is time to glass the inside.