Happy New Year to all. Now that the hulls are completed, I can now look forward to new things to do on the boat. This makes the work more challenging and more fun as new tasks mean having to think about how things are done as opposed to the fairly tedious nature of making the second hull. As I wont be joining the hulls for a while, this month I will start to fabricate parts of the boat that I would otherwise have done later, such as the forward beam, the daggers and cases and the rudders and rudder boxes. I am sure the forebeam and the daggers will keep me busy all of January.

The forebeam is strip planked. It is shaped like a wing with a blunter rounded leading edge and sharper trailing edge and is curved so that it is higher in the middle by about 200mm. It is made by strip planking into (or over) either a male or female temporary mold but the kit provides female bottom half and male top half mdf molds which makes life a lot easier. In the past the plans provided the profile of the beam on paper and you had to cut the molds yourself from them. The molds are now cut with a cnc router the same way that the duflex panels are cut.

The only requirement for me is to make legs so that the curve of the beam is accommodated by the different height of the legs. The plans tell you the heights and spacing of the molds. The first step is to mark a line at the same place on each mold so that you can run a stringline to line them up. Then make the legs at the correct heights and attach them to your table so they are solidly in place. I used two 3 meter timber planks (the same ones I used to stand on when making the hulls) joined in the centre by screwing a plate of mdf to them. Then it is a matter of attaching the legs with the molds attached in the correct positions and making sure they are plumb, square and straight with a level, square and stringline, just as I did with the bulkheads. There are 4 planes that need to be adjusted. Everything is screwed in place so it can be moved if needed.

Once the bottom half of the beam is made (glued and glassed) using the female mold, the male molds are used to create the other half and they are glued to each other (with a web frame inside for added strength) and glassed shut to form the finished beam.

The cedar planks need to be scarf joined so they are long enough to make the beam. I need a 6.2 meter beam and the planks are between 3 and 4 meters. A scarf joint is a stronger joint than a standard end to end butt joint because the surface area of glue is much larger and also spreads the breaking strain along the plank more effectively making for a much stronger bond. The longer the scarf the stronger the join. I can easily cut 50mm scarfes using my circular drop saw but the plans call for a 10:1 scarf, and the planks are 10mm thick so the scarf should be 100mm. I can cut 100mm scarfes but they must be cut one at a time rather than both planks together which is more accurate as the cuts are made at the same time at the same angle. I did manage to make 5 fairly good 100mm scarfes (if the cuts are not at exactly the same angle the 2 halves wont meet correctly) and made 3 50-60mm scarfes for the other 3 planks for this half. (there are 8 planks in each half, I will make the other 8 after I have glassed this half)

As our beam wont be subjected to the same forces that a standard rig has I am not too concerned about having some of the scarfes at 50-60mm and when I plank the beam I will stagger the joins and alternate the planks with the shorter scarfes to ensure there are no weak spots. In the end the planks are again just a core for the glassing that will take place over them so I shouldn’t have any concerns with them. 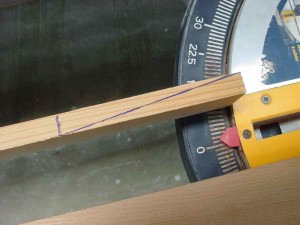 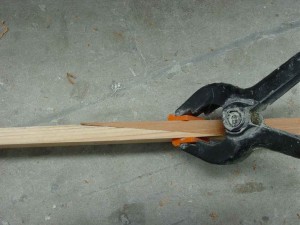 Once I had cut all of the scarfes for this half I glued and clamped them together. I used offcuts to spread the pressure of the clamps along the joins. 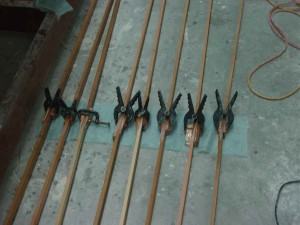 Tomorrow I will re check and re adjust the legs and molds, clean up the glue on the planks and start planking. I will dry fit them first, and screw them into place, number them, remove them and re-attach them with glue. You can also fit them with spacers (usually icy-pole sticks) and glue them after but I think I will glue as I go after a dry fit.