After checking back I found that I have spent about 100 hours making the forebeam, start to almost finished, with about a third of the hours on fairing. I say almost because although I have finished the beam, I will still have to trim the ends off, cut a slot in it at the ends to fit over bulkhead 1 and glue it in. I find this (100 hours) amazing for a number of reasons, first it didn’t seem like 100 hours of work, spread out as it was over a year doing work here and there. So it is easy to see where the many thousands of hours go on the total build.

They say there is about 4000 hours in a normal 12 meter cat build (although they say that the really good boats take around 6000 hours) and almost half of that time is spent on fairing and finishing, all purely cosmetic. I am figuring on about 25% less hours for 2 reasons, first I don’t have to make a lot of (very fiddley and time consuming) things the normal builder does for example seagull striker and composite chainplates and a bunch of other fittings that a normal rig needs. I know I will have some work to do in building the mast tubes and strengthening around the bulkhead they will be mounted to but I think it would be much less work than a normal rig requires. The other reason I feel I will save a heap of time is I intend to use a lot of internal (and some external) linings which means internal fairing will be very much minimised.

Today I started by giving the underside an initial sand, then I gave the underside the black paint treatment before sanding it again, revealing the low spots needing backfill. In all about another 80 minutes of actual sanding, over about 2 hours including sanding back the spot fills. You can see in the picture of the backfill below the different layers of bog revealed by the sanding and just how little bog stays on the job, each layer or area need to build to the correct fair level less than a millimetre deep.

The backfill I used is builders bog. It is available from Bunning’s and costs about $50 for 4 litres. I about half a cup full on the beam so that much would last a long time. It is a 2 part filler so you mix it as you need, and mix very small amounts because it sets in minutes. After about 10 minutes you can sand it. Very handy stuff. 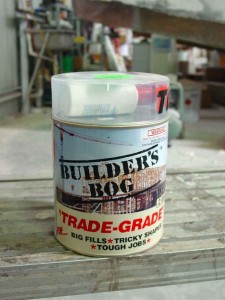 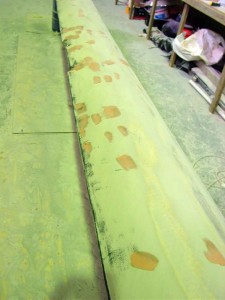 So once I had sanded back the spot fills on the underside I decided to fill the area under the anchor bridle eyes. I was originally going to leave the SS plate exposed as it would resist marking or damage from chafing better than paint but would be much harder to fair down to. I used the builders bog to fill over the plate after scoring it to ensure the bog could grip to it and once it had set (about 20 minutes because it is about 1mm deep) I sanded it fair. 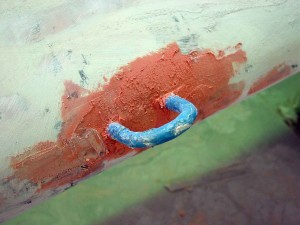 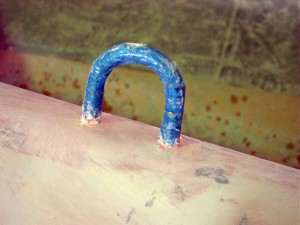 I then rolled the beam over and back sanded the filling I did on top just before I rolled it to do the underside. I spot filled a few I had missed and sanded them also and finished by fairing the leading and trailing edges. The leading edge is very visible so I took extra care to do as good a job as I could. I had quite a sharp point from the top and bottom fair line and I took the sharp point off and rounded it as fairly along the line as I could.

I am very happy with the job I have done on the beam, confident that paint wont reveal a poor job. Ironically I did a better job on the underside than I did on the top given the underside wont be quite as visible.

Then for the rest of the day (about 1.5 hours) I pottered around preparing the duflex I will use in the forebeam and getting things ready. Getting things ready includes thinking about how I will do things, in what order, where etc. Planning and thought process is quite important. On many jobs I will have done them many times in my mind before actually attempting them. Of course best laid plans etc but it is fun and does help.