So with my decision to make March rotten jobs month, I started on the fairing of the forebeam. I had already applied bog in stripes. This is done to reduce the amount of bog you have to sand back off again to get a “fair” surface, the theory being that because you are only taking the tops off. The reality is that because there is less surface to remove it is much easier to sand “flat spots” so you really have to keep the board moving and apply the same pressure and the same number of passes to keep from getting them. Having said that I must confess that I cheated or should I say tried to cheat by using a power flat sander (Rupes) and this exacerbates the likelihood of flats. I kept it moving at all times in diagonals along the beam from both sides and I think I minimised the flats and only used the power sander to take the really high spots down and when I thought I was getting close fair I switched to the manual long board. It is important to realise that with either tool it is still essentially a flat board so is capable of flat spotting the job. 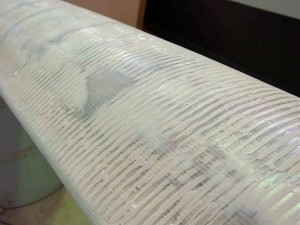 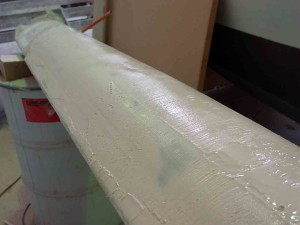 The sanding process really highlights just how not fair the surface was. I thought it was pretty fair already because with the resin from the glassing having a peel ply the surface was quite smooth and looked even and I thought really all I would need would be to fill the rough areas where the peel ply did not really take properly. But once you get the surface fair by sanding by rotating the long board along the length of the beam as you push across the width of the beam at about 45 degrees then the opposite way from the other side of the beam, you notice areas where the bog beads are completely gone with beads all around that area meaning this was a high spot, and areas of various depth bog bead, with the deeper areas being low spots. Assuming you have sanded the tops of the beads fair to each other then these highs and lows are taken out by the bog. (If the high is still higher than the surrounding bog then you may need to re do the beads).

Once you are satisfied the bog beads are fair you back fill the troughs with bog. My method (James taught me this one) was to get a piece of conduit and pull the bog from one side of the beam to the other along its length using the flexible conduit to meet the curve of the board and lay the bog just to the level of the bog bead tops. Its inevitable that you will put some bog on top of the beads which is ok because you still have to sand it again anyway. In fact after sanding the full surface back it is likely I will still need to screed a layer of bog on one more time this time to maintain the integrity of the shape. For this I will use a plastic batten that comes in the edges of chipboard flooring as the tongue of a tongue and groove system. 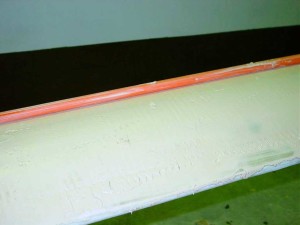 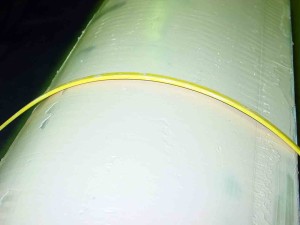 Once the forebeam top is faired I will turn it over and fair the underside, I wont be as critical of this side but will still want it to be fair as it is still visible to an extent. On the underside the curve is inside not outside like on top so I will have to use a flexible sanding board that meets the curve of the beam. Then once I have both sided fair I will have to ensure the leading and trailing edges are also fair, again by hand sanding by wrapping the sheet around the bend and finally once that is done I will highbuild it all over and sand it again!

It is also the start of a new season today so today I checked on the PureSeal sample again. It is now 15 months in the water and whilst it is now starting to show signs of wear and tear, which is a little concerning considering it is on a plate hanging on a rope under a pier so hardly being driven as it would on a mobile hull, nevertheless it is still working and the wear and tear is hairline scratches which don’t appear to be altering the effectiveness. I did however (and this is more concerning) find the first shellfish attached to the plate, just one on each side and tiny so I would think that if left longer more would appear. Up until now the only growth has been algal but crustaceans are usually much harder to remove and are very sharp. In the past I could clean the panel back to original state with just the pad of my finger but I accidentally rubbed the back of my finger and cut myself so I was careful to remove the shell first before rubbing off the algae in the usual way.

The PureSeal is still working. Once I removed the tiny crustacean with my fingernail and cleaned the algae off with my finger pad in the usual way and it cleaned up to original clean so I am satisfied that it has passed to day. The next test is 18 months. I doubt any conventional antifoul would still be effective and a haul out would be needed to remove what was left of it and re apply a new one, so a multi thousand $ job. The question for me now is not whether this stuff is better than conventional anti foul which I am sure it will prove to be, every test it passes after the next is the bonus it will have over conventional antifoul, the question now is whether it is better (more effective, longer lasting) than the copper epoxy that I already have on the hull. My friend Warren has copper epoxy on this boat and it has been on for 6 years without re application. He has to dive under his boat and scrape and scrub his hulls and now has to do so every 2 weeks so that is nearing the end of its life, but I would say he has had a great run.

Today I hope to give the forebeam another sand, this will be a little harder as I have to remove the entire surface are of bog to get the panel fair again and hand sanding only from now on, then if needed I will give it a final screed coming with the batten to finish.