The boat starts at BH0 as a structure but is designed to have a shaped nose made of foam that is sacrificial, that is, if (and the chances are high in the early days months and years) I hit something hard enough, instead of damaging the integrity of the vessel, I make a mess of the noses but they can be replaced without having put a hole in the actual boat. But I have a couple of problems to solve. I spent more than an hour trying to figure out just how to shape the nose. I dont have an eye for it and the outside of the hull is at a different angle (to the centreline) than the inside making the centerline at the keel centered but then the centerline is not at the center of the top of bulkhead 0 and of course there are a number of chines that make the whole thing very complicated, well for me it is. I just cant get my head around it. So I came to the conclusion (as I am sure most other builders do) that the only way to shape the nose is to do it on the boat, get one done right then make some templates to guide me to making the second one match the first one. 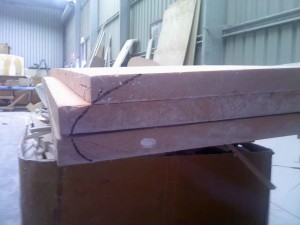 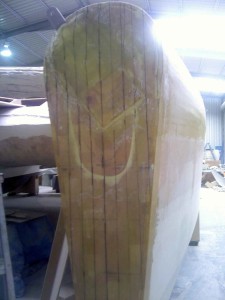 And it is here that the first problem presents itself. I cant put the noses on until I turn the hulls and I cant turn the hulls until I get some decent wheels for my cradles and that is proving difficult. I can find wheels rated to 200kgs but I dont think that is going to be enough, I think I need at least 250kgs and even that for short periods wont be enough. The hull will probably weigh around 4000kgs when finished, and sits on 4 cradles and each cradle has 4 wheels, so assuming each cradle takes 1000kg then each wheel needs to be 250kg, but that assumes they all share an equal share, which is not always the case, for example when the boat is jacked up to get each cradle in place means that the boats weight is unevenly carried by one or other of the cradles. I am hoping that because the load will be temporary and static (not moving) that the wheels can handle it for that momentary excess load.

So with the delay in getting the boat moved I want to progress the work on the nose cones without actually gluing (and glassing) nose cones on. Having come to the realization that I could not come up with any way to map (draw a plan) of how to make the correct nose shape and deciding that the only way I will get nose cones shaped will be by shaping them on the hulls, I started marking out foam panels on the forward face of bulkhead 0 and calculating how much foam I will need. And it was here that I realized the second problem I have.

I dont have enough foam left. I should add that there is no set shape that the nose must be, there are guidelines, for example you dont want the nose too blunt or it wont cut through the water as easily and push a bow wave and water will climb the bow. Schionning have recently changed the styling of some of their boats to have reverse bows, that is longer at the keel than at the deck, which is the opposite of most hulls, that have raked bows at about 45 degrees. I favor the 90 degree square look bows and as sharp as I can safely make them and still have a fair and rounded bow. I was hoping to have the inside and outside lines parallel but this is not possible if I have a square bow because the hull lines intersecting point changes at different points as the chines change each side. So from front on it will still have something of a triangular look wider at the top and narrowing down to the point at the keel but I wont really see that until I start to shape it. So with the foam sheet widths marked on bh0 I can see where they need to start and finish (by height) in order to clear the hull shape for shaping down (so it starts oversize) from the center line out each side of the hulls (each side is the same so I only need to do this once but make 2 sets of the pieces. Knowing these sizes and how far in front of BH0 that the nose cone should be (I was going to make it 400mm but cut back to 350mm, the plans call for 300mm) allowed me to calculate how much foam I needed and it added to more than the foam I had left. The square bow requires a little more foam than a raked bow, cutting it back down to 350mm saved me some but not enough.

So I started experimenting with ways to save foam and it occurred to me to try to make the cones hollow to save some foam. Whilst trying this idea another idea occurred to me that had a number of side benefits besides saving foam. Why not build a ply box to go onto the front of bulkhead 0 in order to save on foam and at the same time creating a tongue and groove (the ply box being the tongue the hollow in the foam that goes tightly around the ply box the groove). This would enable me to fit the nose cones, shape them and remove them again to turn the hulls and give me a key that enable me to re-fit the noses back exactly before gluing them on and glassing the outside. The volume the box takes up saves me enough foam to finish them and also provide some extra stiffening for the foresail anchor points (you can never have too much strength!). A massive win all around and super easy to make. About the only downside is perhaps a tiny bit off added weight in the bows but if you offset the fact the ply box is hollow so the saved weight of the foam volume the box takes up when offset by the ply (9mm x 3 sided box) is probably about even and maybe one other minor risk is that box being somewhat more rigid than foam may damage bulkhead 0 in a collision but if I hit something that hard chances are bulkhead 0 will be damaged anyway so I really cant see a downside.

Next job was to cut the 2 sheets I have left (that’s right I still have 2 full sheets of 1200 x 2400 x 40mm foam plus about half a third sheet in various size off cuts) into the part sizes needed to make the nose cones around the tongue boxes and still I will struggle to have enough to finish. These sheets are a couple of hundred dollars each so I want to avoid buying another sheet if I can help it. I still have to make the edges of the cockpit seating so I may be forced to unless I use duflex off-cuts which I could very well end up doing, I do hate paying for things I am throwing away.

As I calculate and cut the parts needed I am mindful to cut 2 sets of everything, which generally means 4 of everything as each part is the same side each side of the center box on each nose. I am a big fan of pre cutting all parts for a given job then once you start you can go at it until you finish rather than constantly starting and stopping to cut the next parts, but as you are low on material it pays to know if you have enough material to finish a job before starting. I do, just. So next I started attaching the foam to the box. The idea is I will build the foam up around the box with 2 large foam parts either side of it, screwed on to be held in place, then I fill in between them, gluing the foam in but not to the box yet as I need to be able to remove the nose cone again until I am ready to glue it on, so a layer of plastic between the bulkhead 0 and the foam will fix that problem. The in filling with foam creates the key effect holding the foam nose in place after the screws in the sides are removed so the nose can now slide off and on the tongue and groove box. Then I add the rest of the foam to the outsides of the 2 starting sheets of foam to fill out the nose to the full width of the nose.

Today I glued the foam in the keel of the nose between the 2 first sheets. I made a slurry of resin and glue powder, very runny, smeared it onto each foam face and glued them all to each other and to the 2 sheets screwed onto the ply box. When this is set I will do the same along the top of the nose cone above the box and then finally the foam in front of the ply box.