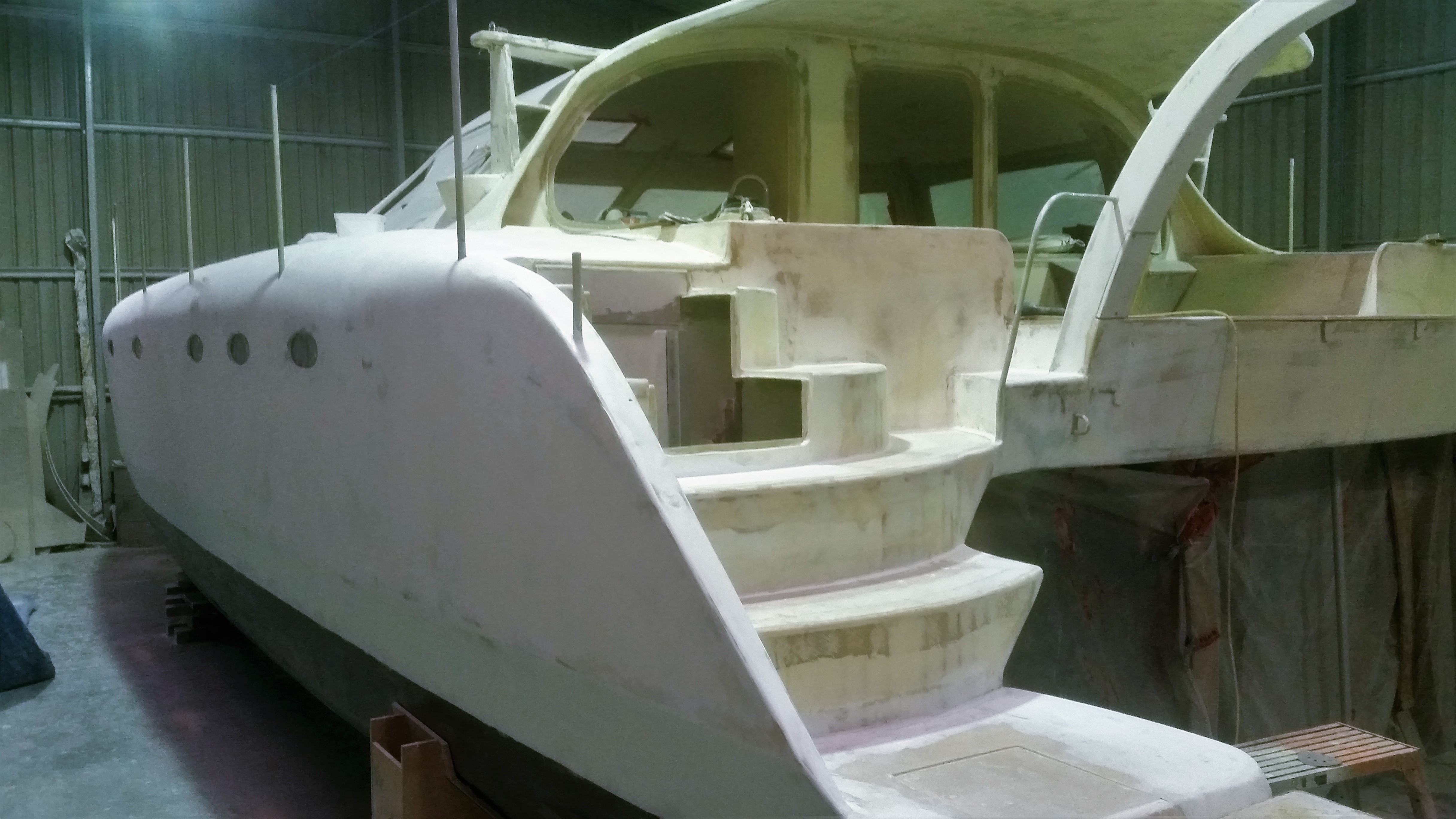 Ok, there have had to be some changes to the plan going forward.

So lets address the Blue Whale in the room…..Sorry Blue Whale (and Sea Turtles and Coral Reefs and Glaciers and Kiribati and Amazonian Rain Forests and Sumatran Tigers in fact, pretty much all of you) we are going to have to let you go. Why? So some white people in a far off place known as the “rust belt” that no longer have as meaningful and well paying jobs as they used to (yes most of them still have jobs, and pick-up trucks and enough food for 2 of them and decent enough housing that some folks can only dream of….and cross oceans in leaky boats to try to attain) can feel like help for them via a disgusting, misogynist, sexist and racist serial liar and self proclaimed although disputed Billionaire (initially rich from inheritance he then lost most of it then got richer exploiting workers, contractors, suppliers, tax payers and investors) is on its way. Ironic barely scratches the surface.

Why they would fall for a con scam like that or believe that someone so vile could care less about them is hard to believe and we all must now pay the price for that, but at least its not the status quo, apparently that would have been much worse. Yes Polar Bears you too, sorry, I know you didnt vote for him but what can I tell you.

Last week I watched Leonardo DiCaprio’s documentary and he was not very optimistic before the election, he must be absolutely terrified now. As I am. Its pretty much over for the planet as we know it now, its just a matter of time. We were told that we are approaching tipping points and that its now or never to act, this guy is going to dismantle even the modest progress to date, so its going to be never unfortunately. But at least the rust belt folk now feel like someone is listening.

In the last 30 years, a full half of our beautiful Great Barrier Reef has been killed by our neglect. I now expect that rate to accelerate as conservative governments around the world, empowered by the US will start to reverse the meagre climate policies put in place in the last few years. Our government will almost certainly take advantage of the US wind back to do the same here in the name of economic gain.

So for me, finishing the boat and getting out to see the reef before its gone has taken on a new urgency.

(I originally wrote much more on my feelings on this but thought better of boring you all with them, after all this is not a politics blog, but climate change is dear to most nature lovers hearts and lets face it, its hard to be a yachtie if you dont love the ocean).

I have had a minor change of plans also. I continue with the fairing and had expected that I have finished fairing the hulls and wouldnt be sanding them again. Dean, one of the boatbuilders I share a shed with (there are now 2, one that thinks I need to start again on re-fairing and Dean who thinks I can still get a reasonable result from where I am) thinks I must put one more coat of highbuild on. Not to get it fairer than it is now but because I have sanded through the highbuild to bog or even glass in parts. Not many parts but enough for it to be a problem. The exposed glass is not a problem but exposed bog could be. Its porous and will absorb some moisture and expel gasses before and after the paint goes on.

The highbuild is a seal coat and primer in one. So if there is no seal coat as a barrier between bog and paint, the paint being much thinner will be effected by heating and cooling daily and could form pinholes over the unsealed bog and eventually degrade faster than it should and let water under it which then accelerates the degradation. Also where there is no highbuild there is no primer for the paint to stick to.

In short, just put one more coat of highbuild on for structural not aesthetic reasons, be careful not to sand through it when keying it again (or perhaps paint over it while its still green to avoid having to sand it, I will talk to some people about that). So if I sand again I am not trying to get the boat fairer which would sand through some of the same spots until it is fully fair, I am just sealing it. So this isnt about making the boat look better, its about making it stronger, paint isnt of itself structural but it protects the actual structure from degrading. 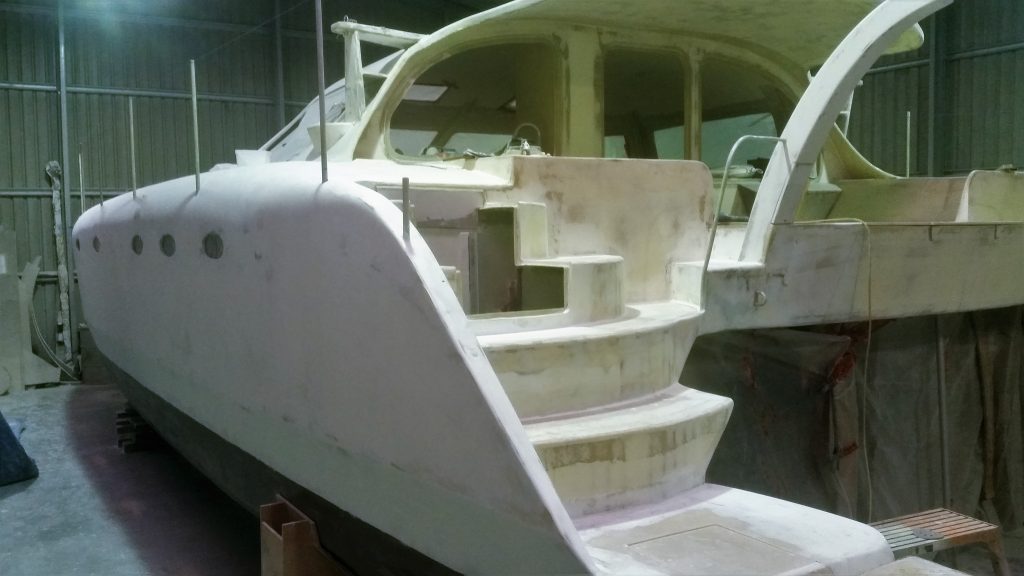 Besides the boring fairing (I have completed the hull sides, the inside bows and forebeam and foredeck, and most of the rear steps with the help of Darren so big shout out and thank you to Darren) and dry fitted all the stanchions and have started on finishing the bi-fold front doors) so that just leaves the cockpit and surrounds to do (including the sheeting mounting points). 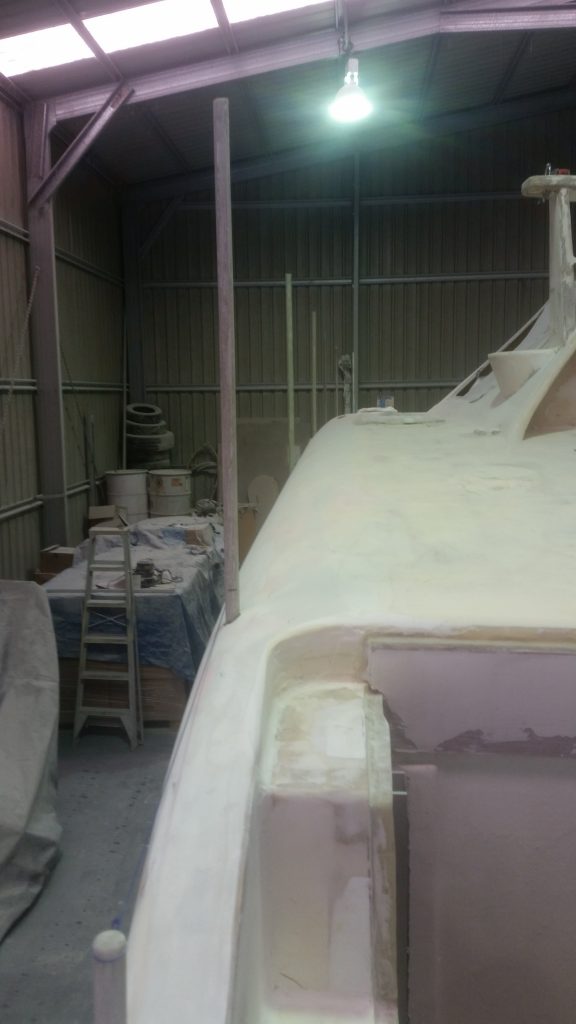 The rear steps got a re-cove to all the joins and Darren and I sanded them. I am not fairing the step bases as they will be covered, so only the risers (vertical faces) and the coves. Darren helped with the port side stanchions as Terry was out cruising. All went in the same as they did last week, except the one behind the daggercase. Because the wine rack was already in place on starboard I had to mount the stanchion against the rear face of it, but on port the grey tank allowed me to mount it in front of the eventual plate that will seal it in. Nice. (plate will be removable in case I have plumbing issues). 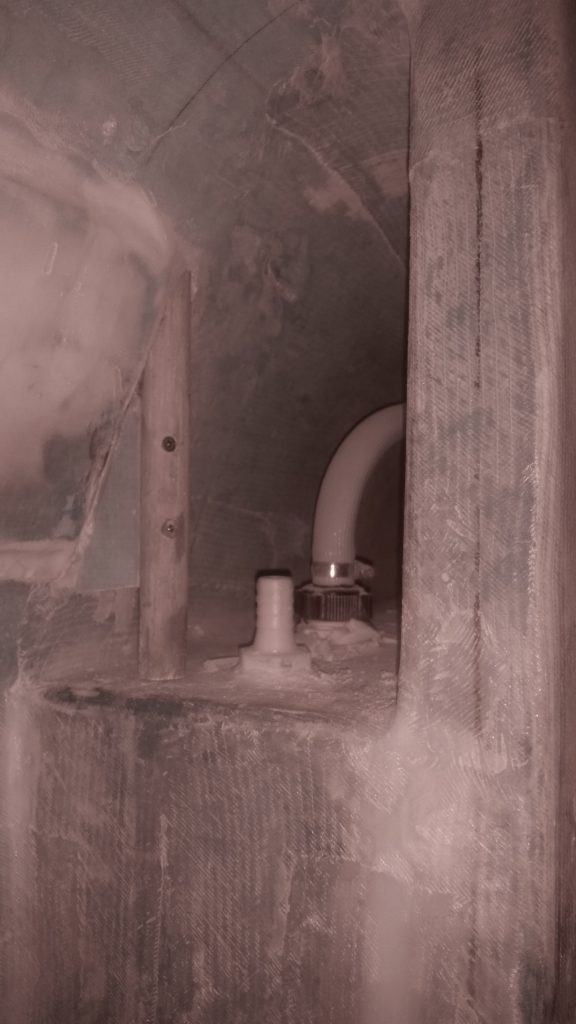 I needed the door ready as it will get painted when the rest of the boat is painted. I will also cheat a little with the sheeting points. On the bottom triangle each side, the space inside especially in the corners is very hard to get to to sand. So I will box them in with a plate front and back. Terry, back from cruising Lake Macquarie helped me route in the rebate for the window perspex in the doors. 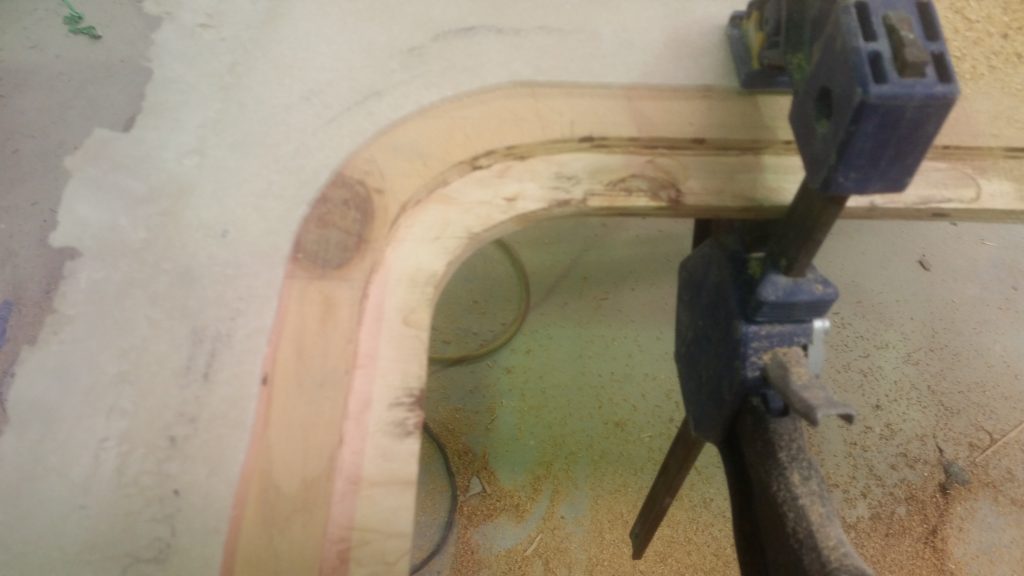 I had some issues with the radius of 2 of the corners. I needed to create a plate for the router to run up against as it went through the corners (we used a sail batten for the straights) and it showed that 1 radius in each window was out compared to the other 3. I can now fix them to match the others but cutting a little more out of the corners that are out. 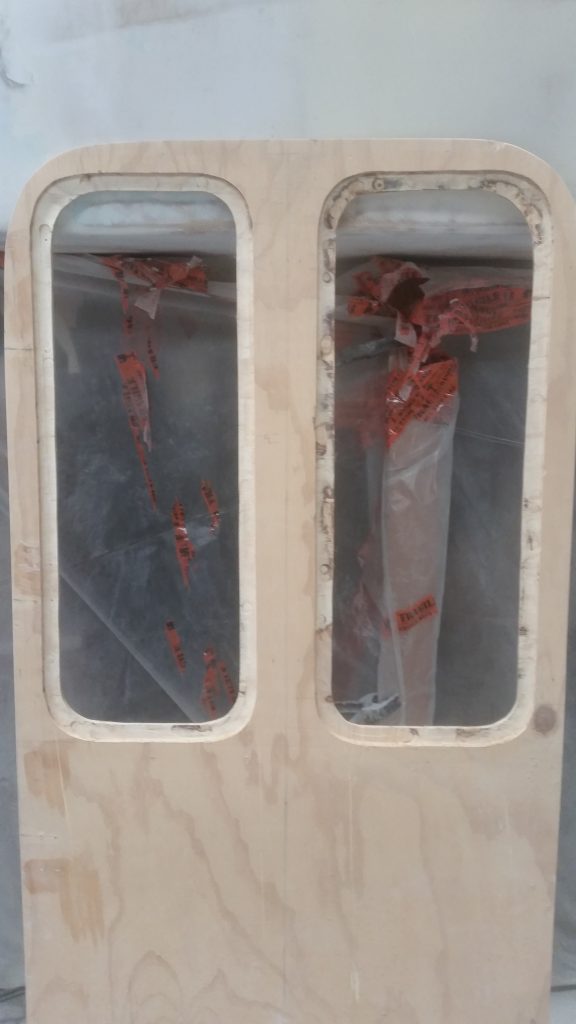 I still need to cut the door in half and then resin coat it. Then when I spray the boat with its final highbuild I will give the door a coat and sand then it can be painted with gloss the same time the rest of the boat is. 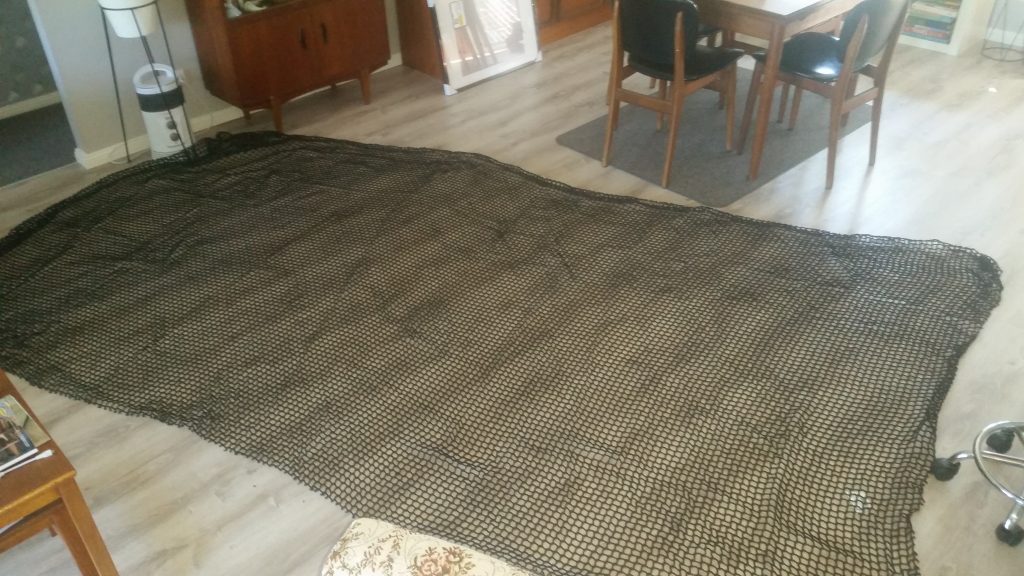 We are getting there. I still hope to be ready to paint in the next few weeks. The cockpit is fiddly but like the rear steps I only need to do the coves and the vertical faces. This week I bought some netting from Haverfords to make the tramp nets. The netting comes in 4 meter widths and my tramp openings are 2m x 2m so I only had to buy 2 meters at $85 per metre. I have to weave the edges around fibreglass rods or battens. I may  also sew panels of vinyl each side to strengthen and finish it. 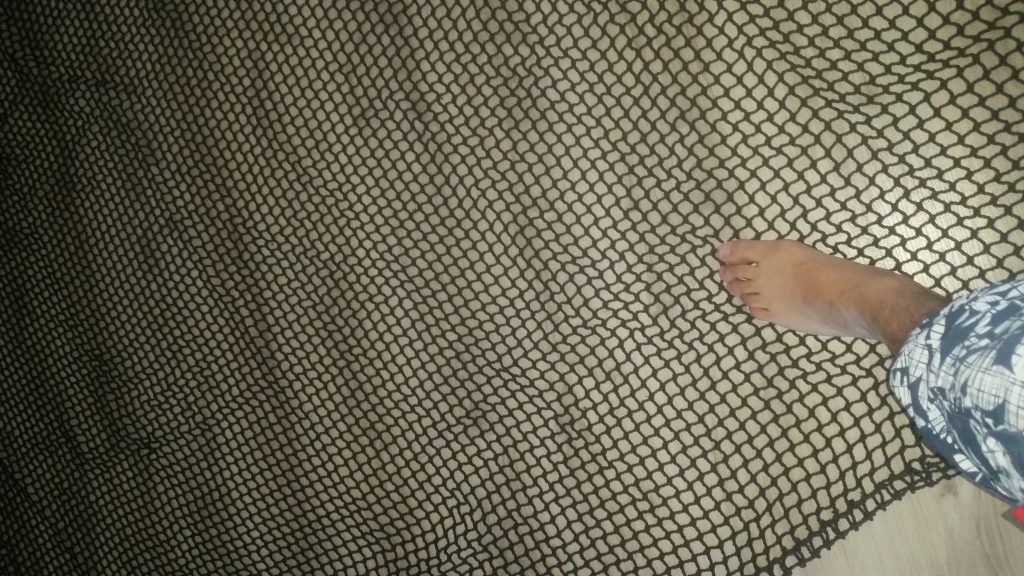 I am down to a list of 5 the things I must buy or pay for before launch now. The steering hydraulics. The outboard mechanic. The perspex for windows. The sealant for windows, hatches and ports. And the launch costs to which I include ropes, fenders, anchor chain. That’s about ten grand. I have $500 and I need that for more highbuild. So even though I might be painted and ready to launch soon, I may not be able to until I save more money.

One bridge at a time though. More sanding and more highbuild first. Hopefully there is still some reef left by the time I am ready.

(For long before I started building I have harbored some concerns about the future. Fear is probably too strong a description, just an ill feeling that I dislike living in our consumer driven world. Although I have never been a full blown prepper, I have watched the TV show Doomsday Preppers and whilst I think some of them are nut jobs, I empathise with some of their fears. I dont think there is an imminent breakdown of society or a sunspot frying all electronics or any of the other nutty fears highlighted on the show. And I dont fear being attacked by other people trying to get my food or water etc. But I do fear that we just dont care about the planet enough, greed is just too entrenched. Those fears have grown a notch this past week. One of my daydreams has been to retire to the south Pacific to a place like Vanuatu and live off the grid, never read the news again and a simple life. My urgency to fulfill my dreams is a little more front of mind for me now. Unfortunately, some of those Pacific Islands are now under real and increased threat.)