The first uni rope has been wet out and inserted into the trough. I started with the rear bulkhead (BH7) and I decided that rather than capping it, letting it set then gluing the pieces I cut off back on again later, I could just glue them on whilst filling the trench with glue. Which is what I did. James helped me roll the uni and carry it to the trench which made the job quite fast and simple. We did it in less than 2 hours. I think I will be able to do the uni ropes on my own. The open time of the ADR is fairly good (nearly an hour) in cooler weather, so if the weather is cool on the weekend I should be able to get the rest of the ropes done.

In the flat area of the rear bulkhead (the part that didn’t have a part cut off) I used the mdf and elastic bands to cap the trough after I filled the rest of it up with glue so the cap will square the bulkhead back off.

I will do this with the rest of the bulkheads so that they are ready for any strip planking or panels to be glued to them. I wont be able to get any more done until the weekend as I had a last minute 2 day trip to Auckland, New Zealand and get back late on Friday afternoon. Auckland would have to have one of the biggest marinas I have ever seen (Manly in Brisbane goes close) and I saw a number of very nice cats albeit from a little way across from public areas to secure marina berths. Auckland is a beautiful city and I cant wait to sail there once MM is finished. 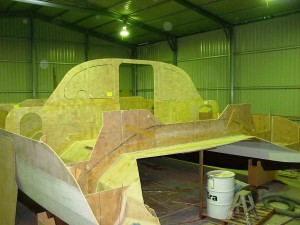 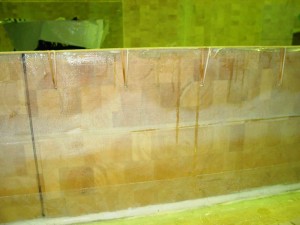