I got no work at all done this week. To be honest I have just been a bit lazy because it has been so cold in the evenings. So today I got stuck into running the first of the plumbing into the starboard hull. I have decided to try to keep the plumbing as simple as I can. I will have 3 fresh water tanks each one 200 litres. I have decided that for the sake of 1 extra pump it would be better to have a separate tank for each hull and 1 spare that will only ever be filled if I am going on a long cruise to areas that may not have water available. If I ever get a contamination in a water tank I will still have the other hulls tank to rely on until I can refill. I can also use the pumps via taps to pump from one tank to another. And the same goes for waste. I will have separate holding tanks in each hull for both black and grey water, that way if a toilet ever breaks down which I am sure they will, and at the most inopportune time (usually when guests are onboard), I wont have to affect and immediate repair because I have another fully functioning toilet albeit in the other hull. I do like redundancy!

So with all of the roughing in done I had to decide how the waste grey water would be extracted. I have a space in front of the toilet, above the waterline where I can hid a small grey holding tank (the port sides grey tank is behind the dagger case and at 1000mm x 600mm x 120mm it will hold 72 litres which should be ample) of about 50 litres. It is a little smaller than the port side but wont have the kitchen sink draining into it, and is not likely to see anywhere near as much use. In fact I doubt it will be used unless we have guests aboard. And with gravity out the tanks will rarely be closed and called upon to actually hold any water. About the only place would be in a marine national park (Great Barrier reef perhaps). The black tanks will be used as tanks but will have pump out ports on the deck.

The space under the sole in the ensuite is not very deep so I decided I would lead a pipe down to a sump in the bedroom but I could not put is directly behind the bulkhead because a lot of that space is taken by the mast post. It does not go through the sole but I wont have much space left for an inspection port in order to access the submersible pump. I will also have steps up to the bed in the middle section so the best place for the sump is at the back of the bedroom hull. From there a pump will send the waste up to the top of a holding tank and from the bottom of that out through the hull just under the waterline. With a breather at the top of the holding tank that will double as an overflow through the inside of the hull under the trampoline, it (the breather) ensures I can never have a siphon back up into the tank. I also avoid a common problem on directly exited waste, blow back from wave action back up the waste pipe creating a geyser from the sink hole whenever waves form in just the right way to blow water at pressure back up into the boat. I might still have them but they will form inside the holding tank then fall back out again once the pressure stops.

When I set the pump out pipe I ran it level because fall is not needed when under pressure, the water is going to be pumped up to the top of the holding tank about a meter above water from below the sole which is below the waterline. But when I set the larger diameter drain pipe I needed at least 1mm per meter fall. At first I cut the rear hole too high so I cut another hole and will just glue the piece back in, and to be absolutely sure I have 10mm per meter fall.

I have decided I will put a small vanity basin in the starboard aft stateroom, just for a drink in the middle of the night, or brushing teeth. So its waste will run forward to the sump and its supply (cold only) will come through the furniture, under the sole and back up to the faucet along side the waste downpipe. So today I went to Bunning’s and bought some conduit (a plumber told me that it was exactly the same plastic as used in plumbing) in 3/4 inch for the pump out and 1 inch for the waste to the sump which needs to be a little bigger because it is just gravity but the pump is under pressure. And then I proceeded to cut holes in the webbing and bulkheads to lead the pipe-work through. I have cut bigger holes than needed with a holesaw so that I get a 5mm glue bead to seal the balsa panels. I cut the pump out pipe in first. 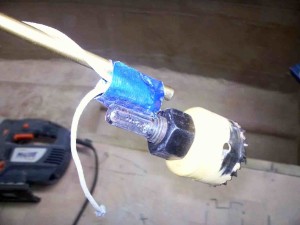 And then the strangest thing happened, one of those Murphy moments that must happen to all builders and have them scratching their heads and muttering under their breath about why these things happen to them. In the toilet cubicle I had glassed a ply base so as to have a level base for the toilet because the hull is starting to V in this section. For it to be bedded down I first glued and glassed a piece of ply in a triangular shape to the shape of the V of the hull and then level and flat along the top. I then glued the ply base to it and back along each hull side to the bulkhead, forming a sealed box underneath it. But I now needed to run the pump out pipe through. So I cut a hole in the ply front with the holesaw and the moment I pushed through the holesaw came out of the chuck into the sealed box. What the!!!. How the hell am I going to get it out? I was convinced I would have to cut a hole into the base to get it out and re-glass it. Not a major problem but really annoying. It just wastes a few hours. I have to get it out for 2 reasons, the holesaw isn’t mine but more importantly you cant leave solid sharp things like that banging around in there because it might punch a hole in the hull. Unlikely but you just cant risk it. Year after year, wave after wave banging around. No it had to come out. Then Greg, who owns the holesaw asked if I had a magnet. Dennis did so we tied it to a string, attached that to a stick, fished around for about 20 seconds until the magnet grabbed the holesaw and I gently manoeuvred the shank to the hole and gently worked it out of the home. Over as fast as it started but one of those amusing moments that have you shaking your head.