On Monday afternoon I sanded the dagger until is was as fair as I could get it. This meant that I had sanded down as far as I could because I was down to glass again, there were still lows and holes (more like gouges or scratches) in the surface. These would need to be backfilled, which I did using the trowel edge to ensure that it was level with the highs needed and only filled the lows not added height to the highs. 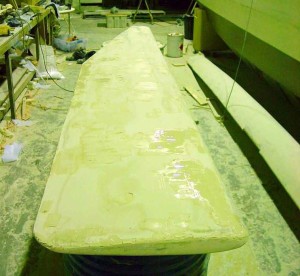 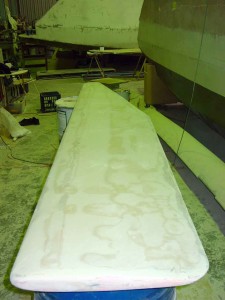 Today I sanded back the backfill. So the dagger is starting to look like a patchwork quilt of different shades of bog. The idea is always to add as little bog as possible so the tendency is not to fill enough. The more bog or the bigger the bog patch the more sanding needed to fair it back which means more effort. So I much prefer to add a number of thin patchy layers than adding huge areas of bog just to sand it off again.

I have had a email asking how the bog stays stuck in the areas that are low if they are not scored by the sandpaper to key them (actually this is more pertinent when backfilling notched trowel bog lines). My answer is imagine 18 balls three wide, 3 deep, 2 high, the middle bottom ball is sitting on the non scored bog layer but all the balls either side are on keyed bog. Now imagine the balls are atoms of bog. The 8 balls against a keyed surface get a mechanical grip to the surface and the middle ball gets a chemical bond to all the balls either side of it and the all 9 bottom balls get a chemical bond to the balls above it and they all have a chemical bond to each ball they are in contact with, and then there are millions of these groups all in chemical bond with any ball (atom) they are touching. This is a simplistic explanation but with millions of atoms mechanically bonded to the surface and joined to each other chemically you get a strong surface bond and any atoms that have a weaker mechanical bond to the surface are chemically bonded to atoms that do have a good mechanical bond and as a total they are in such a strong contact.

It is not until you stand one of the daggers up you realise just how big they are, nor do you realise how much weight you add with the glass and resin. The weight of the finished dagger is about double the weight of the shaped blank that is not yet glassed. To give a perspective of the size of a dagger, I stood the finished dagger (on the forebeam which is on the floor next to the hull and about level with the bottom of the hull) next to hull roughly where it will be on the hull, and stood next to it to give it more scale. When the dagger is laying down being sanded it does not seem so big. 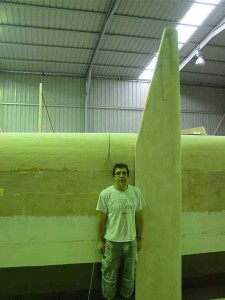 I still have some work to do on this dagger, I have to cut the sheave holes and I also still have some minor fairing work (another tight wipe, which means a really thin layer) of bog here and there, mainly along the trailing edge then I will need to resin coat seal it, highbuild layer then another final sand before it is ready for painting (the bottom third will get 2 coats of copper epoxy the middle third will get paint but not gloss as it wont ever be out of the case and the top third will be gloss finished). But for now it is finished enough to build the cases off. So the next task (over the long weekend) will be to make the dagger cases.

Tomorrow I will try to get the female molds for the dagger case made, I need about 5 or 6 identical molds and if I get time I will set them out on the bench ready to make the 4 case halves in the same mold. Then over the long weekend coming up I may just be able to get the 4 halves made.