I had made a start on the final section of the unfinished navigation cabinet located in front of the helm inside the saloon, it will also house the entertainment and all electronics on board. One decision we have not made yet is if we will use the plotter screen as our tv/dvd screen. At 15″ it is huge for a plotter but not quite big enough for tv or dvd inside the boat. It can swing out and be perfectly acceptable for when we might want to watch a dvd sitting in the cockpit but as our regular screen for normal tv it seems a little small. There is no reason it cannot be stowed when at anchor (which lets face it, is 90% of the time) and we will have a 19″ tv on board and if we want, because the plotter has a video out, we can even use the 19″ tv screen as the plotter screen whilst it stays stowed under the hinged bench top.

Anyway, the cupboard size was already set by the bottom and middle shelves and kickboard being in place having been installed a few months back . All that was left was to complete the wrap around side and to make the top, which has the plotter box incorporated into it. I had made a start on the box where last month left off. The box is really just a ply base with 2 duflex sides, the back of the box is made up by the bulkhead and the front of the box is a rail that forms the front rail of the cabinet, to which the tops of the doors will be latched (magnets to hold them shut) and maybe a lock (it might be a good idea to have this cabinet secured). With the box size decided and the rail and exposed edges back filled I could glass the box in. The curved cupboard side has been glassed in (the side was made in 2 parts the curved part and the flat side but only the curved section was glassed in at this stage). I glassed the plotter box to the front rail first off the boat so that the entire part, front rail and box could go in as one. So having dont that the night before so it was set, it was a fairly easy task to line it all up level and plumb before glassing it into the cabinet to set.

Then with the plotter box and front rail in, all that is left to finish this cabinet is to fit a small panel to the side of the cabinet at the doorway and the tops. The panel is already cut to size and has been screwed to the side of cabinet for some time. It must be glassed in before the top goes on, I already have to crawl deep into the cupboard to glass the inside under the middle shelf and there is no point doing that above the top shelf when I can leisurely reach it from above with the top off. But in the meantime, the top is being glued together from the out taken panel from the window at the helm. Nothing gets wasted if it can be helped, especially off-cuts as large as the window cut outs. Duflex is expensive stuff so where I can I join smaller bits to make larger ones I can use and of course if the part needed is smaller than an offcut I simply cut it out of the offcut. The window cutout has a curved piece that needs to be glued into it where the steering riser was situated into the window space. There is also a shortfall in the front corner that also needs a piece glued in to completely cover the space required. In order to strengthen the joins I have used a tongue and groove method (sometimes called biscuit method) by cutting a deep groove in the balsa with the die grinder on each side of the joins (into each piece being joined) and a tongue made from a strip of pine timber. I will still glass the join on the underside of the top but wont on the topside as this will be laminated and will be plenty strong with just the laminate and saves fairing out the tapes. (both sides of the join on the underside of the top still get glassed to the cabinet sides which effectively also holds all the parts to the cupboard so the join cannot open anyway. Also, because the top will have a hinged middle section that will have hinges screwed into it and because balsa is a very soft timber and does not hold well, I have glued a pine strip into the edge of the top that will house the hinges.

The tops (there are 3 sections of the nav cabinet top 1 of which is a lid to the plotter box) once cut to size and the pieces that make up the larger part glued together, the edges that will be exposed are de-cored and back filled. Once set the top is refitted to check before sanding the edges down square and smooth. Then the tops were glued and glassed onto the cabinet. Getting into the cabinet to get the underside of the top glassed to the bulkhead and cabinet sides was hard work. I usually wear a mask when doing big glassing jobs, I dont bother for smaller jobs but this is a job I would usually wear it for but cant because I can barely get my head and shoulders into the cabinet deep enough to reach the areas I need to tape and with the face mask on there is no way. But being in a confined space on a hot day coving with freshly mixed compound and then applying a wet tape means breathing fumes at very close range is unavoidable. It was hot and the combination of the confined space, the heat, sweat dripping into my eyes and being on my back and squeezing into the cabinet was extremely uncomfortable and exhausting. 4 days on and I can still feel the bruises this caused and my back hurts so I am paying a price for that nav cabinet. But just admiring my work afterwards and now makes me feel it was very much worth it. 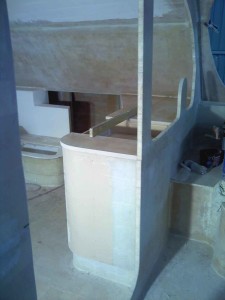 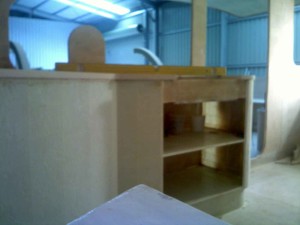 I still have to make the lid for the plotter box and that is pretty much it for now on the nav cabinet. The doors are part of the final finish and fit so wont be done anywhere on the boat until near the end, so I dont count that as not finished for now. Next job is to move onto the galley cabinets.