After the test on the weekend, we have an idea of the minor mods needed to get the hull to where we want. We noticed that the transom height was a little low for a short shaft motor so we will build that to the correct height. I have bought a long shaft so I will need to build mine even higher. We were worried that the nose might lift at speed and that wind could get into the tunnel and flip her but as hard as Warren tried he couldn’t get the nose to fly. So the hull extensions past the transom work really well. We hadn’t covered them in yet in case we needed to extend them but that is not needed.

So today we put in a few more hours and finished more of the first dingy. We wanted to be sure we dried her out before glassing as we did test it with some exposed balsa but it was so stable that we doubt it got wet at all.

We finished coving and glassing the insides of the hulls ready to glass the lids on which we also did, and we also glassed on the anchor well lid. We glassed in 5mm ply floors into the centre hatches to just above the height of the centre area so we could drain them into there. (Don’t forget to give the underside of this ply a seal coat of resin). The anchor well can drain directly out from below. There will be bungs in the back of the centre area to drain it out.

The lids for the hulls were glued on and once they set a final trim and shape to round off the edges etc will take place before final glassing and finishing. I had 2 offcuts that were almost the exact shape needed for the bows, just slightly oversize. The rear lids were then glued and screwed. You could use one piece lids if you have them.

Once the hull lids were on we cut and kerfed the anchor lid. Warren wants his anchor lid shaped like a Thundercat, which has a curve down (hollowed) shape which at speed puts downward pressure on the bow, like a reverse plane wing. To do this, the kerfs are on the outside of the lid, the inside of the curve. We glued the slots, then glued and screwed the front, then wedged the middle down to the curved shape we wanted then screwed the back. Once set we will put a layer of glass on. I don’t want mine that shape, I want the traditional reverse D shape so my kerfs will be on the inside and I will cut 2 shaped pieces and glue them inside the anchor well to glue and screw down into to get the shape I want.

We also cut the sharp bows off the hulls and put a mini bulkhead of 12mm ply in to seal them and glassed them from the inside, they will also get glass on the outside when the lids are glassed on. Then we will shape rubber bows to the old profile and glue them on.

With the lids on, we only have the rear buoyancy compartments to build and the transom plates to fit, which will also seal the rear bulkhead, to finish the structure. Then the fit out of hardware, (bungs, cleats, rowlocks?, towing points bow and stern and a hold rope down each hull) to finish. We have still to decide how we want to final finish the hulls, probably just a coat of white and a coat of clear. About another 6 hours each today for a total so far of about 30 hours for Warren, 35 for me. My guess is about another 6 hours each and then we can start putting together the second boat. Most of the parts were cut as we went so it should go together fairly quickly now we know what we are doing. This will also give a good idea what it would take to build 1 boat, with plans, from scratch. 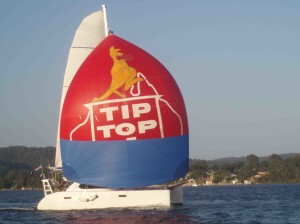 This is Warrens cat, a Crowther 40ft, very similar in dimensions to MM. This pic was taken on Australia day with one of ex America’s cup winning boat Australia 2’s spinnakers, that needed to be cut down to fit.

Soon I will spend some time on MM, remember, the big full size boat I am building! I have almost finalized a new warehouse to finish her (The leases aren’t signed yet so I don’t want to jinx it!) so I could be joining hulls next month all going well.