With the under sole frame for the oversize inspection port that I am making measured out and the aperture cut out of the duflex sole I glued and glassed the ply frame that will house the male screw thread drum top to the underside of the sole. I found the best method of attaching it so that I could be sure that it would hold the weight of someone standing on it was to cut a ply ring about 10mm wide (the width of the rim) and to screw from above through the ply base through the plastic rim of the bin top into the ply ring. With glue (I pre keyed the plastic) and then a cove I glassed it all to from the ply ring down the cove onto the underside of the ply base. The frame was precut to the exact height of the drum top with lid on flush with the top of the sole so I turned it all over and screwed the lid on to be sure that it went on and that no glue that came through from below would set and stop the lid from going on, and then I removed it for a moment to smear glue down into any voids and create a small cove with my finger and screwed the top on again to ensure again that it did, removing it and replacing it a few time before leaving the lid on as it was pulling the entire structure together when screwed down tight. Once the glass had tacked off a little I gave it a coat of white epoxy to seal it.

Jake and I also started on the second dingy we cut the parts for more than a year ago. We cut them out of 9mm ply to see if we could make this dingy design even lighter. The ply is harder to keep fair so any weight advantage may be lost when it comes time to fair it by the need for more bog. We wanted to keep to 9mm ply because 16mm ply is not as flexible over the length we are building and wont curve to the design without kerfing. We are using a stitch and glass method. We “stitched the first two ply panels to each other using a pine triangle bead by gluing and screwing the panels into the bead. Once the glue had set from the first panel we remove the screws and glue and screw the second panel to the first. (We got as far as gluing the first 2 panels, the hull inside panels, to the bulkheads last time before Jake lost interest, but he is keen as mustard now) and today we are gluing the hull bottoms to the inside hull sides. Once set we will curve the join so that glass will go around it, run a tape over the join then later we will glass the entire outside and probably the inside of the hulls. More as we go, I am still building my boat, not stopping my build completely like I did when I built the first ones with Warren. 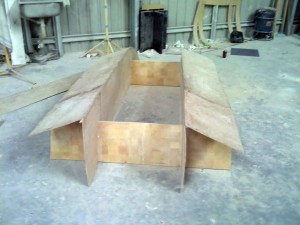 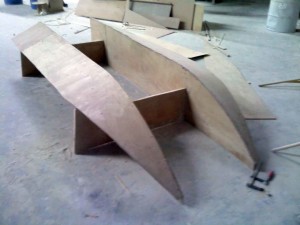 It was a not a particularly hot day but was sunny all day and the heat in the shed soon felt like it was a hot day. I managed to work nearly all day but with the dingy work I am only counting 7 hours.