An early morning start (7am) was needed today and I am glad I did because by noon the shed was hot again but fortunately working under the bridgedeck is actually a few degrees cooler so I soldiered on until 3pm making 8 hours for the day. I also had a few visitors through the day meaning I lost a little time chatting with them. I would have preferred to work another hour and get the last of the duracore planks onto the roof but it now has to be striped and the rest of the roof striped with 40mm strips as I hit the big curves on the side. It gets very tight at the front as the strip wants to twist as you try to achieve the curves side to side and fore and aft. I was tired and hot and this next bit is tricky so I thought as keen as I was to get it done, it would be better to be fresh and thinking straight to get a good job of it.

What I did get done was to plank a little over half the roof from the centre out each side. The roof is about 4.8 meters wide and I have about a meter to do each side. I started by cutting the excess duflex off on one side to make it a parallel plank. I then kerfed the panel, in the end I probably over did it on the kerfs. When I dry fitted the panel it wanted to sag between some of the frames and I had to use the duracore planks either side to keep the shape. I also had a pine brace on the back to stop the kerfs from folding forward and snapping at the glass. The space under the boat is not quite enough to turn the 1 meter wide panel over (I need it upside down to apply the glue to the kerfs) and almost cut it in half but decided to go ahead with it in one piece and I am glad I did, I had room to pull it forward to turn over, I filled the kerfs with glue, turned it back over and attached it to the frames. I left one of the duracore planks attached so that I could butt up against it to ensure it went on square and to regain the correct kerf shape where the duflex wanted to sag a little, using pine tabs to pull it up or push it down flush where needed. I have also taken out most of the hard turn with deeper kerfs but that comes with its own problems as occurred later on a duracore plank. I had filled the kerfs with glue and had turned it over and placed it on the frames but with only a mm of balsa the pine veneer tore under the plank weight and almost completely broke in half, a nightmare to fix as it causes a hard turn at the break. But because it had just hung on and I caught it before it completely broke I was able to gently fix it in place and back fill the tear with glue and get some long screws from the panel along side into it to hold the curve shape while it sets.

Now that I am at the sides where the curve down gets more acute I will have to cut the remaining duracore planks into strips and to strip the rest of the duflex offcuts into strips and strip plank the roof in the same way I did the hull to deck curves.

I have been waiting to get this roof done for many months and am really happy to finally have something to show for it. After a few false starts this month I finally have some planks glued. I was disappointed to stop today but on reflection it was probably better to stop here then sand the joins when they set from along side the planks each side whilst still standing on the ground rather than when the roof is complete and having to climb onto the roof to get to the centre joins to sand them. I want to avoid putting my full weight on the roof until it is glassed. Patience is definitely a virtue when building sometimes. 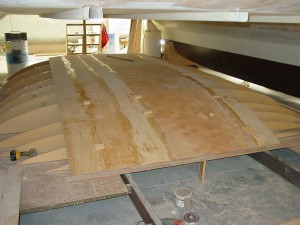 The next task of stripping down the planks and offcuts will take a day or 2 then I can glue them on to finish planking the roof next weekend. Perhaps if I am lucky I may get to finish the strip planking before the weekend and spend a day next weekend glassing the top.