Back on the boat today and I managed to get a fair bit done. First of all I remembered something I had read a few times on other builders sites, that is not to get lazy because the end result is in direct proportion to the work put in on the little things. Whilst I was away I wondered whether I had cut some corners on the tabbing on the under bridgedeck so the first thing I did today was to double check my work, and whilst I doubt it made any difference, I added some more tabs just to be absolutely sure that I have done a thorough job.

Then I started on the filling. This is a tricky job. I finished masking the inside of all of the larger gaps so that the filler/glue would not just push out the other side and run everywhere. I then started mixing some filler and resin/hardener mix in one pot and some resin/hardener in another. The theory being that I would paint the joins with the resin/hardener first. Then I would go along with the filler and fill the joins with the other. The first lesson here is that different substances mix differently. What I mean is I remembered the ratio of resin/hardener to powder when mixing the glue using 403 but with the filler powder 411 it doesn’t dissolve in the way the 403 seems to do, it really adds to the volume of the liquid far more. So I did the mix the way I did with glue and pumped 5 pumps of each thinking I would need that much to get as far as I had wet out with the resin/hardener (and would have been the correct amount if I were mixing glue) and I ended up with a very large pot of filler that went off about half way through using it all. It got extremely hot, so hot it started to smoke, and that is not an exaggeration. Its a shame I couldn’t get a photo of it, but I was all gloved up and didn’t have time to stop. I thought it would spontaneously combust so I filled the pot with water.

So I quickly mixed up another smaller batch and got to work finishing as far as I had wet out. There is another tip here, as this is a new task with materials I haven’t used before you should always start with a small area and get used to the materials. It takes a few pots of filler before you start to get it to the correct consistency. Too runny and you cant build it up at all, it just runs all over the place and seeps away into the join leaving a shallow trough at the surface, too thick you cant get it deep into each join and it goes off much faster. One final thing about mixing the filler, the powder is so fine it is almost already a liquid. Anyone who has ever seen graphite powder will understand how fine it is, and when mixing it is almost like mixing 2 different liquids, except as the resin gets hold of the powder it gets gluggy, lumpy and uneven then you smooth it out into the paste and then add more powder to get it thicker as needed.

In the end I found a great compromise method that seems to work. I fill in 2 goes, the first runny enough to get into the join easily and I didn’t bother trying to build the filler higher than the panels in this go. I make the first mix about the consistency of toothpaste, anyone who has ever done any plastering, it is about the same as the filler for that, then after that filler has started to go tacky (about 15 minutes which is about the time it takes to finish the row so I go back to the start of it for the second pass) I make a thicker mix about the consistency of putty and go over the joins again, building them up higher with what looks like a bead over the join and building it up into a mound over each side and smoothing back down to nothing. The reason for this is so that when I sand it back I will be left with no areas where there is no filler. That way I will end up with a fair and smoothly rounded join all around for the fibreglass to sit smoothly onto. This is important not only so the fibreglass has a good surface to bond to (fibreglass shouldn’t be bonded to sharp corners as it will form a weak point at the turn, rather it should have gentle curves which spreads out the load on it) but will also mean that the fibreglass sets fair so that less bog and sanding is needed later to get a smooth, shiny, nice looking boat.

Just one other small tip about getting the resin/hardener into the joins without it running everywhere, it seems more effective to run your brush over the join up and down so that each lip catches the brush forcing resin into the join. If you try going along the join first you get lots of runs down the panels. Then once the join is wet you can spread the resin inside the join by going along the join with your brush. Be sure to get the filler into the join whilst the resin is still wet or tacky. If it dries you don’t get a chemical bond. The idea of the resin wet-out is that it seeps into the pores of the balsa better, making a deeper stronger bond with it than just the thick filler which really only bonds with the surface, but when you lay filler onto the wet resin it chemically bonds. 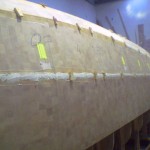 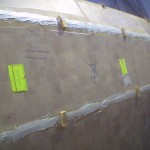 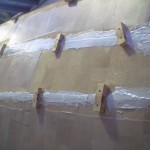 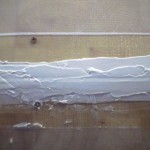 Tomorrow will be more of the same, as I have only managed about 15% of the filling in the first hull. I am sure I will get faster at it as I was on a bit of a learning curve today. Then I will remove the tabs and screws and fill in the areas behind them and all the holes, then do the same from the inside until the whole hull is filled ready for the glassing. I think this process could take a week or so.