After my mixed day yesterday, I only managed 4 hours today. I forgot to wear my knee brace so getting into and out of the hull about 10 times took its toll, and on top of that my thumb is quite sore from yesterdays fall and just to round it out to 3 my calves are a bit sore from climbing up and down the ladder all weekend. So 4 hours was enough for me today. Oh, and Carlton were playing Sydney so it was televised here from 3pm so almost live. That pretty much clinched it.

But I did manage to make some progress. The glass on the toilet enclosure had set enough for me to move it safely so I managed to get it glued coved and glassed into the hull. With the enclosure glassed in I can safely cut out the doorway into it, so I can glass it from the inside. I did a fairly good job on the cove and glass considering how tight the space is to work in and that I had to work left handed on one side. I had to work left handed to cove the side next to the outside hull. I would give my right arm to be ambidextrous (sorry!). I will cut the bulkhead door out tomorrow and start making the back and toilet rim level base. I can glue the the rim base in but I wont glue the back in until after the hull to deck turn on as I need to get inside to cove and glass it to the bulkheads. The toilet back can be glued in and only coved and glassed on the inside as it is not structural but the deck turn must be coved and glassed to the the bulkheads and the centre join glassed on the inside. I may even angle the back wall as you don’t need the room in the roof area, you only ever sit in there so don’t need the head room (no pun intended). 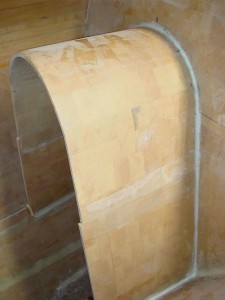 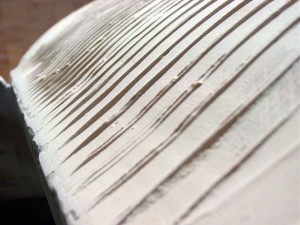 I have been asked why I am bothering to make the toilet enclosure and why I don’t just cut a doorway in the bulkhead and putting the toilet against the next bulkhead like a proper toilet room. I have 2 reasons. The space I am intruding into is ideally set aside for reserve buoyancy, but many builders put single bunks in and use up a lot of it. Everything is a compromise. So I want to use as little of this space as I can get. But perhaps more importantly, the extra duflex and glass weight is minimal compared to the effect of having the heavy ceramic toilet bowl another meter forward in the hulls. You need to keep weight out of the bows as much as possible. With this compromise idea the toilet bowl is only 500mm further forward (and anchored to the same bulkhead) than it was designed to be instead of 1500mm and against the next bulkhead.

After fitting the enclosure the fairing beckoned. I did about 20 minutes of it. I just wanted to get a start on it, I wont go at it until the whole front of the boat is on but the pic above perfectly illustrates how bog lines fair out when sanded the dips below on the panel surface. Where the dip is from the conduit cove you can see the now level tops of the beads (from being sanded level with a medium length torture board).

I made a little more progress on the catwalk. I need 150mm sides so I cut them out today and attached them to the catwalk base. There is a 30mm lip under the catwalk where a stiffening and supporting frame will be glassed on, probably ply on edge. Then the width of the base (15mm) uses up 45mm of the 150mm deep. The lid will sit inside the sides taking another 15mm leaving me 90mm inside. I figure a ladder to be about 70mm or so to sit inside the catwalk. Ignore the fact that the catwalk looks rectangular, that is distortion from the camera. The second picture shows its true shape.

I will glue foam to the sides and shape the sides to match the forebeam profile then glue the conduit to the point and glass it all. The front of the catwalk sides will be cut out to the forebeam profile shape and the back will be curved to match the foredeck shape and glued and glassed on. I haven’t decided yet whether to glass the catwalk in first and then to foredeck or the foredeck first and then the catwalk to it. I suspect the former is probably stronger, I am not sure.

I am hoping to have the other hull closed up next weekend. I will probably do a little more fairing. A bit at a time it doesn’t seem so bad.