After nearly a week the glue that I used as filler to fill the tiny bubbles in the glass and splinters inside the case I had had still not gone off due to the extremely cold weather. It just refused to kick off. I did them both at night but thought the shed would warm enough during the days for the glue to set off. I was worried that perhaps I had mixed it wrongly but on both sides on different nights? Anyway after a week it had finally hardened. If it had not hardened on its own I was going to hit it with a heat gun but it was sufficiently hard enough to sand, which I did, so it is now ready to apply copper epoxy. I am not going to bother with highbuild, I am just going to give it a coat of epoxy, let it tack off then apply the first of 2 coats of copper epoxy, all one after the other while it is green (when Nine Lives gets its copper epoxy).

I spent a lot of today (Saturday) cleaning up a bit, rearranging offcuts to stack a little more neatly and getting some of the dust out of the shed (by vacuuming and blowing it off vertical panels).

It is time to start on the internal furniture. I have decided to start from the bows and work back because in order to glue the soles down (which is needed in order to continue with the mast bases and any hull furniture) I need to plumb in any pipe work or electrical wiring. So before I can do any of that I need to know where the plumbing will need to start or finish. It is amazing where the hours go when all you are doing is measuring and cutting cardboard, remeasuring, re cutting more cardboard until you get the set up you like. It felt at the end of today that I had not really achieved anything. But I guess you have to get these things right and unless everything is pre-laid out (a kit) you have to go through these periods that feel unproductive but are in fact just part of the build. And a lot of fun. 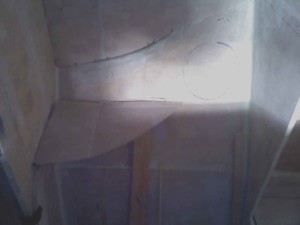 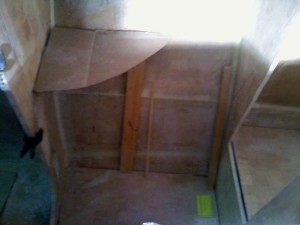 With the doors moved to the outside of the hulls by 150mm for the mast posts, the room in the ensuite changes. It isn’t any bigger but the new door actually makes better use of the space. You usually would not have any furniture against the outside hull in an ensuite so usually the door cuts the usable space for a vanity on the inside hull side, but the added 150mm means I can fit a deeper vanity top and because of the slope of the hull sides you don’t really lose any floor space. And you need to have the vanity cover at least some of the floor so you can run waste pipes down the inside of the vanity unit and under the sole to keep them all hidden. The water in pipes will come through the bulkhead inside furniture in the bedroom and also stay hidden.

With the vanity shape selected through trial and error of different shaped cardboard cut outs of quarter circle shapes some more elliptical and longer, one bigger to fill more of the ensuite and starting closer to the door until I settled on the shape I have. The ensuite is also a shower so you want to keep as much floor space as you can. I have freed up a little of the space by having the toilet inside a cubicle on the other side of the forward bulkhead so the showering space is very generous and does not feel cramped in anyway. I will also have a hatch through to the underside of the tramps as well as a port on the outside hull and a hatch above so plenty of ventilation which keeps the mouldy smell that some bathrooms can have, away. I will have a mirror fronted sliding door shaving cabinet in the panels that go into the forepeak. I was thinking of putting a black water tank into the space but have decided to put it into the space to the side of the toilet cubicle.

Which brings me to the forepeak filling walls. These are pretty much the last of the pre cut (kit) panels to go into the boat. I was thinking I would leave them off the boat all together in the port hull walk in wardrobe and use the space for more clothing, but with the masts moved inboard I feel they are more critical to add stiffening to this section of the build now so I will put them in and utilise the space in that void by accessing it from the bedroom via either a door or a large drawer on pot drawer runners. 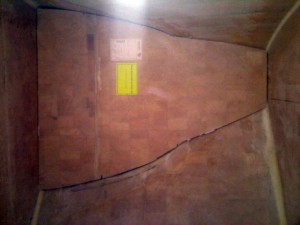