The Schionning Muster was fantastic!! We took a leap of faith when deciding to build a cat before ever having sailed on one. We had made our decision based solely on what it felt like to move around on one at a marina, in other words, in the same way someone would choose a house by visiting a display home to “imagine” what it would be like to live in. We figure that only about 10% of our time will be spent in actual sailing so in effect we are choosing a house more than a boat. Anyway, having inspected about 5 different boats at the marina and sailed on 3 different boats of varying lengths, we now know that we have made the right choice. We loved it and can’t thank Schionning’s and the owners of the boats that attended enough for the invaluable contribution they make to those that are contemplating building or have just started. And the motivation it provided to finish is incredible. We also got some great ideas of what works on other boats that we may apply to ours.

On Friday, we went on a leisurely sail on a 1030 Wilderness called Lots of Knots (thank you Goetz) with another 14 other people, so that is over a tonne (1000 kg’s) of human cargo, and we didn’t at any stage feel cramped for room. But what is more astonishing is that we hit 10 knots in 12-15 knots of breeze and consistently sailed at 8 knots with that many people on board and it wasn’t being pushed to get that speed, in fact if not for the onboard gauges and my hand held gps, I wouldn’t have believed we were doing that speed. To give you an idea of what it felt like to us, have you ever got into a new car for the first time (one more powerful) and glanced at the speedometer and thought, wow it doesn’t seem like we are going that fast. That is what it was like. There was a moment when Jo and I turned to each other at exactly the same time (it would be spooky but we do it all the time) and both said “we have made the right choice”.

On Saturday morning I crewed on “Le Tigre” a 1430 Cosmos. Now that is a fast cat. I say crew but I was more like ballast as I didn’t actually do anything but feel exhilarated for the 2 hours I was out on her, thanks Chris. No-one quite knew where the marks were so “racing” is a very loose term here. In the afternoon I crewed on “Lawrence 11” an 11mt Wilderness. Thanks to the owner Neville and to Bruce the skipper on the day. He taught me heaps. My job was on starboard mainsheet and traveller. I loved being a part of the action and learnt heaps.

They were all excellent cats and all easily made 10-12 knots with over 10 people on board. I have a benchmark that I would like to exceed on my boat. If I do we will have a fantastic boat and home. Thanks again to all the owners, we also got to see “Hooks” (our favourite) and “Cats Chorus” both Cosmos 1320’s, all the boats were extremely well finished and anyone would be proud to own any of them.

There is now only one test left and that is an ocean sail in heavyish weather, but I live by the motto, “what others can do, we can do”. 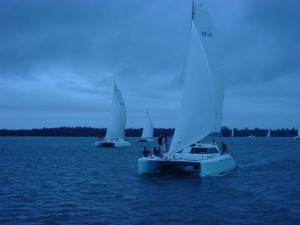 I glued together the first of the 25mm bulkhead panels today. It takes a little longer. The surface area to coat with glue is about 50% more so it stands to reason. But I found that on my own, and given the humidity, the thickened mix was getting tacky towards the end of 2 edges (1 panel) so I could only just coat 1 panel at a time before placing it and screwing it down, whereas on the 16mm I could do 2 easily. I will finish the 25mm tomorrow before starting on the 19mm bulkheads. (4 of the bulkheads span the entire boat and need to be stronger, the rest of the bulkheads only support one hull and are 19mm).