I only worked for about 5 hours today. I started at 10am and left at 3pm. Not much to report. Today I did glue all of the false floor bases into the boat so all I have to do is glue the floors themselves in. I want the floors glued in so that I can stand on them when I fit the forebeam, hopefully next weekend.

Today I also trimmed the forebeam to size. This took a little while as I had to re-measure and remark all of the centrelines, etc. I started by finding the centre. This was fairly easy, I used the anchor bridles as my guide and found the centre point between them (I measured them in fairly carefully so they should be a good guide). With centre marked on the beam I measured from outside hull panel (but on the inside of the hull) to outside hull panel, it measured 6560mm (the plans say it should be 6580, 5880 from hull centreline to hull centreline and then 350mm from hull centre to hull inside edge each side, so my boat might be 20mm narrow at the bows, or just my hulls are 10mm narrow each? But I was also measuring trying to replicate the bend in the beam so that may also account for the discrepancy) so I measured 3280mm either side of centre and marked that line on each side as the point where I need to cut the beam to size. I may actually need to trim a little more off as I have to put a 12mm ply pad against the hull sides to spread the loads through the beam onto the hull or if my measurement was out and the plans were correct then I wont need to trim the beam . On the starboard side I only just made it with about 25mm to spare. On the port side I had about 100mm to spare. Once the beam was trimmed to size you could not tell how close a call it was. 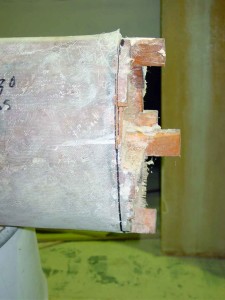 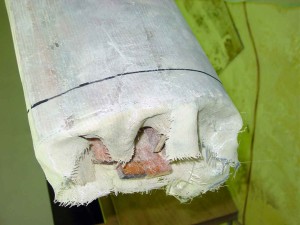 I have cut the beam to size but I forgot to take a photo of the cut ends. I started cutting using a hand saw but decided it would be easier to do with the jigsaw, which it was for the outside of the beam but then I needed to revert to the handsaw to cut the centre ply web. Now that I have the beam cut to length I still have to cut the slot in it along side the web that will slide over the bulkhead and the web provides a larger surface area to glue onto the beam, but remember the glue is not strong enough on its own, it is usually just to hold the parts in place until you glass it.

Tomorrow I should have the false floors glued in and the slots cut in the beam. Its getting exciting again.