Today Warren sanded the tapes on the dingy hull and we then gave the underside of the hull a coat of resin to seal it. We then cut the forward bulkhead, cut the slots in the hull for it and fitted it to the hull and glued it in. 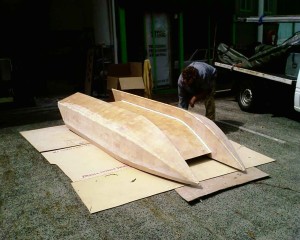 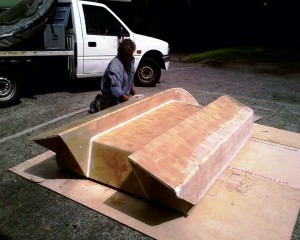 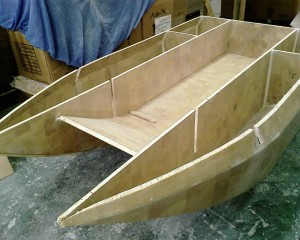 The resin coat was applied by pouring resin onto the hull and sqeegeeing it over the hull. We decided to do it outside in the sun so that it would dry faster so that we could get more work done. We gave the work area a bit of a clean up while we waited for the resin to tack off a bit and we then turned the hull over and lay it on the milk crates and started on the bulkhead.

The slot for the forward bulkhead was cut into the hull sides and we also stuck a problem which in hindsight was obvious but we didn’t realize it at the time. Because of the additional chine in the boat the forward bulkhead would not be able to slot in from above as we attached the rear bulkhead because the chine makes the top of the hull narrower than the middle. So the solution was that we would need to cut the slot into the chine also. Easy.

Once the bulkhead was trimmed to the correct size we glued it in and glassed over the slot we cut into the side and left it to dry over night. 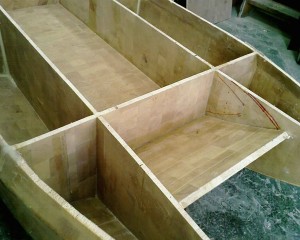 With the forward beam in the dingy the internal space is set. On my dingy (the next one) we might put the beam a little further back. That will make the passenger space and side compartments a little smaller but will allow for a slightly larger anchor locker. Every decision is a compromise in some area.

Tomorrow we will cove and glass the internal joins and generally seal the internals of the boat. We should also get the covers (hull tops and forward compartment) made but we may not attach them. On Sunday we may get to put her in the water for a test run. Another 4 hours each today for a total so far of 24 for Warren and 30 for me although Warren worked for an hour or so while I was busy answering emails for work so lets call it 29 for me.