The rear steps are proving difficult for me to design. I just cant get my head around how they will work yet. So rather than let them slow me down, I have decided to try to work from what I know I want and work backwards. I will start with the duckboard. I have already decided that I want a raised duckboard, raised to the level of the seat top so that the walk through is at seat top height and all I am walking through it the seat back. Then under the duckboard will be a series of lockers, the middle one about 1500mm wide so that I can use it to store long items like boat hooks, gaffs, fishing rods etc. Alongside the long middle hatch will be 2 smaller ones for storing LPG bottles. Then the duckboard will be stepped down by 2 250mm steps down to the original duckboard level, then the hull transom steps will start from that level.

I have also decided that the back wall of the duckboard sides will be slanted slightly which will give me a slightly wider duckboard. And after much internal debate I have finally decided on davits rather than a targa bar. I experimented with a number of styles, straight angles but in the end I decided as I did on the cabin side extension that I prefer curves to straight lines. I tried a couple of different curves but in the end settled on an elliptical curve. Also on the advise of a friend Dennis, I tapered the end.

I decided on the shape by making a number of mdf templates until I had the shape I wanted. I then transferred it to a piece of duflex and cut it out. When I selected a piece of duflex I found a piece that already had a curved edge to it, I think it was part of the walk through transom kit. Anyway the curve was very close to the shape I had already decided on, not exact but close enough. So I went with the curve it had and it was even better than the shape I had. I cut it out and then tapered it to the final shape I wanted then used it to trace 3 more pieces the same shape and size. These will form the sides of the davits. I will make a box section out of the sides and 4 pieces for the front and backs on each one. The fronts will extend in a reverse curve to square to the upright so that it becomes a flat extension to glass onto the bridgedeck, inside the duckboard hatches. The front will have a uni stack inside it for strength and the top of the davit will have a block and then another about a third of the way down where the dingy raising rope will come out of the front for uphaul and to be cleated off, making it much easier to raise and lower the dingy from the cockpit rather than leaning out to the ends of the davits. 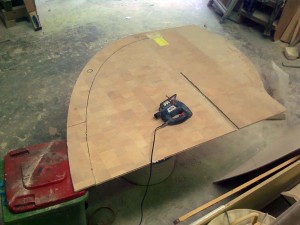 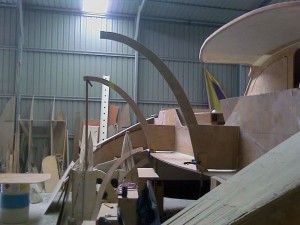 I am just cutting all the various parts for the davits and duckboards and will start to glue and glass it all together once I have dry fitted it all and it all fits the way I had intended or at least works and looks the way I intended, because I am making this part up as I go here. Most people would have a firm idea of the final look and function they want then draw up plans before proceeding to produce it, I cant visualise what it will look like yet, let alone draw it, so I am finding it better to just start on it and let it form as I go. It is slow going as I cut various templates to arrive at the look I finally settle on but so far it seems to be working out, and it worked for me when I designed and made the cockpit without a drawn up plan.

I would have liked to have got another 20 hours work this month but last weekend was Jo’s birthday and my parents were visiting for the weekend so I could not get any work done. Friday afternoon we went to the airport to collect them, on Saturday Jo had a small fancy dress birthday party and I spent most of the day organising for it. It was a lot of fun, Jo had a ball as I am sure all of the guests did and that pleased me much more than missing work on the boat. On Sunday Jo and I took my parents out for lunch and sight seeing so again no work. And on Monday I left for a business trip to Melbourne for 3 days. So considering all of that time lost, 59 hours was not so bad.