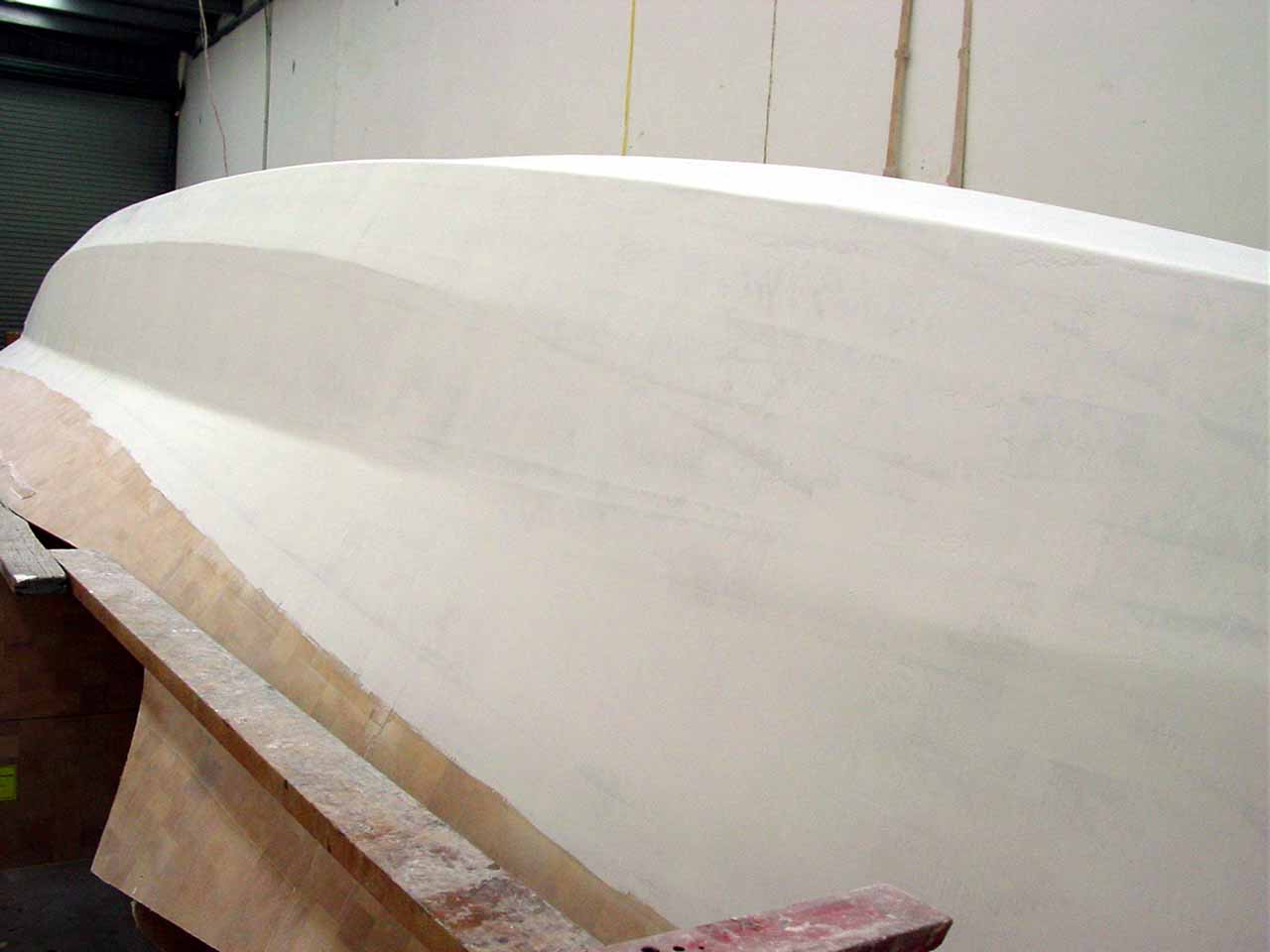 Pretty soon, the rear steps will go in and before they do I need to have the davits glassed in. The rear steps are currently held up waiting for the rudder bearings.

So I cant put off finishing the davits any longer. They cant be properly glassed in if the rear steps are already in so they will go in before the rear steps and seeing as how I cant hang the rudders until I have the bearings it is a good diversionary job to keep me busy while I wait for them. (I first made the davits in 09! http://www.mahnamahna.com.au/March%202009.html).

Not that I was deliberately not doing them, like many of the jobs in the pending list I have done a little here and a little there but not fully committed for one reason or another, usually because I either had higher priorities or no motivation.

The reason in this case is that hanging out the back of the boat like they do, they are going to have to be faired before they go in, as much as they can be anyway. And to properly fair them I am going to have to buy some high build. Heres the thing. High build is expensive enough when bought in bulk, and I am going to need major bulk soon. But even more expensive when bought in little quantities, so I have been holding off in the hope I would figure out how I would buy the bulk I would soon need.

In the meantime, I have also been trying to make up my mind whether to have an open back, closed back or removable back. I have to send a straight line in the form of a rope in tension around a curved davit. How I do that is to have it exit a large sheave close to the back of the davit, in a straight line to a turning point inside the davit, in the form of an aluminium pipe inside the davit mounted in ply pads either side, with a hole cut out for the pipe so it can rotate like a block. It cant hold the line like a groove in a block but it does minimise friction. And from there to the sheaves that will be mounted in the end of the davit.

The design brief was formulated when I almost fell overboard when on a friends boat and I had to lean out to reach his dingy davit line. I thought, I am just clumsy enough to fall off, so I should design something that helps keep me in the boat. So having the line come out of the front of the davit rather than hanging down behind it, or even tied to the side means I can keep a firm footing on the boat when raising the dingy. To assist in that I will have 2 sheaves on the axle at the end of the davit and an anchor point, the line will exit the davit over one sheave and down to the first of 2 sheaves on the bottom block, back up to the second sheave of the davit, back down to the second sheave on the bottom block and back up to the anchor point on the under side, but just in front of the end of the davit. This will give me a 4 to 1 purchase and given that the dingy and outboard should weight less than 100kg/s I should be able to lift the dingy by pulling a little at a time on each of the lines on each davit and tying off or through a spring loaded cleat. I could probably even lift both ends by standing between them and pulling on both at the same time, but I will experiment with that once I have them installed and working.

The reason I have been torn on how to finish the davits, that is, back on, back off, back can come off but is on, is because if the line is ever broken (or cut) I have to rethread it over the aluminium pipe and around the bottom sheave from 4 feet off the back of the boat! And it would be near impossible to do with the back fully enclosed. I just couldn’t figure a way onto the bottom sheave without being able to get at the sheave from behind. Back glassed on adds significantly to the strength of the davit. There are about 12 layers of uni either side of the davit front/top and the sides have about 5 layers each so it already has enough strength without the back/bottom. But the back looks better, and is stronger.

In the end I decided on a back all the way to just above the bottom sheave and a removable small door to allow access to the sheave. Then a line can be fed into the end of the davit on flexible sail batten (I am using the yellow tongue of chipboard in the shed) that will keep it pushed against the top of the davit which will guide it over the aluminium pipe and then down to the sheave. Once it reaches the open back of the davit I hold the line and remove the batten by either pulling it all the way through or pulling it back out the top. I can then easily mount it over the sheave and close it back up again.

So I finally glued and glassed those backs on last weekend, after cleaning up the insides and giving them a coat of thick white epoxy. Before I did that I decored the edge all the way around from top to bottom and embedded a uni role in the edge. All up if these davits are to bend or break about 15 layers of 457gm uni has to stretch or contract. I am very confident they are one of the strongest parts of the boat (almost as strong as the beam I put in to the back of each dagger case to ensure that if I hit something with a dagger down it could not tear a hole in the boat). Not sure why I made them so so strong. Not sure they need it. I glassed the backs on with 2 layers of uni, one across the back one along the length of the back and a layer of double bias to hold it all in. And I bogged the glass wet on wet ready for the first of many fairing sands.

First up it does not look too bad. I have some low spots to fill but it is starting to look ok. 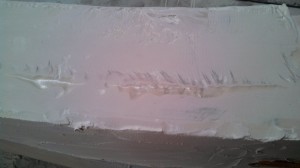 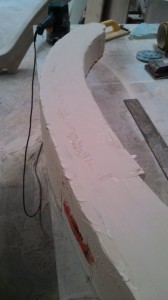 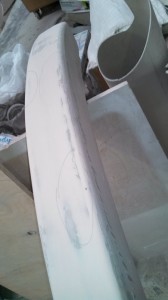 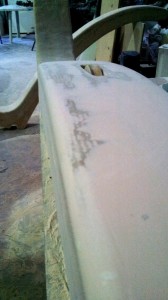 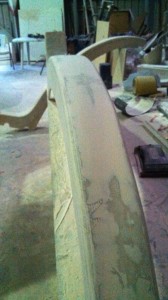 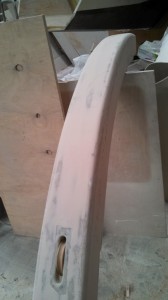 The next davit post will be when I glass them into the boat. I will be using a fair bit of glass to anchor these things. No point making them strong if I dont use the same amount of strength attaching them. I would have shown pics of the top sheaves, which will be hung on a 8mm stainless steel pin with either a thread each end of just a cotter pin drilled, but I bought the wrong size sheaves, thankfully the supplier has allowed me to return them for a credit and the correct ones shipped out to me, should have them later this week. 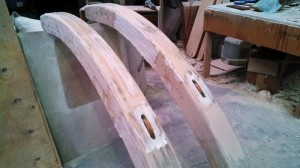 Second bog pass, no doubt there will be another once I have sanded this again. The big filler patch in the centre of the right hand davit is the only real low spot on either of them. The rest are pin holes or isolated low spots the size of a coin or longer thin lines that look like the one in the second from top pic above. Perhaps after this sand I will apply a guide coat to see if it is fair enough and then the highbuild coat. If they are fair enough for highbuild I may sand the first high build coat then give them another but not sand the final coat, waiting until after they are glassed in for final sand. Not sure. No doubt after glassing in, the glass to secure them will need to be fair out. That is why they are only faired 3/4 of the way down so far.