….nothing but trouble. Oh, typo my bad, that’s damn hose. Using a 10 litre pressure pot with a gun on the end of 3 meter hoses, the boat has been sprayed in its now final (absolutely positively final) coat of highbuild and a quarter way through the paint feed spray hose blocked. After cleaning the gun (thinking that was the problem), and thinning the mix down a bit, (thinking that was suddenly the problem when the first pale wasn’t), we finally realised that somehow the hose was blocked. Turned out the hose was partially blocked with old paint and we tipped it over to fully blocked. A new hose later, thanks Terry, and we were back in business. Only lost an hour, and the sixteen bucks for the replacement hose.

And because of the post title, its a good time to tell you that no, I am not a fan of Christmas. I am an atheist. I like the holidays, and would still want them every year, just minus the religious mumbo jumbo and the rampant consumerism and gift giving con. For those of you that still believe in Santa, sorry to burst your bubble but he was invented by Coca Cola. You don’t get much more capitalist pig than Coke! And if I hear another carol over the shopping centre pipe machine I may just go postal. I know….where else are washed up muso’s and day time tv hosts going to get singing gigs. And has anyone written a new carol since 1955? Bah humbug.

I could not be happier right now though. Well I guess I could be in a few months with a boat floating in front of my house. But its so close now I can start to enjoy it. Hmmm, enjoy is an interesting way to describe it though. The heat is so oppressive in the shed at the moment that just hand rolling the last of the unpainted sections causes my shirt to soak (I mean I can wring liquid from it, no exaggeration) in sweat. Its constantly 40 degrees C, inside. Besides being extremely uncomfortable it also leads to much less work being able to be done.

The timeline as it stands is to have this layer of highbuild sanded with the air orbital with 320grit to key it within 2 weeks, weather permitting, and being extremely careful not to sand through this layer. Its now 2 layers thick everywhere except where I sanded through last time and I gave those areas a thicker coat. I understand that I sanded through because these were highs and I would probably have been better served not making the highs higher with a thicker coating there but I am no longer trying to get the surface faired. So as long as I just use the 150mm round orbital and just key the surface I don’t think I should sand through.

The highbuild besides making the boat look great, it also shows up any flaws. I had a few areas of poorly finished coves and corners, especially around the sheeting outcrops. I knew some of them were there but I also discovered a few I didn’t. They will be fixed because that will get in the way of the paint creating a full seal of the build. Some I just no longer care about, and some will be able to be filled with auto filler that sets in minutes to sand-able as I go with the sanding. Its also usually a bright color that will show up well on the stark white background. I started to run out of highbuild, I had recoated the roof even though I had not sanded through anywhere and even though most of the roof will either be under solar panels or non slip so in retrospect I regret wasting paint on it that would have been better used on the hulls. Its done now and everywhere other than the underside of the cockpit cabin roof is now covered. I will hand paint that next week. (The cockpit floor and seat tops, some of which are also hatch lids did not get highbuild either as they will be covered with cork but I may give them a resin coat to be sure of the seal beforehand). Other than the oppressive heat stopping me, I am fairly confident I can knock this highbuild and sand over in 2 more weeks.

Then I start clearing the shed ready for my brother to spray the topcoat on. In the meantime I also have to glue and glass the stanchions in, and the lifting block plate for the daggers. But other than that I don’t plan on anything else before painting. After painting I have mechanical fitting to do, including fitting the hydraulic steering, the outboards including glassing in a ply table for the lifting winches and a battery box for the outboard starter battery which will sit inside the starboard engine bay. Then the next big job will be having windows made and fitted.

Today I hand painted the stanchions in 2 pack black (with a brush). They may need to be sanded again and a second coat applied before Terry and I glue them in next week. I will mask the paint so that the boat can be sprayed around them. I may also still add 2 last ply pads to the decks between the deck turn block under the sheeting points and the winches (for a sheet cam cleat or V cleat, not sure which yet). I have also fitted pads for the self tacking jib tracks in front of where the masts will one day be stepped. (the fairing in of these pads were a little rushed which the highbuild showed up. I will fix that as I sand the boat. I have an idea about how I will finish the stanchion glue in on the decks, I will make a mold, but more on that when I have done it.

For now, here is what the boat looks like now. 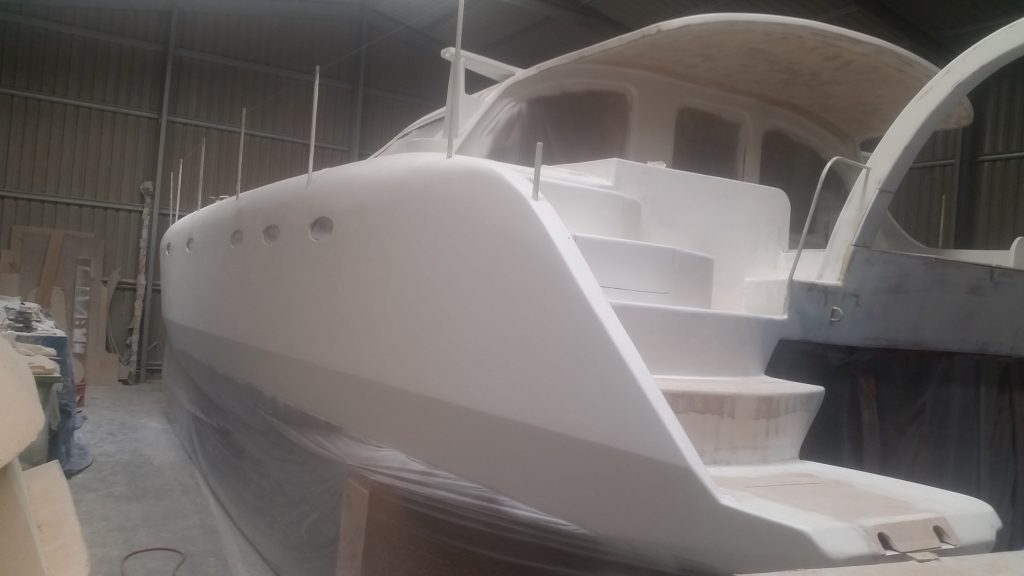 Unfortunately the lighting on the starboard side is poor so it doesn’t look in photos the way the port side does, but with your own eyes it does. In fact it may be the better side. I am very pleased with the chines. They are sharp and pretty straight. Here and there I have some flaws but only if you look really closely. It is interesting though to follow the shadows formed by the lighting in the shed to see if I have made the curves of the hull and deck faired well. I mostly have except for a section on the port bow and the starboard stern. But its now been done and it is what it is. I saw another similar cat last week and I felt I have done as good a job as they had and they seemed to be enjoying their boat. So perhaps I need to let this go now and except it for what it is.

Today I cut the stanchions to size, each one is 660mm above deck height tall. I would have liked 700mm but was restricted by the shortest one I made, which is long enough for 660 above deck and only 200mm below deck glassed to a bulkhead. Should still be enough and I didn’t dare crib up my extra 40mm, so 660 it is. The rest have between 250mm and 300mm below deck to glue and glass on and of course all are the same height above deck. (the curve of the hull side means some are as much as 60mm above where they exit the hull side some as little as 20mm so I measured the 660mm from the height of the actual flat deck by using a flat ruler run across the deck to the stanchion and measured from the top face of that for each one).

Hanging under my scaffold is over $1200 of stanchions. I decided long ago to make my own because of the curve of the deck to hull sides. If I mounted the stanchions on the flat of the deck I lost too much deck so I want to mount them on the curve. Because of the lost height a normal 600mm stanchion was too short. A normal stanchion costs about AU$40 plus about AU$25 for the base. But the next size up has only one manufacturer and they want $100 each. That’s a whopping 250% increase for an extra 100mm of stainless tube. Outrageous. I made each stanchion out of solid uni glass for $25 each, a saving of over a grand. Nothing to leak or rust either. And each took less than an hour each to make. And to finish on my constant need to save, I made up more black paint than I needed, having never used the stuff before (2 pack polyurethane) to brush paint the stanchions black and hate just letting it set in the pot so I painted the under side of my swim ladder lid and the cavity it sits in. I still threw out about 200ml of paint worth about $5. I just couldn’t find anywhere else to paint it onto that was prepped (keyed or cleaned of dust) for paint. I admonished myself and then advised myself to let it go. Life doesn’t get much better for a soon to be boat owner. My wife Jo and I are finally starting to get exited about what it will be like. I enjoyed 2016 (all except the disaster US election) we managed to tick off a few of our wish list. 2017 surely holds in store a goal that has been dreamt about for well over a decade.

Hang in with me, not long now. Next post should be top coat if we get a weather window of sub 30 degree days in a row. We have to be fairly confident though because my brother needs to come from interstate and I don’t want him coming up to not be able to complete the job.

In the meantime, besides cleaning up the shed which in itself is a major job, I will complete a number of smaller projects when I can and get as ready as I can be for painting. Happy new year.