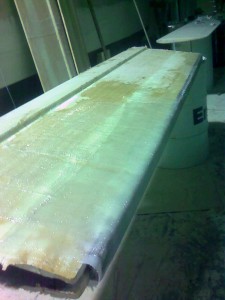 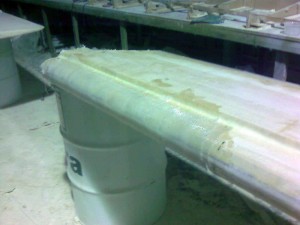 My thinking with the uni is that the most uni would be needed low on the trailing edge and less uni needed on the front edge and only needed higher up to help stop the back from opening up by stoping the dagger from being able to move forward in a rotating motion. The bulk of any pressure on the case would come in the bottom half at the trailing edge so now that I have strengthened the case I will also build a web into the sole to stop the case itself from moving in the boat if subjected to a massive hit from the dagger hitting something.

You don’t ever hear of daggers ripping cat hulls open and it is probably because of the small likelihood of hitting something hard enough to do that much damage but I don’t want to be an exception. I now have some piece of mind. And it only cost me some resin and some uni offcuts (from the dagger layup), about 2 hours work (each case, I have yet to do the other one) and will weigh about 5 kilos (I am adding in the likely weight of the additional web) each hull.

I just have to run some resin inside the case on the front and back joins and the case will be ready to fit into the boat.