Another 2 day Melbourne trip on Tuesday and Wednesday meant little work done during the week. The work I did get done last night was to clean up the glassing of the inside of the davits and to rout the outside and sand it ready for glass on the outside. This took a couple of hours.

Today I spent the entire day transferring the shapes from the mdf steps to duflex. When I made the mdf shapes I was not too careful of the exact curves and cutting carefully to shape, I just wanted to get an idea of size, shape and placement. But now that I am transferring to the actual duflex I have to clean up the shapes to the proper curves and be careful cutting them to exact shape and size. I also am down the the very last of the offcuts and parts not used in the build meant for the walkthrough transoms so I have to be careful to nest the parts well to have the minimum of offcuts as I cant afford to waste any material. The good news is that once the steps are made, I have finished the external build so wont need any offcuts for any other parts of the build, with the exception of some internal parts such as some framing for the bedrooms and under the rear bunk to hold it up and leave a usable space below.

Because of the more careful cutting and nesting it took most of the day to get the first steps made. I am now cutting both sides together then I will put them together one at a time once all the parts are cut. Both sides are identical mirror image of each other so I just have to cut 2 of every shape then the other side just turn the part over and it is the mirror of the other side. I decided to make the biggest step first. The biggest step is the one that is the transition step from the transom to the duckboard. It curves one way then the other. I have nearly a full sheet of 19mm duflex but I did not have a piece of duflex big enough to get 2 out. I could have got 1 out in 1 piece but then would not have the material left for a second, but I could join parts to get both sides out of less than half the sheet I have as I can get the parts out of the sheet ends rather than down the middle. So once I had the parts cut for the first step I joined them by gluing and glassing them together. 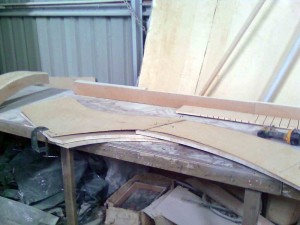 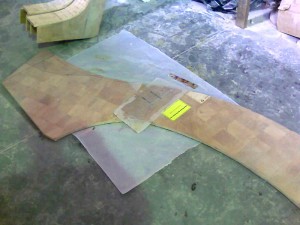 I then started cutting the step below it, which is down in the hull on each side at the height of the top of the last bulkhead (8) in each hull, the bulkhead that the rudder is hung off. I am making the steps slightly oversize so that I can run the step risers in about 20mm from each edge so that I have a small overhang on each step and still have 300mm deep treads. The overhang is so that I can rout in a groove for led rope lights that I plan to use to illuminate the steps at night. They have 3 purposes, besides the obvious illumination so you can see the steps at night, I plan on using blue LEDs so as to be a bit different so that on a moonless dark night in a crowded anchorage in pitch black my boat will stand out for miles and be easier to find in the dingy and finally blue lights should look awesome.

Tomorrow I should get the rest of the treads cut and start on the risers too. The risers are much easier, each is the same 250mm parallel and just need to be cut to length. Then once I have all the parts I can start on the dry fit.

I also have a couple of new ideas that I will be working on and both are in the sterns and revolve around the steps or the cavities below the steps. The only reason I bring them up now rather than when I get to them is in case anyone ahead of me is thinking about these areas. The first will start as soon as the steps are finished. I have for a long time wondered how I would be able to get a swim ladder into the bottom step considering there would need to be a slot in the middle of the rear step for the kick up rudder. I have considered having a fixed rudder but I like the idea of being able to raise the rudder to beach or in very shallow water to reduce the draught. I also looked at a sliding rudder set up similar to a raising daggerboard but in the end Greg, a shipwright friend suggested that a wide rudder box would fix a number of issues with the kick up rudders and also be wide enough to house a slide out swim ladder. I have long worried about an aspect of the kick up rudders. The way they are now, with a narrow slot for the rudder box and rudder to kick up through, it occurred to me that if you saw whatever you are likely to hit with the rudder just before you hit it, the natural reaction would be to try to avoid it by steering the boat around it (submerged bommie, container, log etc), but with the rudder off dead centre it cannot kick up, or if it does it may damage the transom. But with a wide slot and box the rudder can kick up even when turned hard. In fact the shape of the box can be a wedge (triangular) starting narrow at the rudder shaft and widening as it goes aft. This may in fact be the shape I settle on.

The second idea is how to close off the outboard leg through hull. Readers might remember that I raised the height of the transom bulkhead so that I had more room inside the hulls under the steps to raise the outboard clear of the hull bottom so that I could have a trap door hinged from inside the cavity to close the hole off instead of the design of having a plate hung off the outboard skeg that raises up from below to close the hole. My issue with the original idea is that the plate on the bottom of the outboard must add considerable drag when under power. Anyway, even with the raised bulkhead it is still very tight for height inside the cavity under the steps. Then an idea was suggested. Why not make a roll top type flexible door that could be run in a track (aluminium) glued into the de-cored hull keel panel that the rollerdoor could slot into. Better yet I could get some acetyl or similar (but not nylon as it swells with water) board (they make chopping boards from it) and cut kerf in it rather than slot made into a rollerdoor. That way the underside would remain fairly smooth and the kerfs should be enough to get it along a slot set on an angled approach. This idea is not only much easier to make, it takes up less height and is much easier to control its movement with pulleys to act in the correct direction as the motor is lowered or raised. They can work in unison so that as soon as you start to lower the motor the door is sliding open and visa versa.

It is great how problems get solved by talking to as many people as you can about them, sooner of later the right person will have the right answer.