Despite a good burst while I was strip planking the bows, I have been in a bit of a funk for the last month or so. Part of this is the heat of Summer that makes working in this new shed unpleasant, it is far hotter for a given temperature than the old shed. Anyway, as part of that lack of motivation, I have also been feeling guilty at the lack of progress. Having said that, I did spend a lot of time, setting out and planning so it wasn’t a total waste of time. This setting out was important as I am setting out the cockpit furniture myself and cutting it from other bits (the walk through parts) and this not only takes a lot of time it is also critical. For example, you would want the cockpit to be a symmetrical as possible and centred, so if I am setting out the cockpit seating a particular position on the port side, and bearing in mind that the cockpit set out outside affects that hull on the inside, so I had to be sure that if I set it out at that point on the starboard side the internal fit out would still work. So after all that checking I am finally confident that I know what I want.

So, despite the heat I finally got started on the cockpit furniture today. I glued the first 2 seat spacers in, and set them out wide enough to fit 2 24 litre outboard petrol tanks in. I glued, coved and glassed them in. I also ran a glass tape along the butt join of the top half of the bulkhead to the bottom half before I glued the seat parts in. I am a little rusty at coving so the first one I did is a little messy, fortunately it would only be visible inside the hatch, no big deal and once painted probably not noticeable. At the end of the day, I started to feel angry at myself at wasting so much time over the past few weeks. Setting out and gluing the cockpit parts in reminded me of how much fun this boat building can be when there is something tangible to work on. One other thing I thought of, despite it being fun and satisfying to make a part of the boat from scratch without a kit, it is a lot more time consuming, so if you can get a kit made of what you want, it will save you a lot of setting out and fabrication and in turn a lot of time. The downside is you may not get exactly what you want and you may not have a truly unique boat, so others may have the same layout. 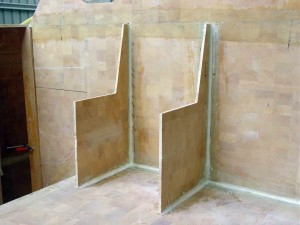 I have cut down the height of the seat top so that it is level from the deck across the top under the window. So the seat backs will also have to be cut down when I curve it around (this part is pre-cut for the walkthrough but I will use it to save having to work out the angles) and glue it in. The seat front (and the recline angle) and seat itself will be as per the walkthrough in terms of height and depth but will continue along and then bend around at the same curve rate at the back as the front along the rear bulkhead to form a full width slightly curved rear seat. I will make the centre of the rear seat a little deeper and have a little more recline (along its full length so it doesn’t change angle along its length) so it will be a more comfortable seat than normal.

I have decided that I don’t need the space internally where the cockpit seating is set out, so I have placed the seats as wide as I can to make the cockpit as wide as it can be. The bottom of the seat is out as far as it can be (which is also where the standard walkthrough would have them) and forms a vertical wall in the shower, then 500mm higher it cuts in as the seat itself cuts in, by 400mm then rises again as the seat back rises but slightly angled because of the seat recline. From inside the shower I will put a wall down to cover the chamfer from the angle of the seat to back turn down. I can use this as a cupboard inside or a hatch from the outside under the seat. I have decided that yet. But if I put the seat at the same position on the starboard side I needed to be sure that the internal implications on the rear bunk worked and it does, I can fit a double mattress in there and have 200mm to spare. Again the wall will rise from the top of the chamfer, vertically then come in 400mm then rise again to the ceiling of the bunk (the side deck), and again I can use the space under the seats either as bunk lockers or under seat hatches. Again I will decide on that once I have it all glassing in. The set out above right pic shows the shapes I have just described and illustrates the importance of setting things out to get a better idea of how they work.

Further set out working out was how I would helm the boat and how I would set out the cockpit roof so that I could see effectively from the helm. On the port side I will be able to stand on the seat and see over the cabin top, Jo will be able to stand on the edge of the breakfast table that will go into that side, to see over the cabin top. At the helm on the Starboard side there will be a raised helm position with a seat that can be stood on for all corner vision (for me) or sat on to see just over the cabin top or if I look down slightly I will be able to see through the saloon windows. I was contemplating a raised cockpit floor and double level roof or even a soft bimini but in the end I decided on scallops in the cabin top (or a sliding hatch (still to decide). It was important that I set out or even finish the cockpit seating before I started on the cabin top because the rear seat line will be mirrored by the cockpit roof so that you can stand on the seats and hold onto the cockpit roof and see over it. Everything has implications somewhere else so be sure and set it all out and try to think of everything before you build it.

There was more progress on Nine Lives over the last week. The boys should be ready to start fairing the outside soon.

Next weekend I will try to get the seat front on as far as I can, including around the corners and along the back of the boat. I hope it is a bit cooler next month because I need to make up for the pitiful 34 hours I have put in this month.