I had a mixed day today. I didn’t get as much done on what I set out to do but I did get started on the catwalk, which was to come next. Impatience got the better of me and caused me a minor setback as a result. I fell as I was getting down off a 44 gallon drum causing me to bang my thumb and a dilemma over what I wanted caused me another delay.

So the details. I got to the shed and as I anticipated, the bog has not fully hardened so no sanding today! A good start so far. Then I decided I wanted to see how the toilet enclosure would fit. I have glued the sides to the curved top (I made them out of separate pieces rather than one long piece because I need to glass the kerfs anyway and by using smaller panels rather than cutting up a full sheet to make a single length I used off cuts). but I have not yet glassed it. So moving it was risky enough but cajoling it into place inside the hull was asking for trouble. As I squeezed it into the correct place I heard a crack and knew instantly what it was, one of the glue joins had cracked. I took the picture then took it out and glued it back together. In the afternoon, while the glue was still green I carefully glassed it so that tomorrow or Monday I can re position it in the hull and glue it in. Then I can cove and glass it. 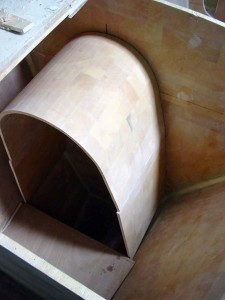 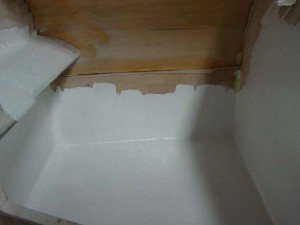 After I glued the toilet enclosure back together I painted the inside of the bow locker while it set. Then I had lunch.

After lunch I was at a bit of a loose end because I had planned to be gluing the toilet in. And then it occurred to me. I could start on the catwalk. And that was the start of a fun afternoon. But first I had the dilemma to get past. And it cost me nearly an hour. The boat is a long time built, so you want to make it how you want it now rather than re make it later. The forebeam and the foredeck run exactly parallel to each other but bows taper so the tramps are angled from the 2 parallels one each side of the boat. So the dilemma was whether to have the catwalk run exactly square to the foredeck/forebeam or to be angled at all. This decision took almost an hour. I tried a number of options using offcuts to try to visualise it finished. In the end I decided on a slight taper from foredeck to forebeam. 800mm wide at the foredeck 600mm at the forebeam. The angle does not match the angle on the hulls but to match that angle the catwalk would have to start at about 2 meters wide!

The catwalk does not need to taper, in fact it would be easier if it didn’t. I have some plans for the catwalk that would make it much easier if it did not taper. But in the end this is what looked and worked the best for me. The anchor locker is 800mm wide so the catwalk starts at that size. And 600mm is about what I need at the front. The Bi Rig has unstayed masts, so I don’t have a forestay in the middle of the forebeam or the striker that would counter balance it. The front is totally open. So my plan is to have a lid on the catwalk and under it will be a ladder hinged on the front of the forebeam that will lift out of the catwalk and swing over the forebeam onto the beach or into the water below. Under the ladder will be a panel also hinged to the same axle on the front of the forebeam that can swing over into the ladder to create a gang plank that can swing up to or down to any jetty if ever I nose into a berth. Being hinged it raises and lowers with the tide. I will make a box inside the tapering catwalk 600mm wide down the entire length and will figure out what to do with the 100mm each side at the foredeck. Alongside the ladder box will be a 100mm wide box (a half rectangle down pipe like those I used as the bridgedeck stiffeners) as the anchor chain hawse pipe open at the top when the catwalk lid is open (although I may split the lid so that the hawse pipe can be open with the catwalk lid shut) with holes in the bottom of it so that I can spray the chain with a salt water high pressure hose if the chain is covered in mud.

So with the catwalk size set I started to make it. I cut out the base 800mm at one end, 600mm at the other 2400mm long (the length of a sheet of duflex) and put it in place. The sides will be about 120mm but the box for the ladder only needs to be 70mm deep. I will shape the outsides of the catwalk with foam to mirror the forebeam profile so that it all matches. The conduit will be formed into the foam and all glassed down.

I got an anchor out (I have them lying around!) and set it on the end of my new catwalk. I need to be sure that I can still swing the ladder over the beam with the anchor up. I will be able to push the anchor over to one side (I have one that hinges at the front) to make room for the ladder so it should all work. I still have some details to work out with how it will all hinge, bow roller etc and how to fix it to the beam. Whilst measuring and setting out the catwalk I fell off a 20 litre drum I was using as a step up onto a 44 gallon drum. As I was stepping down from the 44 to the 20litre it moved and I fell banging my thumb against the 44 as I slipped. It slowed me down for the rest of the afternoon and I always feel a bit sore at the end of a day working on the boat especially days of up and down stepping but after a fall I feel all of my age! These things happen, and so far I have fallen about 3 times and hit my head under the bridgedeck about 10 times. I have also been quite lucky that I have not had any serious injuries. I do however have to have my other knee operated on soon.

A couple of things I have been meaning to mention for a while. If you notice some of the photos have blotches on them. This is quite common in boatbuilding photos and is dust illuminated by the flash, shots without flash don’t show the dust in the air but it is there, it is always there. The other thing I wanted to mention is regarding the post earlier this month on taping. Schionning’s recommend the thicker tape first then the narrow tape, but the boat builders in the shed told me this is not what they were taught at Warren’s. After trying both methods and after some discussion with other amateur builders I understand the reasons for both methods. It is very difficult to not get air bubbles here and there along the edges of the narrower tape and the other reason is that it is also very easy to sand through the top tape when it has a tape edge under it when fairing. A pro might not encounter these issues but us one timers do and it is better to err on the side of safety as most of the structural strength of the boat relies on those tapes. So I will decide on a case by case basis which way I will tape, the ones inside compartments that wont ever be faired I will tape the new way, the others I will tape the old way.

Tomorrow I should get to the toilet enclosure and glue that in. I will also make the sides of my catwalk and maybe even start on the fairing although, and I am not saying this just to put off the fairing, but it would probably be better to fair once all of the front sections are glued down.