At the boat show yesterday I saw some things that I will be buying in the very near future. I am going for a Lavac manual and electric vacuum toilet for the ensuite (and may even use it on the main toilet). You put the manual pump in line with the electric pump so the waste passes through one pump to the other or past the other depending on which is used, to the holding tank. I ordered one and should receive it next week. I also saw a 12v/240v 10 litre water heater that can heat water to 75 degrees in about half an hour, so about 4 to one mix for a shower which would make 40 litres, plenty for a few showers, although we would probably set the thermostat to around 55 degrees so that you cannot burn yourself. I was going to fit a gas continuous heater but I am always concerned with both the safety of gas and being reliant on filling gas bottles. We will of course have gas cooking but without the drain from a water heater a gas bottle should last much longer.

I also got more inspiration from being on finished cats, the stand out was a Fusion 40 which also highlighted that foam backed vinyl is the way to go to finish the interior. I have also pretty much decided on the panels I will build the furniture out of. There are a number of good options, Schionning recommend ATL Featherlite which is a cardboard honeycomb core sandwich panel. I am not using it only because it is more expensive. I was also considering Multi panel which is a foam core, that needs to be glassed each side to make up a sandwich panel but again whilst this material is excellent and used on many Fusions, I have decided on Nidaplast from Boatcraft Pacific. This is a polypropylene honeycomb core panel that also comes un-glassed but I have worked out that after factoring in the cost of glass and resin these panel are about half the price. I just have to be careful when glassing that I keep the resin content down. The advantage for me is that I wont have to kerf to make curves, I mold it than glass it to shape and the end panel is light and strong. The core can be cut with just a Stanley knife and the core cannot rot. (I had also considered making my own balsa sandwich panels but in the end I don’t need the compression strength of balsa on the furniture and the poly core is more flexible for creating compound curves.

Finally the Evinrude Etec 25’s and 30’s were on show, they wont be available until later this year but I don’t need them for at least a year. They are both the same block so I will go for the 30’s, same weight. Not a lot of information on them, no torque numbers yet, final gear ratio, fuel economy, just weight 64kgs for a 20 inch shaft electric start model, 15 amp alternator. And about $6000 each, which is on a par with Honda 20’s Yamaha High Thrust 25’s and most others in this size. Still by far the best numbers for me so I think this will be the way I will go. There eventually will also be 10hp models for the tender so again I will probably choose this option also.

Today I got the starboard inside hull panel bogged so it is at the same stage as the port hull (except I am still to glass the inside of the front 2 voids) and I continued working on the catwalk. I have glued the foam stacks together and glued the conduit into them and glued one of them to the catwalk, I will glue the other on tomorrow but I may shape this first one first. 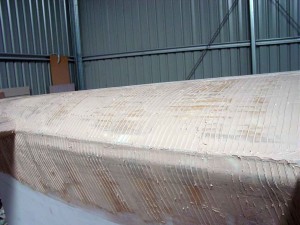 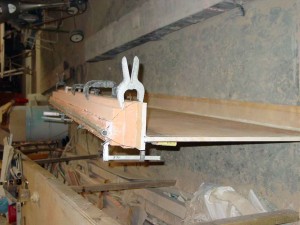 Once I have the sides on I will cut the shape of the forebeam into the front, trim it to length and cut the foredeck shape into the back of it so it is ready to fit as soon as the shaping is done and it is glassed. I also still have to glass a ladder into the base for stiffness and duflex walls into the top to create the ladder chamber and the anchor chain box.

I want to finish the front of the boat so I can move on to the cabin roof. I hope to get this done this month. I really want to finish the shell this year, so cabin roof on, cabin sides on, flat decks on and rear steps in. Once the shell is done, the rest of the major work other than fairing and painting is inside the boat, making furniture, plumbing and electrics and then linings. There is still a long way to go on this build.