Today was a low visual impact day. I worked most of the day at setting out the first of the frames for the cabin top mold. As is usual with set up work, it is slow going (at least it is with me as I measure and measure again, level and check again…you get the idea) and little to show for it but all necessary to a good end result. The better the prep work the better the result.

I also spent a good hour having lunch in my now almost completed cockpit and daydreaming of looking out of my boat at anchor somewhere. I have only the rear seat backs to kerf, glue and glass down to finish the structure. I also have to run a rim around the cockpit seating and to backfill some more edges and hinge lids but there is no hurry for that. I am also waiting on some LED rope light arriving from China, I will be running white rope light under the rim of the entire cockpit that will shine down and illuminate the cockpit with ambient light at night, it should look fantastic. I will also have blue rope light under each of the transom steps and warm white will run around the edge of the cockpit roof liner and under the steps into the hulls. I may also run some under the roof lining in the bedrooms.

When I eventually stopped admiring my own work and got onto the next job I started by levelling the 2 halves of the strongback to each other so that the frames can span them and stay level both across them and along the length. The legs were set for the floor of the last shed for when I made the hulls. The floor of this shed is actually better levelled than the last so the legs of each made one about 10mm higher than the other. Instead of the time consuming task of re setting the legs I decide to just pack the legs up where needed to bring the low ones up to the right height. This was a little frustrating at times, similar to when I was levelling the hulls to join them, a packer here and the level would be out there, a lower packer fixed that but meant it was out again there.

In the end I compromised on a couple of levels and got them to with 3mm and got it almost perfectly level across the 2 but slightly lower (3mm) at one end that the other. I also learnt not to worry about such discrepancies. As much as I like things to be perfect I have long learnt on a build like this that measuring to the mm is not necessary. Nice especially for the piece of mind but not essential to a good finish. The glue in places is more than double that.

Once I had the base frames level I screwed sheets of ply all the same thickness to the frames along each side to form the edge that the rim of the top will go down to and along the front. I can then set out a stringline to form the middle and to draw the shape of the top outline as a guide when planking drawn off that centreline. But before I can run the stringline I have to establish a centre and this is done by attaching the first frame halves to the jig and the line of centre of it becomes the centreline no matter if it is actually centred or not so long as all the others match it. I have decided that the most important shape of the roof is that where the main bulkhead is as this is the only point where the roof attaches to an immovable panel or shape (the edge of the bulkhead has a uni rope in it so it cant be trimmed) so it must match as close to exact as possible. If I am a little out anywhere else the panel of either to roof or the cabin sides can be pushed or pulled to match in the same way the hull sides to the curved hull to deck panel can be.

Before I could attach these 2 frame halves to the jig and get started on the mold I traced their shape onto an mdf sheets (one of the temp bulkheads no longer required) and cut them out. The last temp molds are repeated aft of the main bulkhead to retain that final shape from there back over the cockpit. Once I had one set cut I can use them to make a couple more sets as I figure I will need 3 sets rear of the main bulkhead for the cockpit roof. I then attached planks along the bottom edge of the most rear (and largest) mold halves and screwed them at roughly square and middle of the 2 frame halves. I already knew they would be level but that didn’t stop me checking and rechecking, old habits. 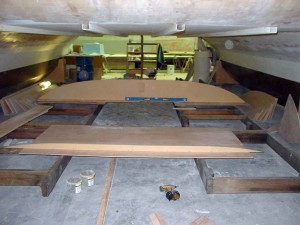 With that one in place all others will be measured, squared plumbed etc to that one. It doesn’t matter that they are not exactly centre of the jig so long as they are all centred to and squared to each other. I did the same for the smallest and most forward of the mold halves but started to run out of time so tomorrow I will run a stringline and start measuring the rest of the mold to it at the correct spacing (the plans tell you them) and square to the stringline and square to the ply floors I have attached (because they are also level).