The Strongback is made from second hand 150mm x 50mm hardwood, 40 metres at $8 per lineal metre so a total cost of $320 plus $80 to deliver the 80km so not a bad deal. It is recommended to use second hand timber for 2 reasons, first it is cheaper but more importantly as seasoned timber it is unlikely to move (warp or distort) as it will already have absorbed or dispelled moisture, new timber is likely to “settle” and move. We bought 6 7 meter lengths and I docked the ends of 4 of them (I bought a cheap 210mm docking saw $59.00) so they were square and the same length (actually 2 were 7mt and 2 were 6.8mt). I used one of each length on each side and so that the joins would not be opposite each other I used one short length on the back left and one on the front right. I then cut the other 2 lengths into 12 1 meter cross beams and 16 legs.

The strongback ended up at 13.8 meters long and 1.1 meters wide. the legs are 350mm each and I used the legs to level the strongback by varying the height at which they attached to the frame according to what the level showed was needed (its amazing how far out of level the floor was, it slopes forward by 3cm over 13mt, maybe they build them that way on purpose?). I used 100mm self drilling batten screws with hex bit head (you sometimes get the bit with the pack of screws depending on the brand) attaching the rails to the crossbeams and broke 2 bits screwing them in, and needed to drill out a guide hole for each screw. A tip to help the screws in is to run the screw thread over a bar of soap to lubricate it. I used the power driver to get them in but because the timber was so hard the drill wouldn’t get them in all the way so the last 5mm or so would be done with the ratchet (socket) spanner. I used 75mm 5/8 bolt head screws to attach the legs and used a socket set to tighten them. I also stripped 2 sockets tightening these and ended up using ring spanners on the last few.

The timber we chose was extremely hard (hence the name!!) far harder than I expected but there was a lessen here, don’t skimp on cheap tools, they don’t last or cant handle heavy loads and if you replace cheap sets a few times like I did with the sockets, it will cost you what a decent set would have anyway. It is recommended that the strongback is bolted to the ground so it cant move when building the hulls and you can also use this to square up the frame, which it should be close to anyway if the rails are the same length and so are the cross beams, but it can still be obliquely skewed. If the frame measures the same from corner to opposite corner on each side then it should be square. If it isn’t you can bolt down one end then move the other end until it is square and bolt it down there. I am yet to bolt it down but will do it later using some L brackets and masonry expanding bolts. 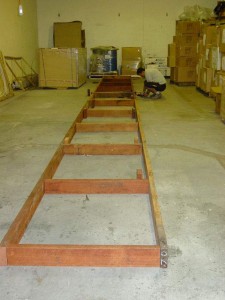