But first I had to trim the panel by about 30mm, 15mm on each side. I raised it up as far as it would go considering it was too tight and then marked a line down each side and trimmed it by the amount needed. To ensure I took the same amount off each side I set a fence on a circular saw and trimmed each side up to the point where it curves out at about halfway between bulkhead 5 & 4 to accommodate the hull flare. I will still need to trim that section a little but will do that once I have the deck secured up to bulkhead 5 as this last section also has the kerfs to bend up and round at the front.

With the panel trimmed it was time to glue it up. I raised it again to be sure it fit, there was still a tight section so I ran the jigsaw down the join to loosen it up but was a little out in my angles and I made a bit of a mess of one area that need additional trimming but fortunately it will be easy to fill or glue to repair and will then become invisible and because it will be under fibreglass tapes it wont in anyway effect the end result, it is just a little more work, but no more than an hour or an extra amount of fill in the otherwise filled join anyway.

I lowered the front section so that it was about 150mm below bulkhead 5 and started buttering the bottom of the bulkhead. I then started raising it again and placing the legs in place. I used the pallet trolley and a 50mm x 75mm plank of wood to raise the deck. A warning here, always spread the load with another plank running along the deck, I forgot once and put a fairly deep dint in the deck that I will need to fill, fortunately I didn’t break the glass. I raised it up on 5 legs (I was originally thinking 3 max, but I needed them more closely spaced to ensure the deck was hard up against the bulkhead. 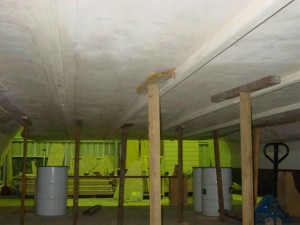 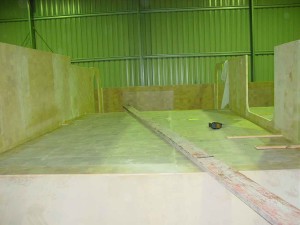 The deck pressed up into place squeezed excess glue out, which I then cleaned with my scraper. This is important because I have to run uni tapes along each side of each bulkhead so the less preparation needed the less I have to sand later over the not yet fully secure deck. I then pushed the bulkhead fore or aft where needed to straighten it up. Graeme and his father (Graeme is contemplating building either a Schionning or a Spirited cat) turned up for a look at the progress and they helped me by sighting down a straight edge to tell me where the bulkhead needed to be pushed (fore or aft in places) saving me the extra climbing up and down and also helping me by telling me when the legs I was placing had properly pushed the deck up onto the bulkheads.

I then set about repeating the process on bulkhead 6. I lowered the most rear legs to widen the gap between the bulkhead and the deck and I removed the trailer which up until then I had left there as a safety barrier in case the deck fell off the legs, it would stop at the trailer and not crush me! Once I had the space opened I buttered the bottom of the bulkhead with glue and raised the deck back up, moved the bulkhead fore or aft where needed to straighten it and cleaned up the excess glue. I used the glue that I had cleaned off in the chamfer joins that looked to be in the correct position, about 400mm worth. The rest of those joins wont be done until after I have glued up the rest of the deck, then after that is done I can start on the taping, both the torsional strength uni and the double bias coving glass. Each bulkhead has a different amount of uni’s depending on the engineering and the loads that the area will be under. 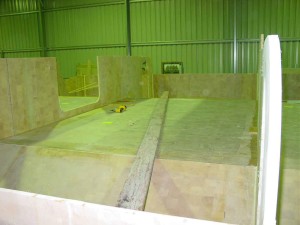 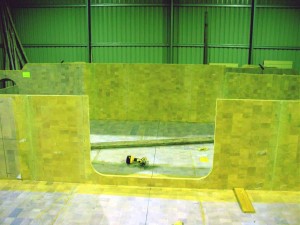 With any luck I will have the rear bulkhead glued to the deck tomorrow or Wednesday. I am hoping to start on the glassing next weekend. Jo and I want to have a bbq on the deck to celebrate another milestone.