Bridgedeck not glued yet.

I have coved and taped the deck webs onto the forward spanning bulkhead, square and plumb. I then set about cutting the kerfs into the front of the deck. I am cutting them 50mm apart for 1.15 meters. I cut 24 kerfs, probably one too many but I wanted to be sure that I didn’t end up 1 short and struggling to get the bend started in the right place. This way if I didn’t need the extra kerf it will just fill with glue and end up setting back correctly anyway. The kerfs took a lot longer to cut than I anticipated. It would have been far easier to cut them on the ground before raising the deck but that presented 2 bigger problems, firstly it was easier to get the trailer under whilst I had the help of others who may not have been available when I was finished cutting the kerfs but more importantly, once the kerfs were cut it would have made it far more difficult to lift that end of the deck, you cant put any weight on the kerfs until after the deck is glued up and I then bend it in the direction it needs to bend and is glued up. You certainly cant pick it up from that end or you will just snap it at one of the kerfs, all that is left is about 2mm of balsa and 1mm of glass. So I had to cut the kerfs in situ. I have braced the underside of the deck so that the kerfs cant break with gravity.

Cutting the kerfs parallel was just a matter of marking the ends of a plank of timber so I could use the previous kerf as the mark and screw the plank down as the guide for the saw for the next cut. I set the saw to a depth leaving about 2mm of balsa so as to minimise the sharp edges on the outside of the curved panel to make fairing a little easier. The more balsa you leave the more gentle the curve, so lots of less deep kerfs and you still end up with the same curve but less prominent changes in direction of the panel. I cut a test panel of the same material first and decided on 50mm spacings (I discussed them with Brett at the Schionning builders seminar after the boat show and we pretty much agreed on 50mm-75mm but I decided on 50mm) and it curved nicely so went with 50mm without even testing 75mm. It means 50% more kerfs so I could have cut about 18 instead of the 24 which not only meant more cutting but will also mean more glue to join them back up again but I am happy with the way the test panel curved so I am sure the deck will curve nicely. 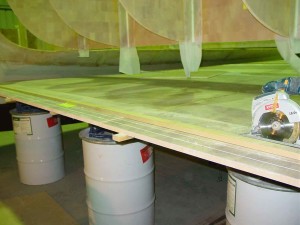 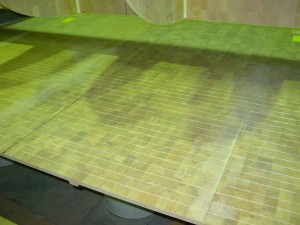 Once all of the kerfs were cut I marked the centreline onto the bulkheads and onto the bridgedeck to make lining up the deck easier. I also removed the peel ply from the deck ready to glue. Using the centreline I tried to line the deck panel up a little better. It is difficult to move a panel this size from side to side on your own as it acts like a big lever, a small movement at one end is countered by an equal movement at the other end. I had to move just one end though. Anyway I got it a little more centred and was able to lift the stern up almost correctly into place, it is just a few millimetres out. The panel appears to be oversize in places along the length but not all the way, so my solution may be to lift it up into place and then just running a jigsaw blade down the join to free it up where it sticks. If it is any tighter than that I will need to lower it again and cut it after I have marked the really tight spots that need cutting. It isn’t much but is enough to make getting the panel up exactly into place difficult. 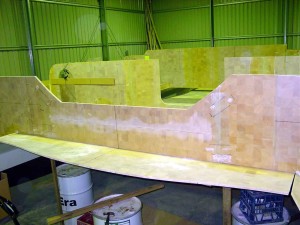 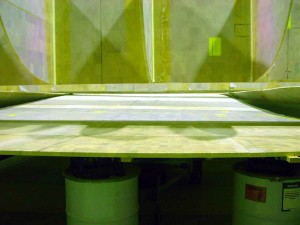 My method of raising the deck up so far has just been to physically manhandle the deck up and place the leg into each corner but as I go along the hull from the stern forward 1 bulkhead at a time (I am only bracing at the bulkheads otherwise I may get high spots in the deck between the bulkheads) is to use the 500kg pallet trolley as a jack and using a 50mm x 75mm timber leg, jacking the deck up high enough to get my correctly measured leg under and into place and lowering the trolley down and repeating the process until I have at least 2 legs under each bulkhead on each side. Then I will remove the trailer and put legs under the middle of each bulkhead before attempting to walk on the deck again.

If this all works out dry or after I have trimmed and raised the deck dry again until it fits easily, I will then lower it again, spread glue onto the underside of the bulkheads and raise it up and braced tightly to set. Hopefully I should get this done tomorrow. I never seem to be able to work as fast as I anticipate I should.