I have applied the last tape, so the starboard hull is now officially ready to turn. There is nothing more to do to this hull until it is turned. After I turn it, I still have the keel centre to tape on both hulls and then I can start to do things like add the keelson and maybe the soles before I join the hulls. Also before I join the hulls there are a number of other jobs I can do such as the daggerboards and cases, the rudders and kick up boxes, maybe even such things as the cabin top, forebeam and targa bar. I have finally decided that I will move the hulls to a new warehouse before I join them and I have 5 months lease left on the current warehouse so unfortunately from an interest point of view I wont get to join the hulls until May. But the upside is that the weather will have cooled again and that will mean I have more time to get things done before tapes (resin) and fillers go off. 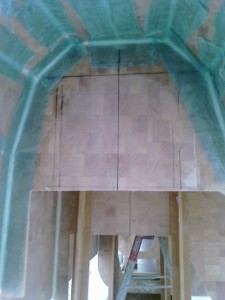 The second hull has taken 237 hours over 4 months but I could easily have done it in 3 as I did very little over the last 2 months. I deliberately slowed down as I tried to figure out where and how I was going to join the hulls. So in all I have taken 660 hours in just over 12 months to complete both hulls and an extra month to tape the panels together and a week or so to build the strongback.

Now I still have to make the cradles for the hull and turn it but I figure that to be 2 hours or maybe 3 tops. We turned the first hull in just half an hour! I may not actually turn the hull before I move it. I will have to forklift the hull onto a flat bed truck to move it and it may be easier upside down anyway. Which may be ironic. I may actually have the turn the other hull back over (back to upside down) to move it!

Anyway, these are problems for 2007. For now, I would like to thank everyone that is reading the site and especially those that email and I want to wish all of you and your families a happy and safe festive season. Next year will be very exciting. The hulls will be joined and we will finally have a catamaran.