Believe it or not, it is the start of another season. These 3 month slabs seem to be flying by. At the start of each season I check out the sample plate with Pureseal on hanging under the pier in front of where we live. I got quite a shock when I lifted it this time. I actually lifted it out about 3 weeks ago because I was due to meet the importer again at the Sydney boat show and I have been reporting my findings to him, so I needed to know how it was fairing. It looked quite different 3 weeks ago! Having said that, the change was not a failure. The 2nd sample (the 1st failed dismally as the picture below shows!) has now been in the water 21 months. After finding it covered in green slime I found that the slime is very superficial and not well attached and comes off quite easily leaving a more well adhered layer of algae below it. This layer also comes off with a little more rubbing with nothing more than the pad of my forefinger.

But very fine scratches are now on the surface after being rubbed each 3 months, so I find that I now have to give it a little more vigorous rub with a cloth, still no more than 30 seconds to clean it, which is all the well considering the size of the sample and the size of my hulls, but nevertheless I still consider that this is still a success. I doubt the 10 year claims but in 3 months the sample is 2 years and I would suggest that it could last 5 years at the rate of degradation so far and that would be a major triumph. Considering what is involved in slipping and de-fouling old antifoul then recoating 2 hulls with new antifoul every year to 18 months or 3 times in 5 years, and the cost and time this would take (I estimate at least $2000 to slip, clean and reapply new antifoul), and what this alternative offers, a rub once every 3 months with little more than my hand or at worst a mop or a rag, for little more cost than the time it takes to do it, for 5 years.

On the boat I removed the peel ply I attached to the glassing of the bedroom side of BH4 and glued the bedroom walls in place. I had already measured their position a few weeks ago and marked them on the bulkheads and floor in readiness for them being glued in. The peel-ply had a bubble here and there, very few and not a major problem but the pictures below show what a bubble in the peel ply does. It leaves what looks like a hole in the resin, and in some ways it is, and I suspect some filler would level it out again or I could just sand them out. 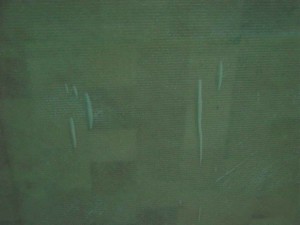 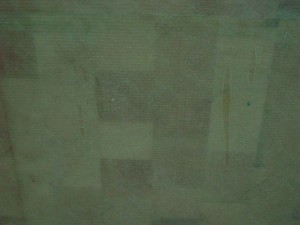 With the peel ply off I got on and glued the bedroom walls into the boat. The walls are not both centred on the bridgedeck, that is one is closer to the centreline than the other. The port bunk will run athwartships and a queen bed is 200mm long. The end of the mattress will overhang the chamfer panel but because of the extra length required, the back wall is 100mm closer to the centreline than the starboard bedroom wall. The starboard bunk runs fore and aft and a queen bed is 150mm wide meaning I don’t need as much space on that side. The area inside the 2 bedroom walls is 600mm wide and will house the main anchor well in the front 600mm and behind them will be 2 300 litre water tanks, one in everyday use, the other only ever used on long passages. 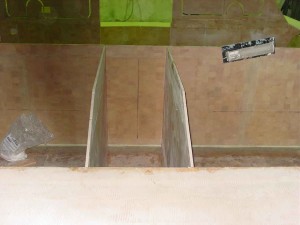 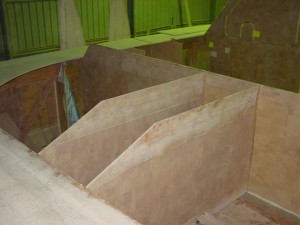 I cant screw the wall panels in from below (I cant make holes in the underwing as this ruins the integrity of the panel, you can fill and patch but I don’t want to ruin an otherwise sealed panel) or from the front because of where the D section bulkheads are inside the foredeck, (if I could even get to them because the foredeck hatches wont be cut in until the foredeck is faired) so I could only secure the walls from the other side of BH4 in the saloon and one screw on an angle through the top on the front. So because of this I have to wait until the glue is set before I can cove and glass the walls in. I held the walls in place along the bottom with large blocks of heavy hardwood either side as stays, just sitting there not screwed into the deck because again, I cant risk piercing the deck.

Doing 1 wall at a time, I buttered each end of each wall and by placing the front edge in place after glue is on the edge and I pushed forward as hard as I could and pushed back on BH4 to create a gap so that the back edge glue would not be all scraped off, which worked to a degree, then I raised the walls off the floor about 100mm and held them there with chocks while I butter the underside of the walls before removing the chocks to lower the glued walls onto the floor. I then screwed the walls in place through BH4 and BH3 at the top while pushing down hard to push the walls against the floor. I then pushed more glue into the joins where needed and scraped excess glue that had squeezed out off with a scraper and made a cove with my finger. I repeated this on each wall and left them to set in place after checking they were square to the floor and to each bulkhead.

With little holding them in place I will need the glue set in order to cove and glass them, there is no way I could do it until they are set. The glue should be set enough that I could start on them tomorrow. Once they are coved and glassed they are in for good and another task is ticked off as the floor plan takes final shape.