Beam in Place Ready to Glue In

I needed some help lifting the side deck off the port hull before I could do any further work on the beam so while I waited I got on with another little task you may have noticed that I was stalling on. Trimming the dagger cases and gluing them. Not a particularly taxing task but I have been stalling it. So today I got into it to find that as with nearly all tasks I put off, that it went smoothly and easily.

I trimmed the case halves with a jigsaw and a line marked by eye. And although I wobbled here and there it will all glue together well and I am happy with the fit. I started by masking tape 25mm wide strips of 3mm mdf to both sides of a dagger to give me 3mm clearance each side when the case halves are fitted together. Then with a case half in the original mold just to give me somewhere stable to sit it I placed the spaced dagger in the half and by eye I marked the case to the centreline of the leading edge of the dagger and I cut the case down. I then cut a second case half down by the same amount and fit it in place but found I still needed to trim a little more off. Which I did and then reset it, marked any high spots in the jigsaw cut that were stopping the case halves meeting the way I needed and trimmed them. With the cases fit how I wanted I clamped them together to be sure they would pull together correctly and still give me the space I needed all around the dagger. It all fitted well. The instruction manual says to not trim the front edges square to each other but instead to have the inside corners touching but the front of the join more open so you can gently edge glue into the join without it oozing out the inside of the case.

Once I had the first 2 case halves fitting to each other to make up a case I gave the bottom inside 600mm a coat of Coppercoat (antifoul paint). I have been told that the inside of the dagger cases are too dark for anything to grow but I figure it is just a coat of paint so it certainly cant hurt and this is just insurance. I trimmed my 25mm ply case backs to size. The plans say they should be 60mm wide, I had them at 80mm. I measured the back of the case outside edge to edge and sure enough it was 60mm. A quick run over the table saw and I had them trimmed (1 for each case). I then glassed one side of each with 3 layers of double bias, these will be the inside of the case and I guess 3 layers because they will be rubbing each time the dagger goes up or down. The outside will be glassed once the cases are glued together.

Hopefully I will glue and glass these shut tomorrow and I will have my first case ready.

The guys finished what they were doing and helped me remove the side deck so I could get to work on fitting the beam. Once I was able to move the port side of the beam down onto the bulkhead I could get a better idea of how much more the beam needed trimming and the bulkhead slots needed extending. I quickly saw that I needed to extend the slots about 50mm each side and trim the beam about 30mm – 70mm (the amount increases at the front of the beam as the hull tapers). I extended the slots and pushed the beam over into the middle lining up the centreline on the boat to the centreline on the beam using a straight edge on a duflex offcut. The beam is pretty close to exactly centre now, it is about 5mm off centre and needs to move to starboard that amount to be exact. I will move it across when I glue, I have marked the beam to show where it needs to be to move just the 5mm. I just have to get the height on each side measured to be sure it is being glued level and then I will glue it and clamp it in position to set. 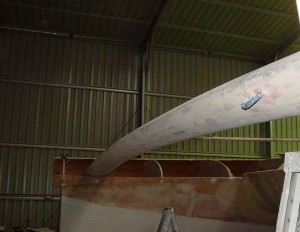 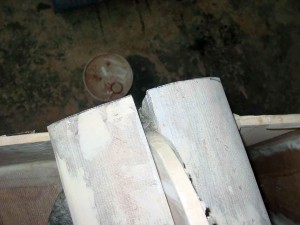 Hopefully I will also get this done tomorrow so that I can tick another milestone off the list. Of course the beam needs quite a lot of glassing and not all of it can be done until the strip planked sections are glued onto the boat.